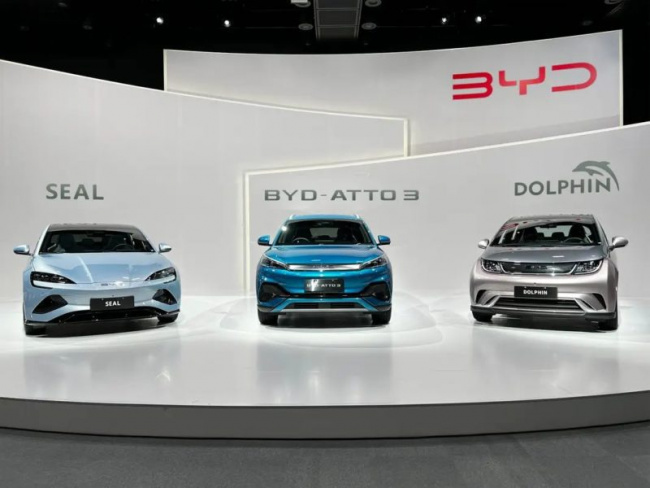 Germany’s major car brands have been producing cars in China for decades. The world’s second largest automotive manufacturer Volkswagen started making its cars in China in 1985 and now produce over three million cars in their Chinese factories each year.

China is also VW’s biggest car market with over 50% of its sales going to Chinese customers.

However, in a sign of the times, Chinese electric vehicle maker BYD is now looking to reverse that trend after the Wall Street Journal reported it was in discussions with Ford to purchase its Saarlouis plant in Germany to make electric cars.

Driving this seismic shift in the global auto industry is the blistering growth in EV market share around the world and in particular in Germany where battery electric vehicle sales hit 33% of all new car sales in for the month of December. The December number is especially impressive in the context of Germany’s 2022 annual figure of 18%.

The WSJ report says that Ford’s German management will travel to China next week to discuss the sale of the German factory where Ford produces the compact petrol powered Focus model. Ford has previously announced that production at Saarlouis is scheduled to end in 2025.

“We’re investigating various options for the future and sustainable use of the Saarlouis site. As part of this process we are in ongoing discussions with a number of potential buyers and have nothing further to add at this time,” a spokesperson for Ford said.

The speed at which German consumers are moving away from petrol and diesel cars should be sounding alarm bells in the offices of German automotive executives who have been relatively slow to make the transition.

For instance, EVs made up just 6.9% of Volkswagen’s global production in 2022, up just 1.8% from 2021. The huge discrepancy between the market share and VW’s production numbers means that Germans, who are traditionally very loyal and proud of their car brands, are now turning to EV companies like BYD and Tesla.

If the deal proceeds the price that BYD ultimately pays for the factory will be very closely watched and possibly set a precedent for future such deals.

In 2010 Toyota and GM sold their jointly owned NUMMI factory in Fremont California to then startup EV maker Tesla. The NUMMI factory, which by 2010 had produced eight million petrol and diesel cars and trucks since opening in 1984, was sold to Tesla for song at just $42 million. A fraction of its book value at the time.

Because manufacturing electric vehicles is very different to manufacturing internal combustion engine vehicles, much of the equipment at legacy auto plants cannot be utilised for EV production.

This and the fact that the world is rapidly moving away from ICE vehicles means that legacy auto factory asset valuations may not be entirely accurate on the balance sheets of the world’s largest car makers.

The unstoppable shift to EVs will mean we will see many such deals in the coming months and years ahead.

Depending on the price, a factory sale between Ford and BYD may cause some tough asset revaluations on some of the world’s biggest balance sheets.

An overview of J.D. Power’s survey of car owners Ford Escape owners love the style and safety of their SUV The Ford Escape offers a lot of options to its owners Ford is one of the most popular American automakers, and one of the reasons for the company’s popularity ...


View more: Ford Escape Owners Love the Style and Safety of Their Cars


View more: JD Power’s 2022 Midsize Truck Rankings: Which Is More Important to You – Quality or Appeal?

The Ford Explorer, Lincoln Corsair, and Lincoln Aviator are affected.

About the latest recall Three Ford and Lincoln SUV models with a recall in 2023 Similar recalls plagued Ford in 2022 Ford led all automakers with 67 recalls in 2022 See if your vehicle is affected by the latest Ford recall Recently, we reported that Ford was the most-recalled ...