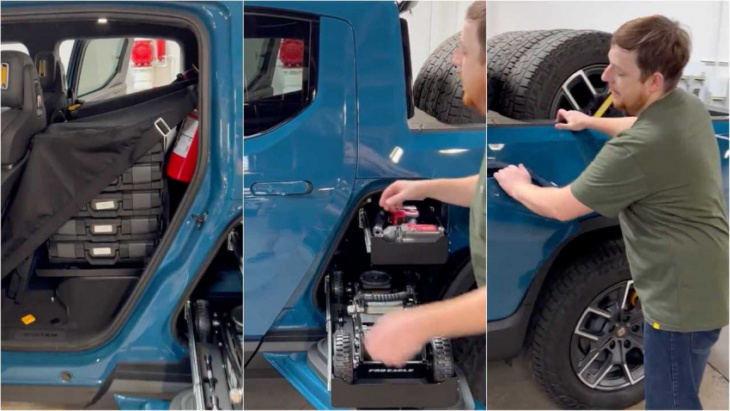 As Rivian is ramping up production of the R1T, R1S and EDV, the company obviously needs to step up its game when it comes to service.

As with other EV startups, including Tesla, Rivian has several ways to service the vehicles it sold across the country: the traditional way via its service centers, via mobile service vehicles that can come to the owner wherever they are, and through over-the-air (OTA) software updates, depending on what needs to be done to the car.

Rivian founder and CEO, RJ Scaringe, provides a look at the company’s new electric vehicle service fleet in the latest video he posted on Twitter. Shot at the service center in Costa Mesa, California, the video reveals a small fleet of R1T and EDV service vehicles outfitted with all the necessary tools to provide repairs to Rivian EVs.

RJ introduces viewers to Phil, who is the most fitting person to talk about Rivian’s service vehicles as he led the development team behind them. He starts with the Rivian van, and it’s interesting to see it with a different paint scheme than the one used by Amazon.

As expected, the Electric Delivery Van makes an ideal service vehicle, having tons of space for all kinds of diagnose and repair tools, including wheel and tire equipment and a crane that allows technicians to lift heavy items in and out of the van.

The EDV also has several clever storage spaces for heavy items, including a floor compartment, and a swing out stand for the jack. It’s a pretty neat service vehicle overall.

The video then presents the R1T service truck, which is designed to reach customers located even in the most remote places, thanks to its off-road capability. Phil says Rivian tried to package much of the same equipment found inside the service van, using the electric truck’s bed (which features four spare wheels in this case), gear tunnel, and rear seating area that has been converted into a cargo area.

We imagine Rivian is making good use of the R1T’s frunk as well, even though we don’t get to see it popped open in this video.

Californian electric vehicle start-up Rivian has signed a deal with none other than automotive behemoth, Mercedes-Benz Vans, that will see the two partner up and create a range of Mercedes and Rivian-branded large electric vans. Officially, the two have signed a Memorandum of Understanding that lays out the bedrock for ...

American EV automaker Rivian is rolling out a new all-electric fleet of mobile service vehicles to support the growing number of R1T pickups and R1S SUVs hitting roads around the US. In addition to the images we’ve captured below, you’ll see a video posted by CEO RJ Scaringe, showing ...

The Rivian R1T appears to be a compelling EV in nearly every way, but is it practical to own?


View more: Rivian R1T Electric Truck: How Does It Compare To Owning A Tesla?

The EPA says the R1T is more efficient and has more range than the Ford F-150 Lightning.

Want a Rivian R1T Explore? You’ll Have to Explore Other Options