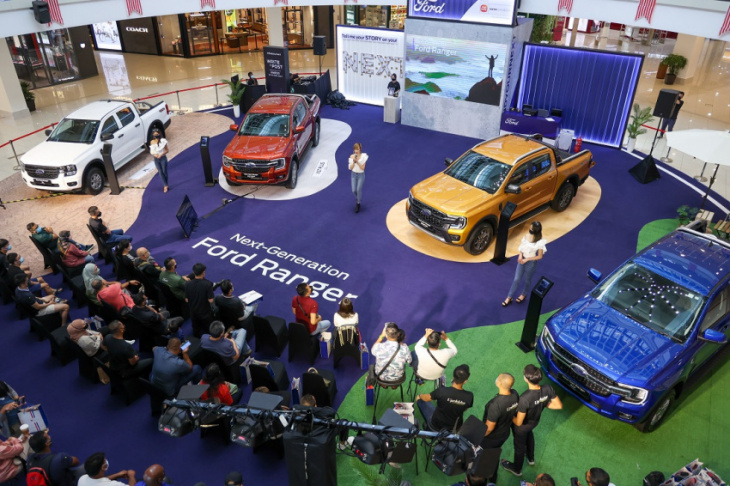 The new Ford Ranger is making its rounds on a nationwide tour ahead of its showroom launch. Sime Darby Auto ConneXion (SDAC), the sole distributor for Ford in Malaysia, will be offering the public a preview of the next-generation Ranger in Kuching (7 – 11 September 2022) at Vivacity Megamall, and in Kota Kinabalu (5 – 9 October) at Suria Sabah Shopping Centre.

This latest Ford Ranger is touted as the smartest Ranger. With an enhanced user experience, it allows owners to transition seamlessly from home or work to their vehicle. The new-generation SYNC 4A1 infotainment system and large-format screens that mimic smartphone features push the boundaries of what a smart pickup should be. 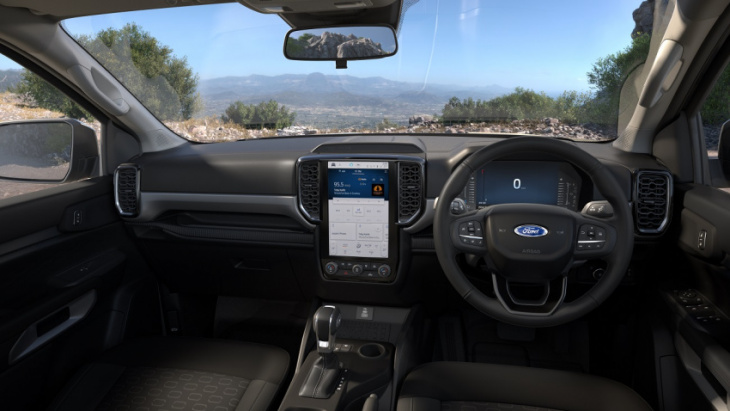 The next-gen Ranger has replaced the analogue instrument cluster with an 8″ digital instrument panel that can be customised. Depending on the truck variant, owners can toggle between layouts showing information such as driver-assist technologies, tachometer, and extra gauges. There’s also a ‘calm view’ which removes information on demand from the display. Additionally, there are graphics that feature realistic body-style avatars available.

As the Ranger has on- and off-road driving modes, the instrument panel also displays different themes for each drive mode, complete with animated mode changes. 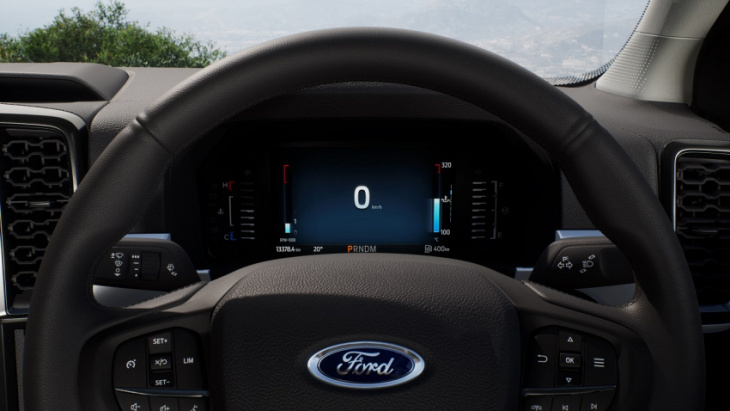 But beyond these, the SYNC 4A system is designed to be smarter and more intuitive. The system offers  wireless Apple CarPlay and Android Auto connectivity and is easier to navigate thanks to the 10.1″ or best-in-class 12″ infotainment screen (depending on variant). Further, there is a customisable split-screen setup with an information-on-demand panel at the bottom of the screen. This displays key information such as native or connected navigation2, the connected smartphone, etc. The smartphone can be wirelessly charged and connected to SYNC 4A via the charging pad in the centre console. Smartphones also can be charged via cable to a USB port or the 12V/240V sockets and the 150W inverter that brings power to the box.

Higher up on the windscreen is another USB port that is designed to power an external GPS or dash camera. It also can be used to charge a smartphone but this outlet isn’t connected to the SYNC 4A system. Also depending on the variant, located at the load box are the 400W and 12V sockets that make DIY jobs more convenient when power source is needed on the outside. 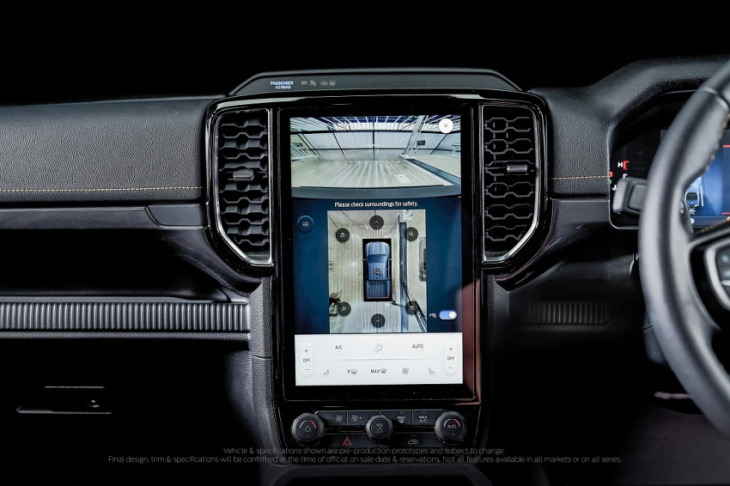 Further, the design team chose a large-format tablet screen because it allowed for a good depiction of navigation while still leaving room at the bottom of the screen for things such as climate and entertainment controls. The move to a more digital set-up also meant that traditional driving mode controls are now in their own dedicated display on the SYNC screen. For example (and depending on variant), with the press of a button, the driver can get to the Ranger’s dedicated off-road screen that monitors the driveline, steering angle, vehicle pitch, roll angles and other controls.

Moreover, the cabin climate and entertainment can be controlled via the SYNC screen, with additional physical controls mounted just below the screen for quick and easy adjustments.

The screen is also linked to a 360-degree camera to make parking in tight spaces easier, or to assist in negotiating tricky terrain. The system allows the driver to see what’s in front of or behind the vehicle as well as a top-down view of the surrounding area including blind spots.

Another first-in-class feature is the electric parking brake in the Ranger WildTrak. This change also provides the opportunity for an improved advanced driver assist system (ADAS)3. Another segment-first offering in the WildTrak is the Matrix LED headlights. This advanced lighting system includes auto dynamic levelling and speed dependent lighting that adjusts the intensity of the beam accordingly. The headlights also offer both static and dynamic bending capability as well as glare-free high-beams, which help block light that could otherwise temporarily blind other drivers and cyclists.

You can register for the upcoming preview events of the next-generation Ranger debut tour in this link.

1 Not all SYNC 4A features are compatible with all phones

2 Connected built-in navigation is offered with a 1 year of complimentary service. Precise local market offerings will be shared at launch.

3 Driver-assist features are supplemental and do not replace the driver’s attention, judgement, and the need to control the vehicle. Automatic emergency braking detects pedestrians, but not in all conditions, and can  help avoid or reduce a collision.

Ford Ranger and Everest wait times update! New ute and SUV already a sales hit for the Blue Oval, but how long is the line?