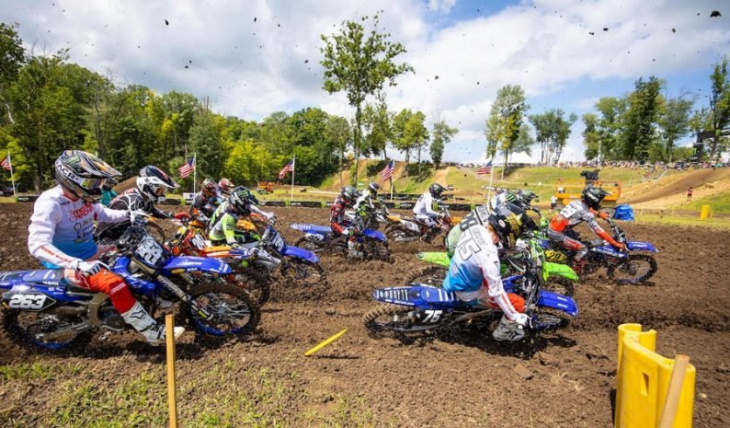 A total of 23 riders composed arguably the most talented field of amateur prospects to date for the program. A pair of motos were contested throughout the course of the day in front of an audience of key industry figureheads.

Team Honda HRC’s Chance Hymas, coached by Michael Byrne, put forth a dominant performance with a 1-1 effort that resulted in his first victory at the Scouting Moto Combine.

The combine journey at Ironman got underway with morning practices, interwoven by education sessions surrounding training, fitness and nutrition, as well as multiple facets of media engagement. Riders were broken up into four groups, assigned to one of four esteemed coaches — Byrne, Broc Glover, Chad Reed and Broc Tickle — who provided mentorship throughout the day.

Hymas Is Out Front Early In Moto 1

The key to Hymas’ success all afternoon centered on the start, where Hymas put his Honda out front early ahead of NSA Yamaha Factory Amateur Team’s Evan Ferry, who was making his first combine appearance.

These two riders were able to open a gap on the field in the opening laps and soon Hymas began to inch away from Ferry, who settled into second. A heated battled for third ensued between NSA Yamaha Factory Amateur Team’s Logan Best and Monster Energy Kawasaki Team Green’s Preston Boespflug, which soon resulted in Boespflug making the pass after a couple laps.

Back up front, Hymas quickly assumed firm control of the moto and enjoyed a multi-second advantage over Ferry.

However, all that was erased when Hymas tipped over. He remounted and got rolling quickly, but the miscue allowed Ferry to assume the lead as Hymas resumed in second. The Honda rider quickly tracked down his Yamaha rival and reclaimed the top spot less than a lap later, while Boespflug saw his podium hopes slip away with a tip over of his own.

With the lead back in hand, Hymas methodically rebuilt the gap he established in the early stages of the moto.

He went unchallenged through the remainder of the moto and cruised home to the  victory by 7.2 seconds over Ferry, who maintained his strong hold of second the rest of the way despite a late push by Fineis to close the gap from third. 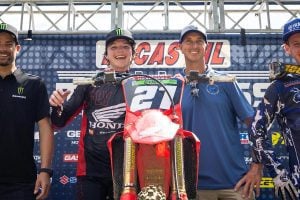 After his victory at the combine, Chance Hymas will make his Pro Motocross debut with Honda HRC next weekend. (Align Media photo)

It’s All Hymas In Moto 2

Hymas was on point yet again as the gate dropped on the second moto of the day, storming out to the holeshot to seize early control of the moto that he’d never relinquish. Bennick enjoyed much better fortunes and easily slotted into second behind Hymas, while MJ Racing KTM’s Matti Jorgensen started third.

After a strong runner-up effort in the first moto, Ferry faced an uphill battle with a seventh-place start in moto two.

Much like the opening moto, it didn’t take long for Hymas to march away from the field. While he lost touch to the lead, Bennick was able to put a stranglehold on second as he did all he could to keep Hymas honest and potentially take advantage of any misfortune.

Jorgensen’s hold of third saw him fend off early pressure from NSA Yamaha Factory Amateur Team’s Jayden Clough before EBR Performance Yamaha’s Julien Beaumer moved into fourth. Misfortune then struck Jorgensen just past the halfway point of the moto as he went down and ultimately retired from the race.

That allowed Ferry, who methodically marched his way forward, to grab late control of third.

From there the top three remained unchanged as each rider rode to the finish without any sense of pressure. Hymas went wire-to-wire to take win and complete the sweep 6.8 seconds ahead of Bennick, with Ferry a distant third.

The dominant outing by Hymas was punctuated with confirmation that Team Honda HRC will reward Hymas by allowing him to take the next step of his budding career, where the Idaho native will make his pro debut at the final round of the Lucas Oil Pro Motocross Championship next weekend.