Over the last 10 years, Chinese motorcycle manufacturer CFMoto has fully utilized its relationship with KTM. While producing models like the 790 Duke and 790 Adventure for the Austrian OEM, CFMoto employed that same LC8c parallel-twin to highlight its 800MT and 700CL-X lineups. That perennial powerplant will also beat at the heart of CFMoto’s upcoming 800NK naked bike. Still, the Chinese marque has even more in store for its NK range.

Thanks to patents dredged up by Bennetts Bike Social’s Ben Purvis, we now know that CFMoto intends to add a 1250NK to its naked bike ranks. The in-development supernaked will employ the 1,279cc version of KTM’s LC8 V-twin. That’s the same wundermill that powers CFMoto’s own 1250 TR-G grand tourer. 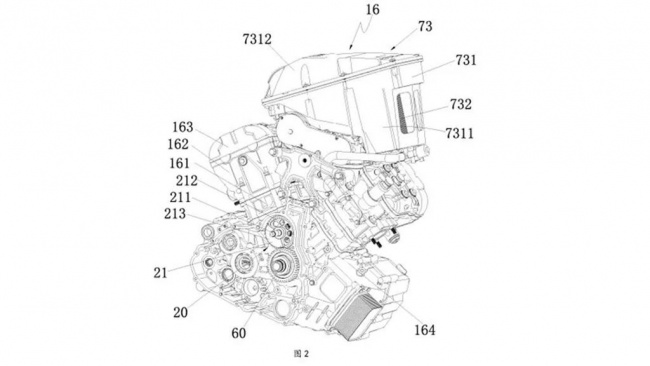 The LC8 produces a respectable 140 horsepower inside the TR-G. We anticipate the big-bore V-twin to command even more ponies in the 1250NK, but the supernaked will share many more qualities with KTM’s 1290 Super Duke R. Like the Super Duke, the 1250NK drawings depict the model sporting a single-sided swingarm. The Chinese supernaked’s exhaust header even replicates the meandering shape found on the 1290.

Despite those shared traits, the 1250NK is intent on forging its own identity. Of course, the range-topping naked will flaunt styling that aligns with the rest of CFMoto’s NK line. The differences between the Super Duke and NK go deeper than the bodywork, though. Both models favor a steel trellis frame, but CFMoto fashions its own unique design.

Even the license plate bracket separates the distant relatives, with the Super Duke offering an under-tail unit while the 1250NK springs for a swingarm-mounted version. The drawings also indicate that CFMoto’s top-tier model could tout a vertically-oriented TFT dash, hinting at a robust technology package.

While the 1250NK patents pique our interest, CFMoto still hasn’t officially unveiled the 800NK middleweight entry. With that in mind, we don’t expect the brand’s supernaked to hit the road anytime soon, so the model’s makeup could change between then and now.