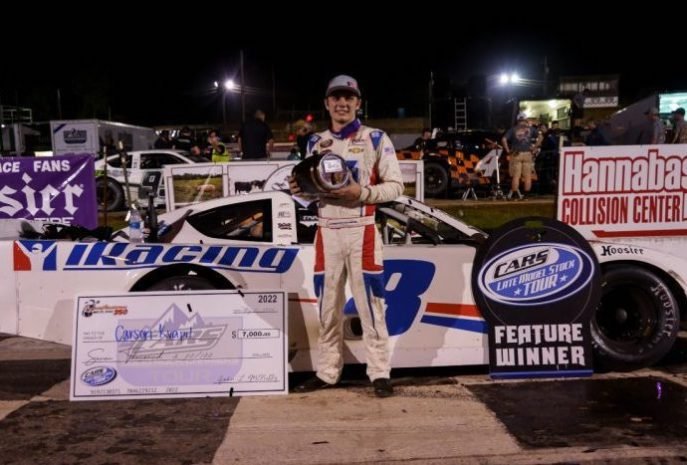 MOORESVILLE, N.C. — Following an accident on the cooldown lap of the CARS Late Model Stock Car Tour feature that saw him turn Zack Miracle into the wall, points leader Carson Kvapil has been suspended for the next event at Ace Speedway.

Kvapil was suspended for violating Section 1-A of the penalty code stated in the series rulebook.

Under this guideline, any member who performs an act or participates in actions deemed by CARS Tour officials as detrimental to racing or the series can be assessed a fine of $500, face a suspension or lose championship points.

Along with his suspension, Kvapil has also been placed on probation by the CARS Tour for the final three races of the season. Any additional violations Kvapil commits while on probation could result in further disciplinary action by the series.

For Garcia, who turned William Sawalich around on the final lap while battling for the lead, he will be allowed to keep his victory in the 100-lap CARS Pro Late Model Tour feature but must forego his total race winnings of $4,000.

After carefully reviewing every single angle of the last-lap accident at Tri-County and seeking the opinions of other race directors from respected series, CARS Tour officials determined that Garcia was too aggressive in his attempt to overtake Sawalich. The excessive aggression caused Sawalich to lose control and impact the wall,

“As a race director, it sucks sometimes trying to figure out what exactly happened,” Willard said. “You have to determine what is hard racing and what is not hard racing. What happened Friday night was a bad deal and I hate it for the Setzers. Both William Sawalich and Jake Garcia are very talented young men, but once we saw some better views, we all had a better idea of what happened, and penalties must be handed out accordingly.”

Replays of Saturday’s event can be viewed at carstour.tv.