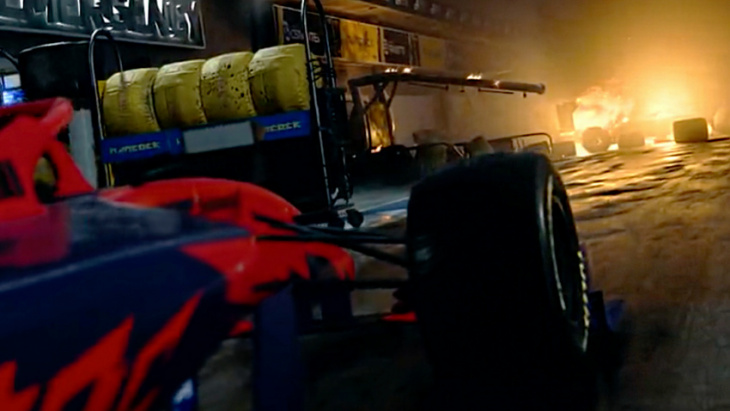 Riding the crest of F1’s global popularity wave, the makers of Call of Duty have announced that the upcoming release of Modern Warfare 2 Beta will feature a multiplayer map based on Singapore’s Marina Bay circuit. Wait, what?

As you can see from Infinity Ward’s sinister trailer below, the 6v6 map is centred around the track’s paddock and pit complex. Virtually everything has been abandoned, leaving viewers to ask questions like ‘What horrors unfolded here?’ and ‘Is that car on fire a Ferrari?’

“We understand that, with our agreement, Infinity Ward have announced they designed a Grand Prix Map as part of the #MWII Beta,” read a post on Call of Duty’s official Twitter account, mimicking the viral statement of Oscar Piastri last week. “This is right, and the map will be playable for the 2022 Beta. We will be playing on Grand Prix in #MWII this year.”

Tellingly there’s no F1- or team-based branding, and the map is officially referred to as ‘Marina Bay Grand Prix’. Wonder what it was about a multiplayer deathmatch that the sport didn’t want to associate with a race weekend?

No word yet either on whether Lewis Hamilton will reprise his cameo role from Infinite Warfare a few years ago.

Anyway, the full game is set to be released on 28 October, with some players getting early access via Beta trials in September. It’ll be available on Playstation, Xbox and PC.

This isn’t the only place where F1 is extending its influence, of course. Earlier this year it was announced that Apple is making an F1 film with Brad Pitt and Lewis Hamilton, while Keanu Reeves is doing a documentary about Brawn GP’s championship-winning 2009 campaign.

We understand that, with our agreement, @infinityward have announced they designed a Grand Prix map as a part of the #MWII Beta. This is right, and the map will be playable for the 2022 Beta. We will be playing on Grand Prix in #MWII this year. pic.twitter.com/8kbaSEkChU