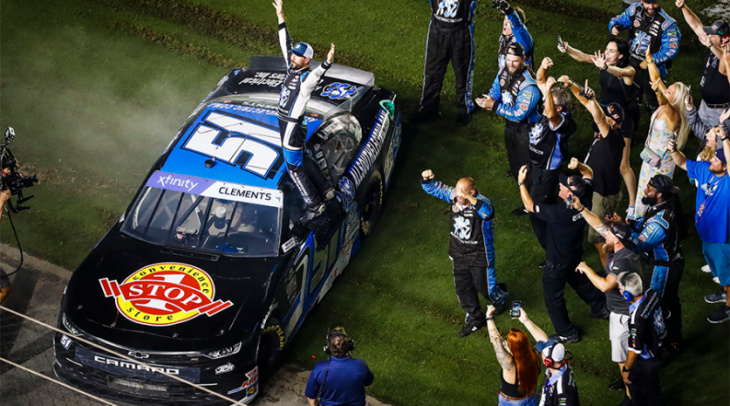 However, it was far from a typical NASCAR Xfinity Series race.

After a three-hour weather delay, the racing under the lights brought out a new breed of action.

Prior to 10 laps to go, there were only four cause cautions. However, the event event quickly turned into a roulette of race car calamity. 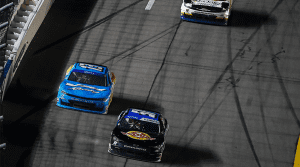 By the time Clements crossed the start/finish line to officially end the race 18 laps past the scheduled 100-lap distance, an additional five caution flags had been displayed.

“I’m speechless man, I don’t even know what to say,” Clements said. “That’s incredible man. I mean, we were as fast as Xfinity internet at the end. It feels so good.”

“I’m sorry, I’m a little speechless. We survived that big wreck back there somehow. It was like a Days of Thunder wreck. I was like, ‘Well, if we can just keep up with these guys, it’ll be a good day. Top five, bring this car home in one piece, and that’s a good day.’ Wow, this is incredible. thank you guys so much for sticking around, I know it’s late as hell, it’s time to drink a beer.”

With the race ending past midnight, the win happened exactly five years after his first victory at Road America in 2017.

“I honestly didn’t have the car to get up there,” Clements admitted. “I had a car to just stay with the pack. I couldn’t really get in there. I had to have somebody push me. Just trying to be aggressively cautious, and it worked for once. I’ve done a lot of these speedway races, and a lot of them haven’t worked out. I guess we finally got one. It’s incredible to win at Day-frickin’-Tona man.”

On the final restart, leader Austin Hill ran out of fuel, allowing Clements and Sage Karam to surge forward on the initial launch.

After a massive push from A.J. Allmendinger, Brandon Brown looked to have good momentum as he sucked up to the back bumper of Clements on the backstretch.

However, when Brown attempted to make a move, Allmendinger ducked underneath both drivers, and took a sniff at the lead out of turn four.

As Clements and Allmendinger had a drag race towards the tri-oval, Riley Herbst got turned, sending the No. 98 aimlessly towards pit road.

With help from Timmy Hill, Clements rocketed back to the front, and never looked back.

The white flag waved, then the caution a few moments later. The race would officially end.

Behind Clements, Timmy Hill would finish second in a career-best effort.

Allmendinger would hang on to finish third, after a tumultuous final laps, which included a spin, and running out of fuel prior to the final restart.

Despite a solid finish, the points leader wasn’t pleased with the style of racing.

“I’m just happy to get out of this place alive,” Allmendinger said. “I absolutely ——- (expletive) hate this racing. So, anytime I can walk away and feel my legs, my arms and be OK, and have a top-five finish, I’m OK any day with that.”

Prior to 10 laps to go, it looked to be a JR Motorsports brigade at the front of the field.

However, with 9 laps to go, the first two dominos would fall. Contact between Allmendinger and Justin Allgaier would result to a wounded No. 7 Chevrolet, and a wrecked No. 1 Chevrolet of Sam Mayer, who got collected in the accident.

Then in the first overtime, leader Noah Gragson would get a massive push from Allmendinger down the backstretch, jolting the No. 9 car loose and violently into the outside wall.

It would be a rough way to end the night for Gragson, who led a race-high 52 laps.

With 10 cautions in the rain-delayed event, it was the most ever for the summer Xfinity Series race at Daytona, surpassing 2017’s total of nine.