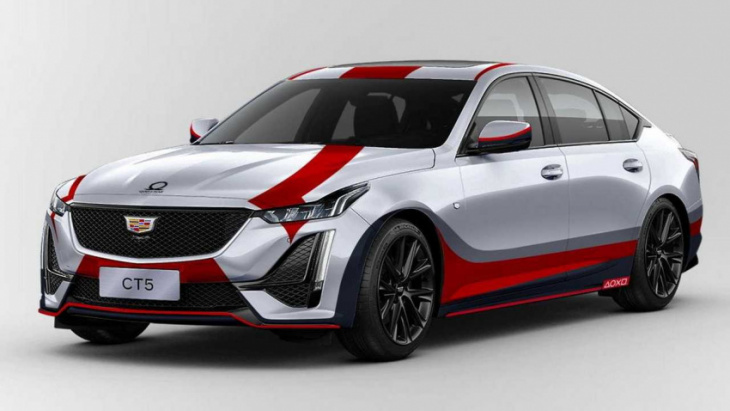 God of War Ragnarök is the latest entry in the long-running action game franchise. Given that the series takes place in ancient mythological worlds, there’s not much connection to cars until now. In China, a special Cadillac CT5 with a paint scheme like God of War protagonist Kratos is now on display in certain cities.

The God of War-themed CT5 wears a silver body with asymmetric red stripes and additional accents in black and gray. The game’s emblem is on the edge of the hood. The triangle, circle, X, and square from the PlayStation controller is just ahead of the rear wheels.

The special CT5 will be on display in Tianjin from November 12 through 15. It’ll be in Shanghai from November 11 through 13, and the car will be in Zhuhai on November 12 and 13. Since these dates overlap, there appear to be at least three examples of this Kratos-themed Cadillac.

The site for the God of War CT5 doesn’t suggest there’s any plan to sell these cars. It seems they are only for display as a promotion for the game. However, there’s a sweepstakes for 120 to win a bundle with a 1:18 scale CT5, a God of War-branded controller, a keychain, and the game’s emblem.

Cadillac is currently working on a refresh for the CT5. Recent spy shots show it under development with an overhauled nose. The grille seems a bit bigger. The headlights have a new shape. The lower fascia has a trapezoidal shape, rather than the current bracket-shaped opening.

The development vehicle in those spy shots doesn’t have any other styling tweaks. We’d expect the brand to make other changes to the final vehicle, though. Inside, the model reportedly adopts a wide bezel with a separate instrument and infotainment display like the upcoming XT4 update.

There’s no indication of powertrain changes for the refreshed CT5. Currently, there are three options: a 2.0-liter turbocharged four-cylinder, 3.0-liter twin-turbo V6, and a 6.2-liter supercharged V8.

Both vehicles are supposedly forbidden fruits for American car buyers.

Should such a thing exist in North America? Every once in a while automakers and entertainment companies will collaborate for a special edition model celebrating some franchise. We can remember when Nissan and Star Wars did such a thing, which to be honest just made us laugh. In China, Cadillac ...

Cadillac’s supercharged Escalade gives you luxuriating comfort with a kick.

Calling all enthusiasts of powerful cars, any idea what the largest mass-produced engine of all time is? You may have never heard of the actual powertrain, but you’re very likely familiar with the car, that being the Cadillac Eldorado. The Eldorado is one of the most popular rides from ...


View more: This Cadillac’s V8 Was Once The Largest Mass-Produced Car Engine On Earth

What caught my eye is the business case built around the car, and how it’s manufactured.

General Motors (GM) introduced two EVs at the China International Import Expo 2022 (CIIE) in Shanghai, which began on November 5th. The automaker introduced the GMC Hummer EV SUV under the umbrella of The Durant Guild, its new business unit that it plans to market its EVs to the ...

The General Motors brand entered the full WEC for the first time in 2022 with a single Corvette C8.R entered in the GTE Pro class for Nick Tandy and Tommy Milner, having previously only raced in the Le Mans 24 Hours and sporadic other races. Recently, Corvette announced that it ...

Cadillac Reaches For The Stars With 2024 Celestiq, A $300K+ Flagship

Ascendiq name trademarked for possible use in Cadillac's electric future

The Cadillac Eldorado Is A Special Car, But Does It Warrant Such A High Price?