It’s almost as if Cadillac’s engineers, in their twilight years of working on combustion engine cars, are going all out and giving car enthusiasts everything they want. Oodles of power? The CT5-V Blackwing is the most powerful Cadillac ever made. A manual gearbox? Absolutely. Trick suspension? Naturally. Sharp looks? Duh.

It also seems as if all of this is to prove other (read foreign) car makers that America can do sharp-handling, sophisticated performance machines. I’m talking your M5s, E63s and RS6s from the Germans most of all. ‘They’ve got the numbers to stand with the world’s best,’ says Cadillac performance variant manager, Mirza Grebovic.

How powerful are we talking here?

How does 668bhp sound? All of that oomph comes from GM’s whopper of a 6.2-litre supercharged V8, which Cadillac has also shoehorned into its gargantuan Escalade V. Regular CT5-V versions feature a fruity twin-turbo V6 instead. Rather different from the Lyriq EV, eh? 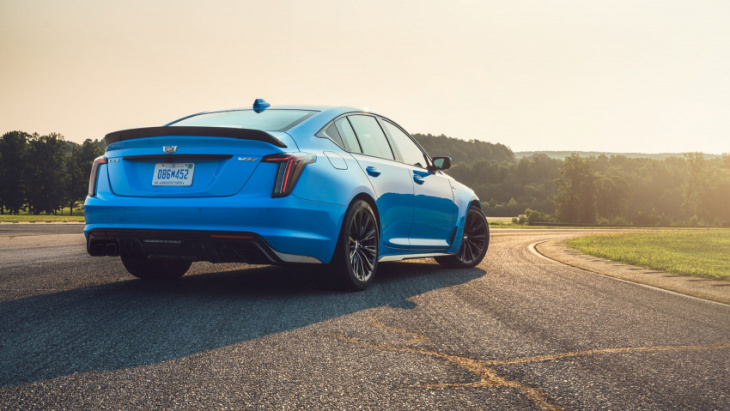 But, for once, it’s not all about power – even if there’s a lot of it. Cadillac has given Blackwing buyers the choice of a six-speed manual as well as a 10-speed auto. Magnetic Ride adaptive dampers are standard, as is an electronic limited-slip differential, a hyper-detailed traction management system that allows you to control just how much you slide and Michelin Pilot Sport 4S tyres. There are even carbon ceramic brakes on the options list.

Cadillac says the manual version can clock in a 3.6-second 0-60mph sprint, with the 10-speed auto ticking just a touch faster at 3.4 seconds. And, as an added bonus with the manual is the ability to flat-shift gears, meaning you don’t have to lift your foot off the throttle when shifting up.

Does it keep up with the Germans inside and out?

Out? Definitely. This thing is imposing to stand near or see in your rear-view mirror, and it’s available in retina-cooking colours like this Electric Blue. 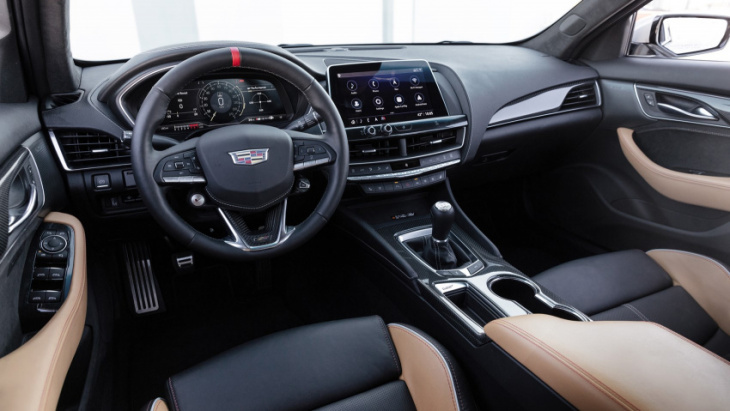 In? Mostly. Bar the odd plasticky bit of trim (something even Mercedes falls foul of with its E63 AMG, by comparison), it’s a restrained kind of sporty. You sit properly low in thickly bolstered sport seats, looking at a wide, glossy set of digital instruments with a chunky manual-shifter by your right hand. If you go digging in the main infotainment screen’s menus, you’ll find a performance logger where you can download the data and upload it to something called the Toolbox by Cosworth (yes, that one), allowing you to learn how to improve your driving skill while on track.

But it’s still remarkably sensible inside; the dashboard layout is neat and, save for the V button on the steering wheel, the Blackwing doesn’t give you too many hints as the power that lies within.

Come on, then – how does it drive?

It starts up in true muscle car form with a phlegmy growl like you’ve just poked a sleeping lion with a big stick, so much so you feel the body judder as the engine wakes up. 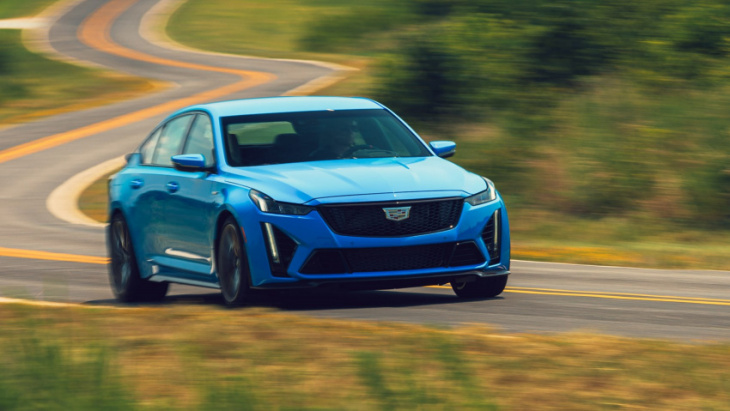 We’ve tested the manual here, and as you roll away some of the attention to detail provided by Cadillac’s engineers is immediately obvious; the clutch pedal is progressive and not too heavy, with each shift giving you just enough notchiness without being obstructive. Good.

Just at a cruise, the Blackwing still does a tremendous job of being a Cadillac. In its softest Tour setting, the adaptive dampers soak up bumps and potholes remarkably well, while the steering has only a gentle swell of resistance as you cruise.

But as you rise up the modes, that monstrous power unit makes itself the forefront of your drive. Press the V-Mode button and all hell breaks loose, with exhaust valves opening up so you can hear every decibel that V8 produces as the dials warp to make the rev counter front and centre. 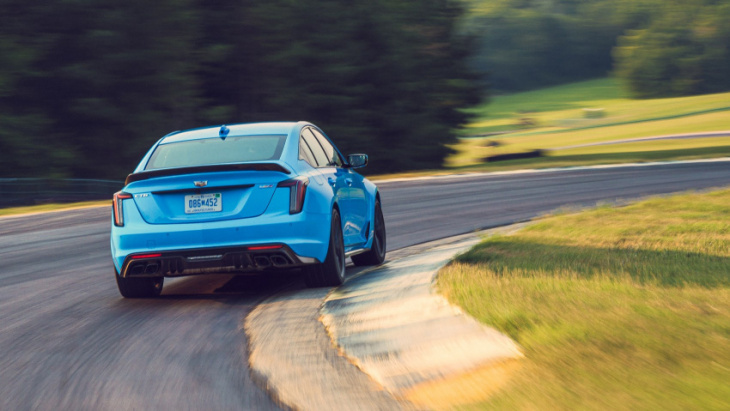 Floor it in a low gear and the Blackwing propels you into the horizon with brute force. It’s properly kick-back-in-your-seat performance, so much so you expect the tarmac to rip up behind you as the rear wheels clamour for persistent traction.

And that’s another thing: the Blackwing is grippy. Normally something pushing almost 700bhp to the rear wheels would be prickly to control if you’re not on runway flat and buttery smooth tarmac, but we hoofed it down some immensely potholed roads and mid-corner and the Blackwing just… goes. Having the ability to flat-shift, too, is a boon for those looking to set some new drag strip times.

You can, of course, egg it on even further if you want to get it sideways, and technology is there to keep you in control; the Blackwing’s traction control system is akin to McLaren’s Variable Drift Control in allowing you to adjust how far the tail will come out before the car puts you back in your place again. Or, you can turn it all off. 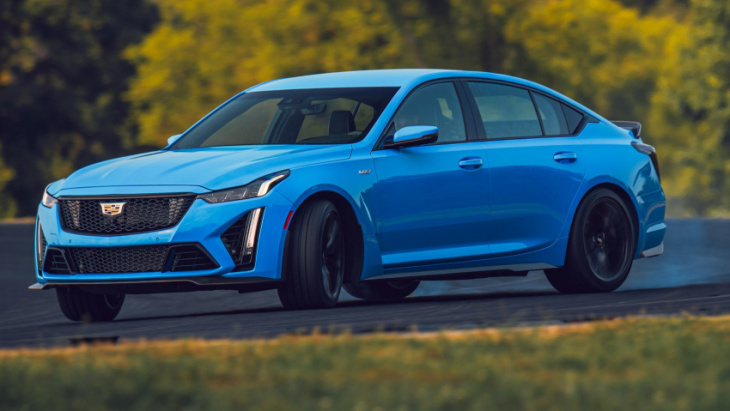 And that lazy-ish steering you feel during Tour mode becomes far sharper and alert to your inputs in the Blackwing’s sportier drive modes. It’s not quite M5 direct, lacking that final degree of urgency you get from just flexing your wrist a few millimetres, but Cadillac has made it damn close.

The CT5-V Blackwing is so much fun. It’s a proper track day hooligan when you want it to be, and a comfortable cruiser to and from that very track day.

Cadillac’s engineers have made something akin to Mercedes-AMG’s E63 – with its baritone V8 and more relaxed driving style when you’re not on maximum attack – rather than the hyper-alert M5. And while we’d like the interior to feel a little more special and yearn for that extra degree of sharpness, the hottest CT5-V is a blast to drive.

Shame we don’t get it here.

My first experience with Super Cruise Is the XT6 a good three-row SUV for a large family? Final thoughts Schools are generally made up of a bunch of cliques — like jocks, nerds, and the all-around popular group. The 2022 Cadillac XT6 feels like one of the main stars ...

Long before Bugatti made 16 cylinders its calling card, Cadillac launched V-16-powered cars in a bid to outdo other luxury automakers. A prime example is this 1930 Cadillac V-16, today part of the Nethercutt Collection, which recently appeared on an episode of “Jay Leno’s Garage.” To keep the V-16 secret, ...

We drove the 2022 Bugatti Chiron Super Sport and found it hyperactivates the hypercar experience. With 16 cylinders, four turbochargers, and the ability to move from 0 to 60 mph in 2.4 seconds, the $4 million Bugatti should be intimidating, and it only is if you think about its ...

Tackling EV Torque Head-On Two Left Feet…Of Flame New Tech Old School High Stop me if you’ve heard this one before: an ultra-heavy truck that somehow manages to scorch the quarter mile in the 12-second range, while also dispatching the 0-60 sprint with a time that would have shamed ...


View more: Test Drive Review: The 2023 Cadillac Escalade-V Is A Horsepower Hammer In The Face Of The EV SUV Invasion

In news to no car shoppers, the average transaction price for new cars reached another record high in August, creeping above $46,000 for the first time, according to J.D. Power. Electric car prices have been especially sensitive to increased demand and constrained supply, with popular models such as the ...

With our 668-hp, six-speed-manual sports sedan, the highs are high, and the lows are low.


View more: Our Long-Term 2022 Cadillac CT5-V Blackwing Is off to an Unforgettable Start