Street takeovers aren’t for real car enthusiasts and are utterly degenerate – this is a pointwe’ve made over and over. And the fools who participate in them prove us right constantly. The latest exhibit to make our case comes via an Instagram video of a C8 Corvette driver absolutely thrashing the mid-engine sports car to get some clout.

While we’ve seen other cars doing donuts at the same time take each other out and muscle cars smack into light poles, this is the first time we’ve witnessed a street takeover moron wreck a car by hitting a curb. We thought that kind of maneuver was reserved for soccer moms in their full-size SUVs as they curb rash each wheel multiple times within months.

Many of the people doing these street takeovers have about zero driving skills, which is why they crash and beat the hell out of the cars constantly. A true enthusiast would care more about their ride than to beat it silly just for some likes on TikTok.

As you’ll see in the video, this guy started his ill-advised and illegal donut from the dead center of the intersection his buddies shut down. Obviously, he isn’t too familiar with how tightly the sports car turns under load, because he didn’t have nearly enough room, sending the back end careening into a curb, bystanders jumping out of the way so they’re not part of the carnage. 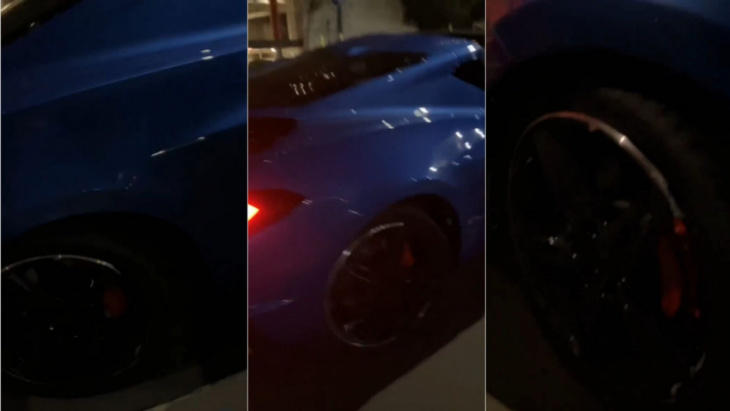 We know, we know, this kind of behavior used to be stereotypically reserved for Mustang drivers, then later the Hellcat and Scat Pack crowd. But lately we’ve been observing more and more C8 Corvettes crashed in the stupidest ways possible. It did start early on after the current gen was released, but these kinds of incidents are becoming far too common.

Don’t worry, though, a lot of times the cars used in street takeovers are stolen or borrowed from daddy, which is why these lovely individuals think it’s hilarious to break them. This will be an expensive fix and we hope the driver is on the hook for the cost since then maybe he’ll swear off such stupid behavior in the future.