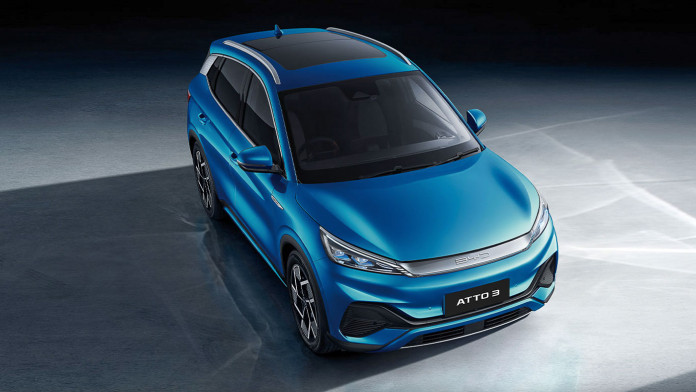 After opening the registration of interest (ROI) for the Atto 3 last month, BYD via Sime Darby Motors Malaysia has announced through its Facebook page that the compact SUV will officially launch in Malaysia on the 9th of December, with a “Grand Launch” event taking place over the entire weekend.

The launch event will take place at Bandar Malaysia, the former Sungai Besi airport and RMAF Kuala Lumpur Air Base, and the company is inviting the public to attend the event, although you’ll want to act fast and register your attendance here, as limited spots are available.

The Atto 3 is one of the two BYD models (alongside the e6 MPV) already earmarked for Malaysia. Specific variant details for our country have not yet been provided, but the compact EV SUV is offered with a choice of two battery capacities globally, including Thailand where it was launched just earlier this month.

The line-up kicks off with a 49.92 kWh Standard Range variant, offering up to 345 km of range (WLTP test cycle), while the Extended Range variant promises up to 420 km of emission-free driving thanks to its 60.48 kWh Blade EV battery pack.

No matter which battery size, however, the electric motor will be the same across the board. A single electric motor mounted on the front axle is capable of providing the BYD Atto 3 up to 150 kW (204 hp) and 310 Nm of torque.

As for charging, the entry-level model will support up to 70 kW of DC fast charging, while the Extended Range gets 80 kW, the latter allowing for a 0-80% charge in approximately 45 minutes. Both variants also feature an on-board AC Charger capable of receiving up to 7 kW of power via the Type 2 connector.

Final pricing will also only be revealed at launch, although it’s widely rumoured to retail between RM150k to RM170k, putting it right alongside the upcoming Ora Good Cat at the more affordable end of the EV spectrum. The Ora Good Cat is expected to cost around RM150k, and has been reported to have received over 100 bookings before its official launch.

Currently, the most affordable EV in Malaysia is the Hyundai Kona Electric, which is priced between RM 157k and RM208k.

PETALING JAYA: It was just over two months ago that Sime Darby Motors (SDM) Malaysia had signed a distribution agreement with China’s electric car maker BYD. Today sees the launch of the Atto 3 SUV, the first BYD model in Malaysia. It will be followed by the e6 MPV. ...

At the launch of the BYD Atto 3 today, BYD Malaysia (Sime Darby Beyond Auto) took the opportunity to tease the BYD Dolphin and the BYD Seal. The BYD Dolphin is an EV hatchback while the BYD is an EV fastback sedan. Hinting at possible debuts in the future, ...

At the launch of the Atto 3 fully-electric crossover today, BYD Malaysia, represented by Sime Darby Beyond Auto, announced that it will be establishing a wide network of showrooms around the nation to serve “the country’s growing appetite for EVs”. The company will open the doors to its first ...

The BYD Seal is one of the most complete EVs to come out of China this year, but does it have what it takes to beat the Tesla Model 3?


View more: BYD Seal First Reviews Anticipate It Will Be A Huge Hit In Europe