BYD isn’t currently a household name in the UK – but that could be about to change if the brand’s attack on the European market goes to plan. The Chinese EV manufacturer launched into the Dutch, Norwegian, Swedish, Danish and Belgian markets in August 2022 and has plans to advance on the rest of Europe before the end of the year.

The UK is next on the list. Company executives have assured us you’ll see BYD cars on British roads by December – and the new Atto 3 will lead the charge. It was designed to compete in the thriving family SUV class and soon will rival everything from the Volkswagen ID.4 to the Renault Megane E-Tech Electric and the latest Kia Niro EV. 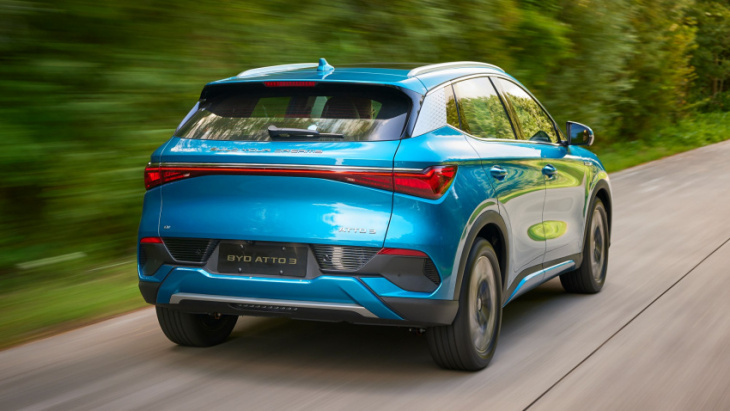 We reckon the Atto 3 is one to watch out for, especially when you consider the brand’s aggressive sales strategy. Because BYD has complete control over its supply chain, (it makes its own batteries, motors and semi-conductors), it says it’ll be able to deliver where established European manufacturers can’t.

Wait times for electric cars from BMW, Kia and Volkswagen can stretch to several months, but you’ll soon be able to walk into one of BYD’s UK showrooms and get your hands on an Atto 3 in a matter of weeks – and that might just give the firm an edge. We’ve driven an early version of the car ahead of its UK launch to get a taste of what’s to come.

Early impressions are good. However, we’ll have to spend some more time behind the wheel before we can make our final verdict, mainly because our test drive took place on the access roads of an airfield in the country-sized billiard table that is the Netherlands. As such, we won’t give the Atto 3 a star rating until we’ve driven it on UK roads.

The BYD Atto 3 is built on the brand’s third-generation electric platform and powered by a 60kWh version of its puncture-resistant Blade battery. Executives tell us the EV can cover 261 miles before needing recharged, which is around 20 miles less than the Renault Megane E-Tech electric and Kia Niro EV. It should still be enough for most owners’ needs, though. 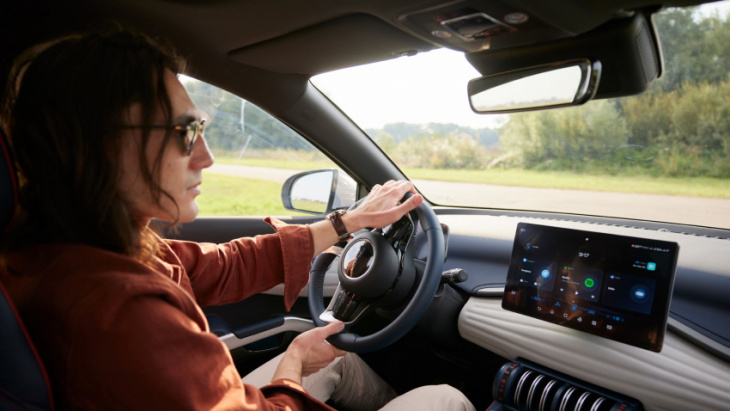 Charge times are average. The Atto 3 supports DC rapid charging, but only at speeds up to 88kW – and that means a 30–80% top-up takes 29 minutes. The flagship Volkswagen ID.4 can accept 125kW of power, allowing it to it charge from 10–80% capacity in the same time.

The battery is paired with a 201bhp electric motor mounted on the front axle. It’s a smooth unit and offers more than enough performance for the car’s needs. With a 0–62mph of 7.3 seconds, it’s also noticeably quicker than the equivalent Skoda Enyaq and Kia Niro EV.

The handling shows promise, too. On the route, there were a couple of tight chicanes which the Atto 3 tackled admirably. Like most EVs, its battery is mounted on the underside of the chassis which gives it a low centre of gravity. 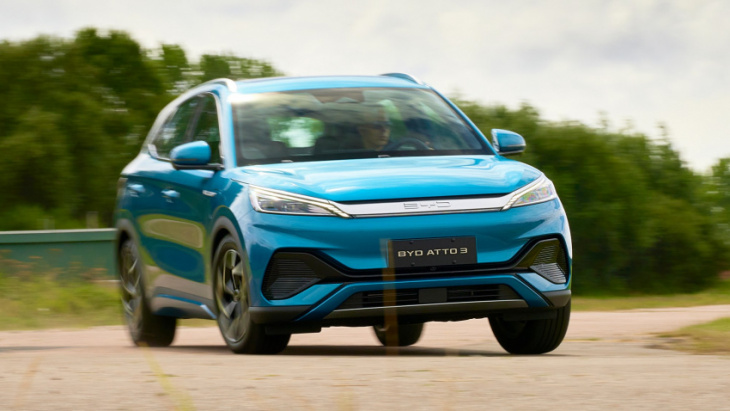 BYD has set the Atto 3’s suspension quite soft, which means there’s a bit of body roll when you tip it hard into a corner – even at low speeds. But that isn’t such a bad thing given the car was designed for family duties. Comfort should be priority here over handling here.

Unfortunately, our test route was quite smooth which meant we couldn’t learn much about the Atto 3’s ride and refinement. However, there was one nasty joint between two different sorts of tarmac on the track and, while that sent a shudder through the cabin, it didn’t feel any worse than its European and Korean competitors.

The brakes deserve a special mention. The Atto 3’s transition from regenerative braking to friction braking is uncannily smooth – and the pedal feels great. The steering is a quite dead, but that’s a trait shared with most of the cars in this class.

Better than we were expecting. The only other Chinese car company we’ve interacted with is MG – and the quality of its cars can be rather hit and miss. We’ve experienced rattly trims and faulty infotainment systems on cars that haven’t even covered 1,000 miles.

Early impressions suggest that BYD has taken a different route. Common touch points like the centre console, steering wheel and door pulls have been trimmed in the same sort of soft-touch materials you’d find in a Volkswagen or Hyundai EV – and, more importantly, the cabin panels have been pieced together properly. It’s a very nice place to be. 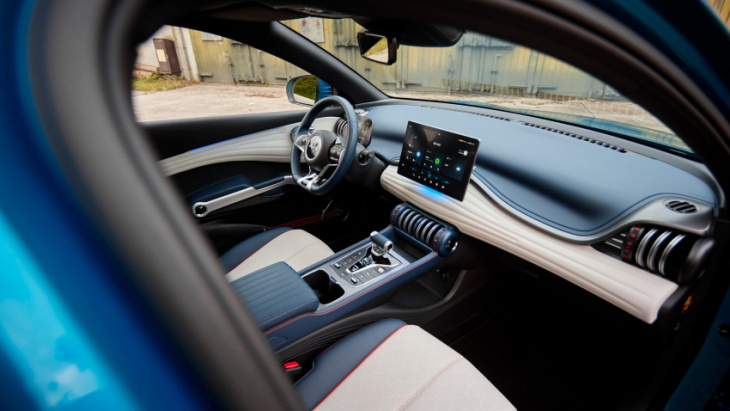 The main quality issue we noticed was the air conditioning fan. It was a hot day, so the fan was on full whack – and it sounded like someone in the dashboard was feeding a breeze block into a Kenwood mixer. We’ll put that down to it being an early build car, though.

BYD’s landscape 12.8-inch infotainment system is as sharp as any of its European rivals’, and it has a clever party trick. Push a button on the steering wheel and it rotates 90 degrees to become a portrait infotainment system. It’s a very entertaining piece of kit. 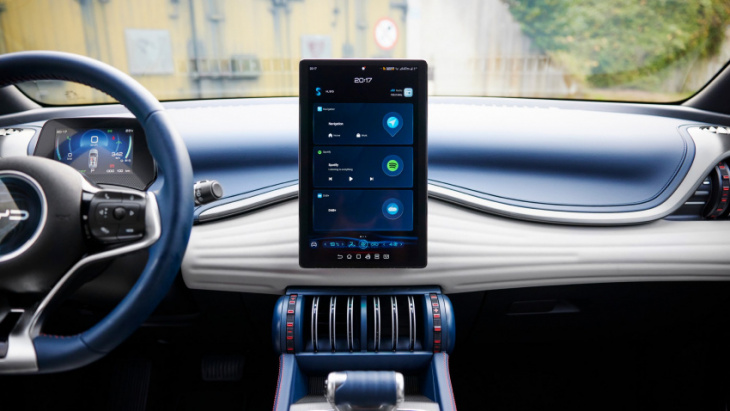 BYD’s thinking is that it’s better use the landscape screen for media functions and easier to use the portrait screen to read sat-nav instructions, as it allows you to see more of the road ahead. But we’ve had lots of experience with Volvo’s portrait touchscreens and we’re not sure it makes that much of a difference.

Space up front is good, but headroom in the back is a bit tight because of the standard-fit panoramic sunroof. The runners for the glass rob a couple of inches from those in the outer two seats. Legroom is good, though – there’s no central tunnel to trip over and there’s lots of kneeroom, even with a tall driver ahead. 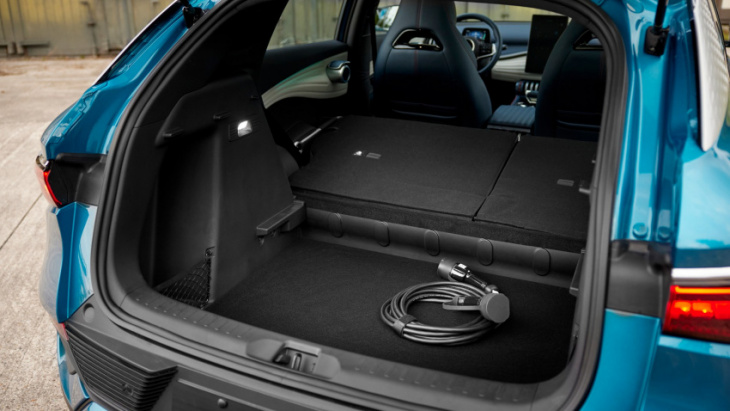 The boot’s a decent size, too. You get 440 litres with the bench in place and 1,338 litres if you fold the rear seats flat. That means the Atto 3 has slightly less storage space than the Kia Niro EV, but the room you give away in the boot is handed to rear seat passengers.

How much will it cost?

Despite our relentless pestering, BYD hasn’t told us that yet. To be competitive in the market, the company will need to target a starting price of between £35,000–£40,000. It’s likely that BYD will aim towards the upper end of that scale, justifying its actions by offering the Atto 3 with one highly specified trim-level and a single powertrain.

The company pulled the same trick when it launched its seven-seat Tang SUV in the Nordic countries earlier this year. BYD tells us that buyers there didn’t seem to mind paying extra, as they could see added value in the car. We’re due to receive a detailed UK specification for the Atto 3 in October at the Paris Motor Show. 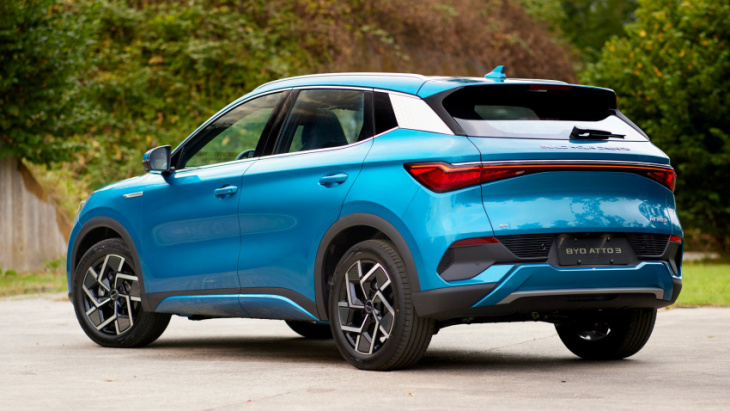