Back when full-sized American cars roamed the continent, the Chevrolet Impala was the T-Rex of the leaded-gas era, dominating the market with more than one million units sold in 1965 alone.

It’s a record that still stands today. Surprisingly, an American-branded sedan hasn’t ruled the sales charts since the Ford Taurus relinquished its best-selling crown to the Toyota Camry in 1997.

The Camry has been America’s sweetheart ever since – except in 2001 when the Honda Accord topped the chart for one year. (By comparison, Honda’s Civic has been Canada’s favourite car for the past 24 years.)

Starting with its first boxy, front-wheel-drive Camry in 1982, Toyota proved it could build models for North American tastes, and even have fun with the language: Camry is an anagram of “my car.”

The eighth generation of Toyota’s midsize family sedan rolled out of its Georgetown, Kentucky, plant in June 2017. Unlike the unambitious styling that graced earlier Camrys, the 2018 four-door looked longer, lower and wider, giving it a sleeker profile unlike any Camry that preceded it. 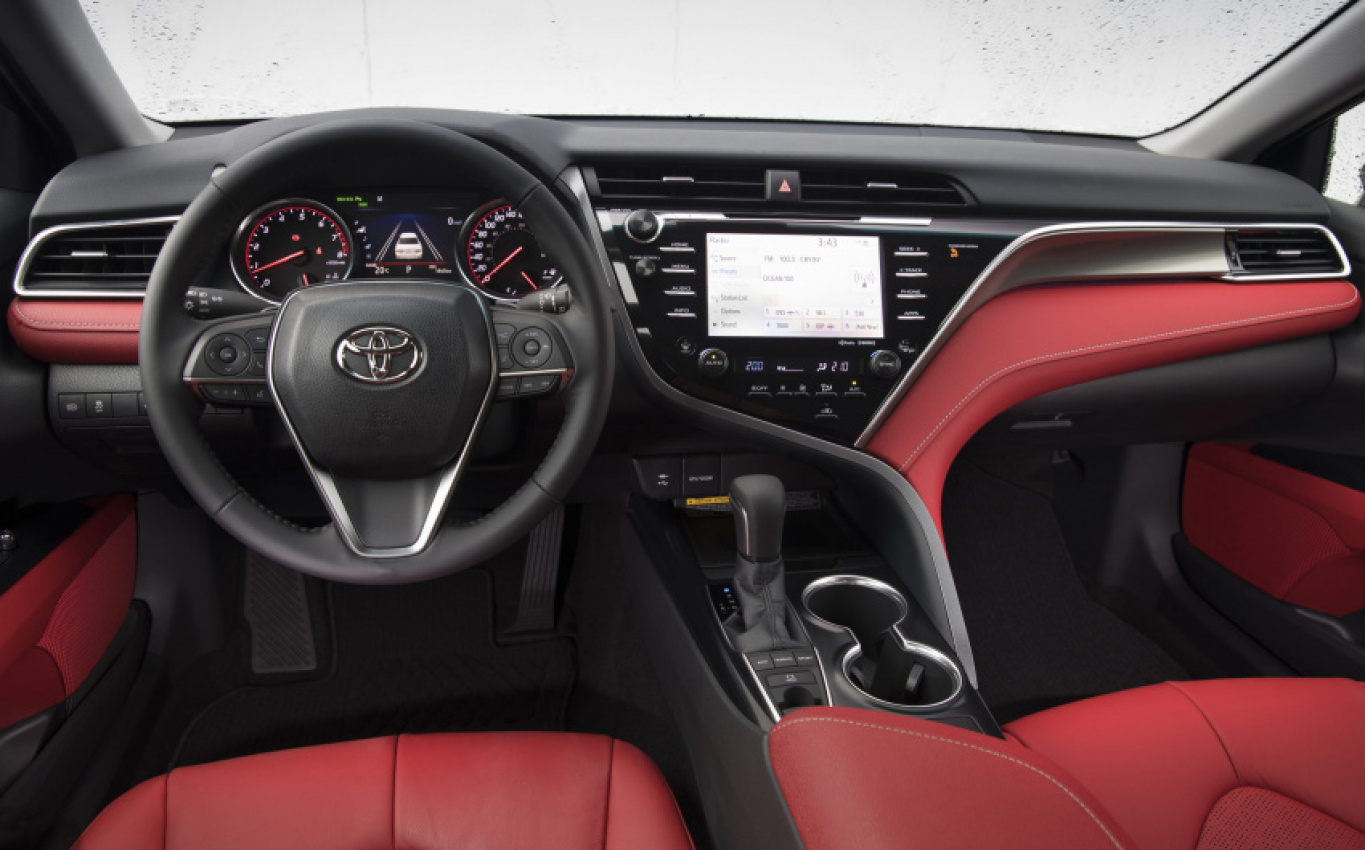 Thank company boss Akio Toyoda for his newfound interest in building unboring cars. In the Camry, that meant replacing the previous rear-strut suspension with a double-wishbone setup that, combined with the rigid TNGA platform, was key to making the Camry a better driver’s car. The five-centimetre-longer wheelbase also provided generous rear-seat legroom and knee clearance.

The cabin’s asymmetrical dashboard features a wavelike element and triangular centre stack that angles toward the driver, while the dash curves away from the passenger to create a sense of spaciousness. Higher trims get soft-touch plastics and attractive graining, and designers finally added some colour to the interior palette instead of sticking with industrial black.

Toyota’s Entune 3.0 infotainment system features a standard app-based navigation system, which works through a connected Apple or Android phone with the Scout app to provide turn-by-turn directions just like a factory nav system. The downside is Entune didn’t support Apple CarPlay or Android Auto at the outset. And customers found it buggy

“Their Entune system is almost pre-historic,” wrote one unhappy Camry owner in a post. “It disengages while driving and when it’s parked. I am constantly reloading the apps on my phone and then have to reload the apps to the system. It takes 20-25 minutes each time.”

Powering the Camry are two new, but familiar, engines. The 2.5-litre four-cylinder has a longer stroke and a higher compression ratio than before, and it boasts direct-and-port-injected fuel delivery to combat carbon deposits. There’s 203 horsepower and 184 lb-ft of torque on tap, or 206/186 with quad exhaust. A 176 hp version of the same engine pairs with a synchronous AC electric motor/generator, rated at 118 hp and 149 lb-ft of torque, in the Camry Hybrid for a combined output of 208 hp.

Optional is an all-new 3.5-litre V6, this time making 301 horsepower and 267 lb-ft of torque. Both engines work with a new eight-speed conventional automatic transmission, while the hybrid makes do with a sophisticated continuously variable (CVT) automatic.

Toyota upped its safety content with standard forward-collision warning with pedestrian detection and automated braking, adaptive cruise control, lane-departure warning with steering assist and no less than 10 airbags. Blind-spot monitoring and rear cross-traffic alert with automatic braking is available. The Camry passes the requisite crash testing with five stars across the board. 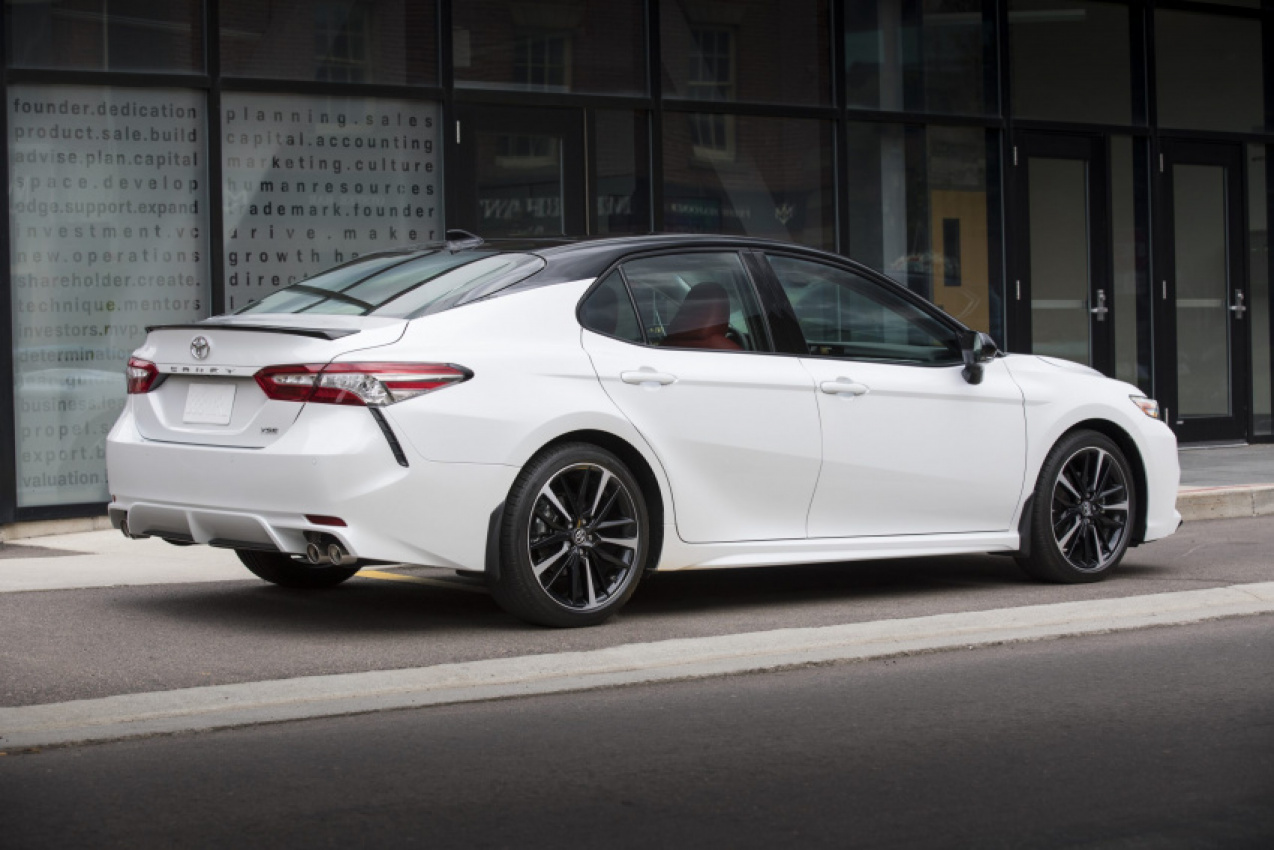 In terms of updates in subsequent model years, Apple CarPlay was added to Entune in 2019, while Android Auto came on board in 2020 models. Also added that year was optional all-wheel drive, but solely with the four-cylinder engine. Also new was a performance-oriented V6 outfitted by Toyota Racing Development (TRD), complete with retuned dampers supported by stiffer springs that lower the ride height, along with beefier anti-roll bars, chassis bracing, a TRD-specific exhaust system and lightweight wheels. An aerodynamic body kit and cabin dressed in racy red complete the look.

For 2021 the Camry received revised styling up front, along with new paint colours and alloy wheels. Inside, there’s new touchscreens that measure either seven or nine inches, as well as enhanced driver assists, including technology that better recognizes pedestrians and cyclists.

The latest generation Camry actually is a nice driving automobile. Its four-cylinder engine is the most powerful naturally aspirated four in the segment, and its additional output is evident. Zero to 97 km/h comes up in 7.3 seconds – decent performance for a mid-sizer saddled with a four banger. The hybrid model is no less energetic.

The Camry’s V6 – now a rarity in the thinning family sedan segment – beats many competitors’ turbocharged fours. Highway velocity comes up in 5.8 seconds and the acceleration is not marred by torque steer. The velvety eight-speed automatic transmission kicks down willingly most of the time. The drivetrain is so smooth and unruffled that it’s easy to see why the same hardware underpins the Lexus ES sedan.

The TNGA chassis is remarkably solid and resists body roll admirably, providing a newfound poise that was missing in action in previous Camrys. There’s not a hint of harshness in the ride; bumps in the road surface, whether large or small, are damped well overall. The electric steering provides weight that builds nicely as you turn the wheel. Unfortunately, the Camry isn’t a serenely quiet car – the engine is buzzy under acceleration and there’s noticeable wind and road noise on the highway.

One of the primary reasons the Camry sells so well is that this unassuming sedan helped establish Toyota’s reputation for reliability over the past four decades. It’s no wonder that so many of them rack up half a million kilometres or more working as taxicabs. The latest iteration promises more of the same bulletproof reliability, although there are a few reoccurring issues used-car buyers should be aware of.

“Transmission shifts absolutely terrible (and) hunts for gears constantly. The vehicle hesitates for more than a couple seconds sometimes when merging on the freeway, making it dangerous,” one owner posted online, sharing an observation about the eight-speed automatic others have noted, too.

That hesitation experienced in some 2018-2019 four-cylinder Camrys, typically while accelerating from a slow roll or rolling stop, may be traced to the Engine Control Module logic that can be modified to reduce the potential for hesitation as described in technical service bulletin T-SB-0152-19.

In an important recall involving the brake vacuum pump, 2018-2019 Camrys could lose power braking if certain pump components prematurely wear out (although unassisted braking will still be functional). A cap inside the pump can become stuck between the vane and the pump housing, potentially preventing the vacuum pump from supplying vacuum to the brake booster.

In another recall involving 2018-2020 Camrys, fuel pumps are being replaced because their impellers may crack and absorb fuel. This can deform the impeller and cause the engine to stall. The automaker had received more than 2,500 fuel pump warranty claims.

In addition, a few owners have noted their power steering started working intermittently while driving. Repairs may require replacing the gear assembly and the electric motor and steering shaft assembly – an expensive fix post-warranty.

Owners of 2020-2021 models have experienced a rash of prematurely dead batteries. T-SB-0095-20 prescribes a DCM reset and firmware update to address a recent software update that may have drained the battery with numerous incomplete ignition starts.

If that’s a lot of problems for a much-hyped dependable Toyota, know that the Camry sells in the hundreds of thousands every year, so any issues are well documented online. The reality is this newest generation Camry took some risks that made for a thoroughly more engaging car. If you’re looking for a more reliable example, the Camry Hybrid comes highly recommended.

The vehicle was provided to the writer by the automaker. Content and vehicle evaluations were not subject to approval.

Sized similarly to the Toyota Corolla and Tesla Model 3, the bZ3 is powered by BYD's Blade LFP battery technology.

Season 5 of the Toyota GR Festival Vios Challenge drew to a close last weekend, in the most dramatic fashion possible – the overall championship title in all four classes would be decided in the very final 20 laps of their respective races at the Sepang International Circuit. While ...

** This article is published on WapCar Community, representing the opinion of users. Click the link below to enter the community for car enthusiasts in Malaysiahttps://forum.wapcar.my/ Basic information of my car: PRIUS 1.8 LUXURY ZVW30 Reasons why I bought this car Before i bought my prius i was driving a ...

Launched in January this year, the Toyota Corolla Cross Hybrid is an interesting proposition if you’re shopping for an SUV. Sure, the Corolla Cross Hybrid’s interior may be a little bit dull compared to its peers, but its hybrid powertrain does help you to save on fuel. It is ...


View more: Video: How does the Toyota Corolla Cross Hybrid save you fuel?

2023 Toyota Camry vs. 2023 Honda Accord: Which Midsize Sedan Is More Fuel Efficient?

How Much Does a Fully Loaded 2023 Toyota Camry Cost?

Thailand sales of Toyota Camry and Honda Accord dominated by hybrids

Is the 2018 Toyota Camry a Used Midsize Sedan Worth Buying?