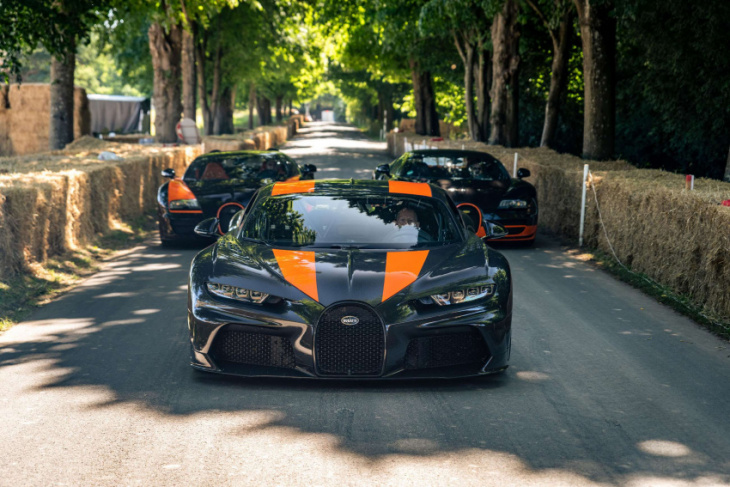 Since the Veyron arrived on the scene in 2005, Bugatti has stood atop the motoring world as a company that creates some of the fastest and most exquisite cars in the world. The Veyron was a work of magic, with 1,000PS (735kW) from an 8.0-litre, quad-turbocharged W16 engine which, combined with all-wheel-drive and a seven-speed double-clutch gearbox, could send it to 62mph in 2.5 seconds and on to a top speed of 253mph. But Bugatti was never going to stop there – the company’s engineers realised there was more performance to be had, the result of which was the Bugatti Veyron Super Sport.

In 2010 the Bugatti Veyron Super Sport hit 268mph, 15mph beyond the top speed achievable in the standard Veyron and a new record for road-going production cars. The bodywork was modified for maximum aerodynamic efficiency and greater high-speed stability, the turbochargers were larger, there were bigger intercoolers, the suspension, dampers, wheels and more were all tweaked to cope with the sheer straight-line performance. As for power, this ultimate Veyron had 1,200PS (883kW) and 1,500Nm (1,110lb ft) of torque, 200PS and 250Nm more than before. 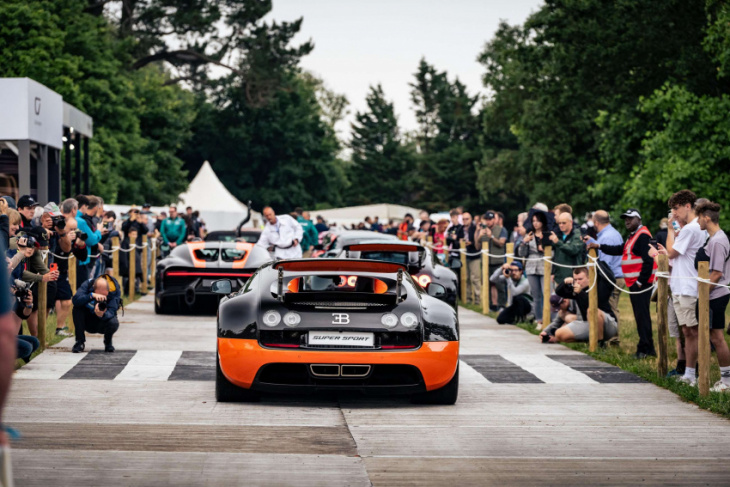 Bugatti made 48 Veyron Super Sports, the first five of which were known as ‘World Record Edition’ cars. This is one of those vehicles, complete with its naked carbon-fibre bodywork and unique painted orange accents. And the man behind the wheel at the 2022 Festival of Speed presented by Mastercard? Pierre-Henri Raphanel, the very man who drove the car to 268mph at the company’s test track, Ehra-Lessien in Germany.

Three years later Bugatti was at it again, this time pushing the open-top Veyron Grand Sport to the extreme with the Grand Sport Vitesse. It was, essentially, a roofless Veyron Super Sport, with the same upgraded engine and so on. But Bugatti had to put a great deal of effort into making sure that, with the roof off, the car would remain stable at more than the Grand Sport’s top speed of 229mph. In the end the company managed 254mph in the Grand Sport Vitesse – that’s 254mph without a roof, setting a record in the process, Anthony Liu the man who claimed the honours. 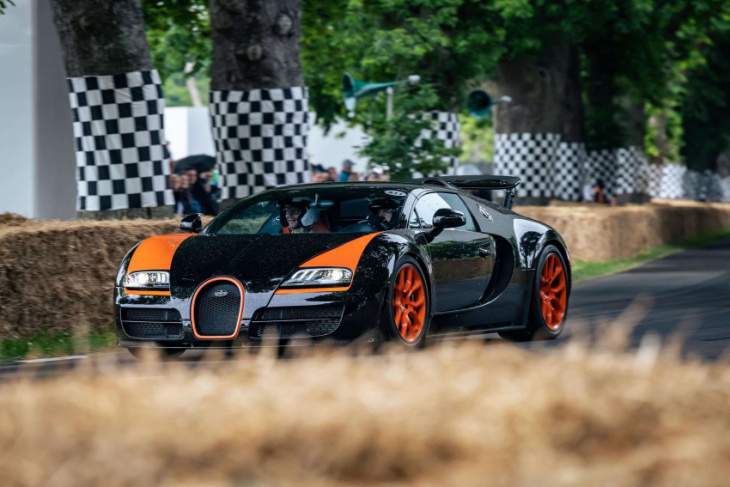 The car at Goodwood is one of only eight ‘World Record Edition’ examples, finished with gloss carbon and orange paintwork once more, with Bugatti building 92 of the most extreme convertibles the world had ever seen.

The Veyron lived a long life, with a production run that spanned 10 years, and in 2016 it was succeeded by the Bugatti Chiron, a car with a heavily revised version of the 8.0-litre W16 from the Veyron and designed to go a step beyond that car in every respect. It had 1,500PS (1,103kW) and 1,600Nm (1,184lb ft), could hit 62mph in 2.4 seconds and career across the surface of the earth at a truly ridiculous 261mph. But, as with the Veyron, Bugatti knew there was more performance to be had, and in 2019 unveiled the Chiron Super Sport 300+. 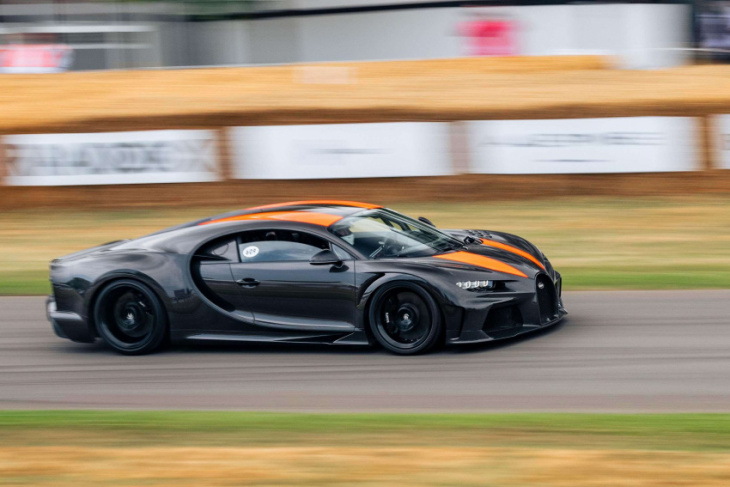 The first series production car to hit 300mph (304.773mph if we’re being precise), the Super Sport 300 had a power bump to 1,600PS (1,177kW), and was treated to a 25mm longer tail to reduce aerodynamic stall plus a new exhaust and rear diffuser to create negative lift and reduce drag. Only 30 cars will be built and, not one to break tradition, Bugatti stuck to a carbon-fibre and orange accent finish. It’s Bugatti test driver and 1988 Le Mans winner Andy Wallace in the driver’s seat at the 2022 Festival, a seat he’s very familiar with having set that astounding 300mph-plus record.

There will never be a convertible Chiron, so until the Chiron is replaced, whatever form that might take, these are the three record breakers, a trio of very special cars that pushed road car performance into another dimension.

Leave the other 99-percent in the dust with this hyper car. The Bugatti Chiron is a more than worthy successor of the dominating Bugatti Veyron. This car is a tried and true performance monster, and with the added ‘Sport’ trim, it’s even more exceptional with the widespread use of carbon ...

After Bugatti ceases production of the Chiron in the coming year, the automaker will switch to building the Mistral, a roadster sharing its underpinnings with the Chiron, and confirmed to be the last Bugatti with the mighty W-16 engine. Bugatti has designed the Mistral to go faster than 261 ...

Introduced in 1931, the Bugatti Type 51 was the latest iteration of the company’s time-honored two-seat race car design that originated with the Type 35. Utilizing the engine architecture Ettore Bugatti licensed from Harry Miller’s successful Indianapolis race cars, the Type 51 featured a dual-overhead cam version of the supercharged ...

Bugatti is close to completing the last of its Chirons, after which the company will start building the Mistral, a roadster sharing its platform with the Chiron and destined to be Bugatti’s last car powered by the quad-turbo 8.0-liter W-16 that first appeared in the Veyron almost two decades ...

Why does one buy a Bugatti? Sure, the speed is definitely a factor – you don’t build a car like the Veyron or Chiron without piquing the interest of cashed-up speed demons. The luxury? Absolutely. To feel special? No question. To advertise immense wealth? Yeah, that probably has a part ...