The Chiron-based roadster stars in new images and a video. 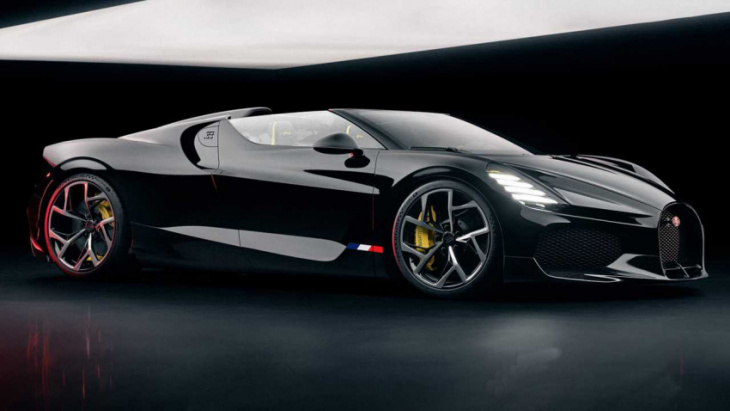 Bugatti has been awfully quiet about the ultra-exclusive Mistral since it unveiled the spectacular roadster in August at The Quail during Monterey Car Week. Thankfully, the Chiron-based droptop is making the headlines again as the folks from Molsheim have been kind enough to share new details about the last of the W16 breed. Much like other quad-turbo 8.0-liter monsters before it, the hypercar with unlimited headroom has a dedicated top speed mode.

While the Veyron 16.4 Grand Sport Vitesse hit 254.04 mph (408.84 km/h) in 2013, Bugatti is confident the Mistral will easily top that. Emilio Scervo, Bugatti Rimac Chief Technology Officer, says the new roadster has been engineered to reach an impressive velocity of at least 261 mph (420 km/h). With top speed mode active, the rear wing will automatically adjust to the minimum amount of rake to reduce drag and make the open-top Chiron as slippery as possible.

The Mistral takes design cues not just from the Chiron upon which it’s based, but other special derivatives such as the Centodieci, Divo, and the one-off La Voiture Noire. In addition, the Bolide’s X-shaped taillights have a correspondent on the new roadster to make the derrière probably the most spectacular angle of the 1,577-horsepower roadster.

The last W16 road-going car Bugatti will ever make, the Mistral is limited to only 99 units. All of them have already been spoken for despite an eye-watering price tag of €5 million net. Deliveries to customers are scheduled to commence in 2024 when the French automaker will also begin to ship the Bolide track-only vehicles to their rightful owners. The extreme Chiron flavor is capped at 40 examples and is relatively cheaper, at “only” €4 million a pop.

Unique doesn’t even begin to describe this beautiful car. Have you ever been asked, “What color is your Bugatti?” Well, if you like this car, the answer to that question might just be Silver. That’s because recently it’s 1994 Bugatti has come onto the market and stun fans of both ...

Leave the other 99-percent in the dust with this hyper car. The Bugatti Chiron is a more than worthy successor of the dominating Bugatti Veyron. This car is a tried and true performance monster, and with the added ‘Sport’ trim, it’s even more exceptional with the widespread use of carbon ...

After Bugatti ceases production of the Chiron in the coming year, the automaker will switch to building the Mistral, a roadster sharing its underpinnings with the Chiron, and confirmed to be the last Bugatti with the mighty W-16 engine. Bugatti has designed the Mistral to go faster than 261 ...

Introduced in 1931, the Bugatti Type 51 was the latest iteration of the company’s time-honored two-seat race car design that originated with the Type 35. Utilizing the engine architecture Ettore Bugatti licensed from Harry Miller’s successful Indianapolis race cars, the Type 51 featured a dual-overhead cam version of the supercharged ...

Bugatti is close to completing the last of its Chirons, after which the company will start building the Mistral, a roadster sharing its platform with the Chiron and destined to be Bugatti’s last car powered by the quad-turbo 8.0-liter W-16 that first appeared in the Veyron almost two decades ...