This is most likely the very first Centodieci delivered to a customer. 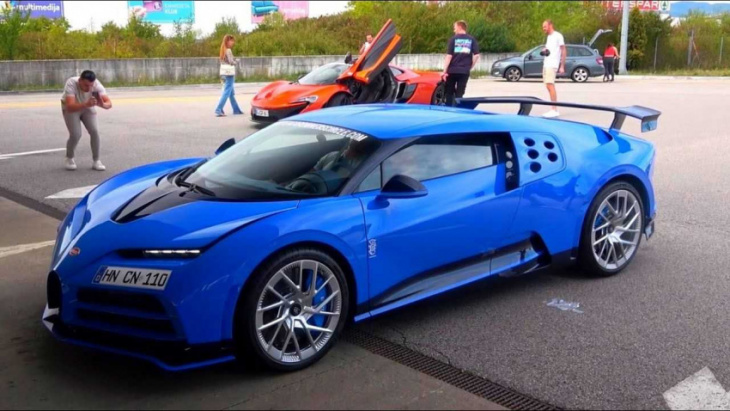 The first of a total of ten Bugatti Centodieci supercars was delivered to its new owner earlier this year. Following a lengthy and complicated process of testing, preparations, and assembly, one of the most expensive and most powerful products from the automotive industry is now on the roads around Europe. And we mean this literally – this particular car was recently caught on camera in the traffic.

Youtuber 912fordgt was in the right place at just the right time to film the first customer Centodieci. The video description doesn’t include information regarding the location where the supercar was shot but we made a little investigation and concluded the video is from Croatia. As far as we are aware, just recently the Supercar Owners Club had a gathering in Zagreb and Bugatti was probably participating in the event.

The Centodieci was released as an homage to the Bugatti EB110 and the first example delivered to a customer was finished in the same blue color the EB110 had. This is a very traditional color combo for the French company and the owner of the Centodieci also has an EB110 GT finished in the same hues. The automaker has plans to assemble just 10 examples of the Centodieci and all have already been spoken for. The Chiron-based supercar costs at least $8.8 million.

Speaking of the Chiron, the Centodieci is not simply a rebodied version of the model from Molsheim. It is around 44 pounds (20 kilograms) lighter, has a different suspension, and a more aggressive and efficient aerodynamic package. Under the sleek skin is Bugatti’s 8.0-liter W16 engine with a peak output of 1,600 horsepower (1,176 kilowatts). The 0-62 miles per hour (0-100 kilometers per hour) acceleration takes just 2.4 seconds.

We are very happy to see such a rare and exotic supercar actually being driven. We know the owner of the first Centodieci won’t take it to the track very often, but at least they are not the type of collector that only keeps their precious car inside a garage.

Bugatti has been toying with the idea of a second, more practical model line for more than a decade, with the company even previewing a potential sedan in 2009 with the Galibier 16C concept. Under the reign of former chief Stephan Winkelmann, Bugatti’s focus was centered on an SUV-like ...

Both drive away with wins.

This drag strip duel is an epic battle between the past and the future.


View more: Of Course The Bugatti Chiron Wants A Piece Of The Tesla Model S Plaid

It's a customer car that pays homage to the EB110 Supersport of the early '90s.


View more: Bugatti EV And SUV Won’t Happen In The Next 10 Years

What is Bugatti planning to unveil at The Quail?

Bugatti configurator guide: how to spec your Chiron

Bugatti has a new car planned for 2022 Monterey Car Week

House of Ettore: The Bugatti Château Is Where the Brand's Past Meets Its Present

Bugatti Tries Its Hand At An Electric Two-Wheeler, And It's Under $1,500