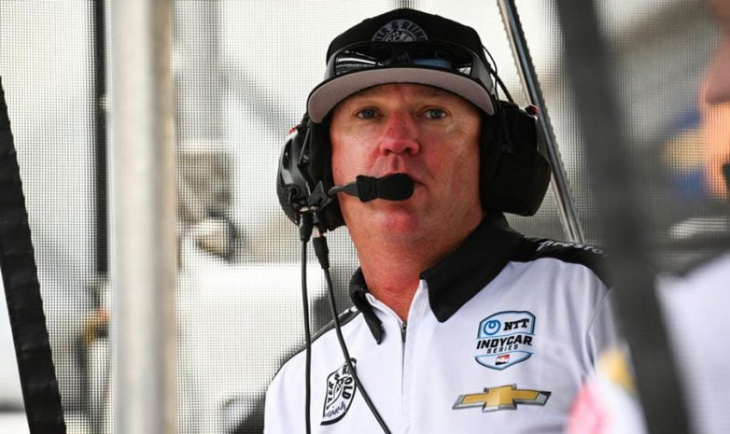 Buddy Rice was a tiger behind the wheel of a race car. He would quietly prowl in the background until it was time to pounce.

“He was Mr. Cool,” team owner Bobby Rahal told SPEED SPORT. “Ice water in his veins. Nothing got him too excited. When it was time to go, he flipped a switch and off he went. That was fun to watch. Fun to be a part of. He was a great driver for us. Someone we loved and had a lot of respect for and glad we could share that victory together.”

That victory came in the 2004 Indianapolis 500 during a bizarre day in which severe weather was barreling down on the legendary 2.5-mile track. The pending storm only added to the drama as teams up and down pit lane stretched fuel mileage in case the race was stopped short of its distance.

With rain about to fall, Rice was in the lead and one of his co-owners at what was then known as Rahal Letterman Racing was in disbelief at what was about to happen.

“The unbelievable job that Buddy has done all day, it’s a heroic effort,” famed comedian and TV talk show host David Letterman said at the time. “The car was strong under any circumstances. The car fell back a couple of times and he kept tigering forward and forward.

“It’s unbelievable. He has done a tremendous job.”

The yellow flag came out on lap 174. When the yellow and white flags were displayed at the start of lap 180, the race was official as nearly 300,000 fans scrambled for cover.

Rice became the 18th driver to get his first Indy car victory in the Indianapolis 500. It was also Rahal Letterman Racing’s first victory since leaving CART at the end of the 2003 season to join the Indy Racing League.

His first season in IRL, Rahal had an impressive team that featured Honda power in a G Force chassis with Rice and Vitor Meira as the team’s full-time drivers. The late Scott Roembke ran the operation and was a wizard when it came to race strategy. Todd Boland was Rice’s engineer and enjoyed a magical month of May at Indianapolis.

Rice was among the fastest drivers all month, won the pole and led 91 laps during the 180-lap, rain-shortened Indianapolis 500.

As a team, Rahal Letterman Lanigan Racing finished first with Rice, fourth with Meira and 10th with Roger Yasukawa.

“In the race, Buddy was up front the whole race. Tony Kanaan was running up front, Dan Wheldon. Bruno Junqueira led his laps when everybody pitted, and he was going further.

“What really made it a crazy race was it started sprinkling and they didn’t put the yellow out. Then, it was a case of who was going to stop. You want to stop in case they red flag it and you sequence to the front. Newman-Haas and Bruno Junqueira hung on and then it was the natural order previous to that and Buddy took his place to the front.

“I was on Vitor’s stand and I said to Scott Roembke, ‘We could see the weather coming and if you are going to go, now is the time to go.’ That’s how it was with Buddy, it was like somebody put on an afterburner, he went around Tony Kanaan and that was that. He had reserve in his hand and saved it until he needed it and off he went.”

Rice executed Roembke’s game plan perfectly on a day with a dramatic backdrop.

“Everyone was chasing the weather,” Rice told SPEED SPORT. “It was getting to us. We were picking people off and starting to roll.

“Scott Roembke and I always played around with fuel maps. I remember Roembke coming on the radio after looking at the weather and saying, ‘OK, babe, we’ve got to go! It’s time. We’ve got to get back to the front. Let’s get rolling.’ I said, ‘OK.’ We twisted the knob, changed the bars, set the thing back up and started to roll. I was conserving my tires and taking my time until he told me it was time to drop the hammer.

“After that, on every lap, I was pulling out and passing someone, pulling out and passing someone. We knew it was going to be close, Junqueira was on fuel, and it was going to be about the in-and-out lap. I dusted him on the in-and-out lap and had a half-straight lead on him. It was the last 15 or 20 laps before that pit stop that we started to roll.”

For seven long laps, Rice led the field slowly around Indianapolis Motor Speedway under caution before the white flag came out and he was one lap away from becoming an Indy 500 winner.

“It was more nerve-wracking for Roembke and Rahal and those guys as we waited it out,” Rice said. “It was wet and I was mellow.

“I wasn’t going to throw it away; I was just waiting for them (race control) to make the decision.”

Because of the severe weather, victory lane was moved into the “Green Room” — an area at the bottom of the Pagoda adjacent to victory lane.

“Not having a normal ceremony is actually funny because I’m not normal, so it was cool to have the celebration stuffed into the Green Room and having a free-for-all celebration,” Rice recalled. “It was super memorable and everybody remembers that because it was different.”

With a win on Memorial Day, Rice added a Fourth of July victory in the race at Kanas Speedway when he defeated Meira by .005 seconds.

“I had to do a little trick to get him and I had been practicing it,” Rice remembered. “It’s just like I preach to those kids, you have to be ready for the moment and try stuff. I was ready to go. With three or four laps to go, I knew what it was going to take to beat him, and I did it. It was fun to race with Vitor. It was super clean and super tight, and I knew I had gotten him.”

“Roembke won that thing because we had a game plan,” Rice said. “We knew what we had to do to win that thing. Roembke laid it all out in the strategy meeting. Once again, we had the game plan down and we were rolling. We got all geared up with 10 to go and were ready to go, but every time I asked if it was time to go, he said, ‘Nope.’

“Finally, with five laps to go, he said, ‘Time to go.’ We went full rich and left everybody behind me. We played the game like we knew where we were at and what we were doing.”

Rice had a fantastic season. 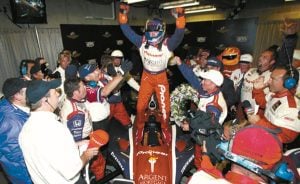 However, Kanaan had a nearly perfect season with Andretti Green Racing, finishing every lap of every race and winning the championship. In 2005, Rice was a leading contender entering the month of May for the Indianapolis 500, but a crash on the fourth day of practice knocked him out of the event with a concussion.

Ironically, he was replaced by Kenny Brack, the driver Rice replaced after Brack’s massive crash in the last race of the 2003 season at Texas Motor Speedway forced the popular driver from Sweden to be sidelined for all of 2004.

Brack qualified Rice’s car with the fastest four-lap average in the field at 227.598 mph, but because it came on day three of qualifications, Brack started 22nd.

Rice returned for the next race at Texas Motor Speedway and remained with Rahal’s team through 2006. He joined Dreyer & Reinbold Racing in 2007 and ’08 and drove in his final Indy 500 in 2011 for Panther Racing.

Today, Rice is as busy as ever. He is a key member of Dreyer & Reinbold Racing, working with the Nitro Rallycross team. He also called race strategy for Santino Ferrucci during the 106th Indianapolis 500 for the team owned by Dennis Reinbold.

“He really understands driving, how a car operates and the feel that he is after in a car, and he is exceptional at explaining and getting that information out of a young driver and applying to what that means to setting up a car to race,” Reinbold told SPEED SPORT. “He is very gifted at translating what is going to be fast at the race track.

“He looks at things that way and knows when there is an opportunity and he knows how to set up opportunities to pounce on if they are out there during a race. That’s what I like about working with him. He was really good about that as a driver and he is good at explaining that with the young drivers he works with.

“He has a lot of people that he does driver coaching for and has worked with us for a number of years,” Reinbold continued. “He did a great job calling Santino’s race on the radio. I’ve enjoyed working with him. It’s been fun to talk racing and setups and everything with him. He’s really a grounded guy that understands what is happening out there.”

“I have kids that are doing everything from short-course off-road to open-wheel to rallycross to sports cars,” Rice explained. “It’s a little bit of everything. There are a lot of kids I’ve worked with and have gone on and become professional race drivers. I’ve tried to pass on my experience and knowledge and help them navigate the racing world.”

Rice’s advice to these young drivers is reflective of the way he drove a race car.

Two Poles In One Day For Power In Iowa

McElrea Wins At Iowa After Post-Race Penalty On Lundqvist

A Shortage Of Crew Members

Double Wins For Foster On Streets Of Toronto

Palou: ‘No Idea’ How Contract Dispute Will Be Resolved

NASHVILLE, Tenn. – Benjamin Pedersen led the opening practice for the Indy Lights Music City Grand Prix on Friday as the Indy Lights Presented by Cooper Tires championship prepares to race on the streets of Nashville for the first time. Pedersen, from Denmark, produced a top lap of 1 ...

NASHVILLE, Tenn. – Ed Carpenter Racing announced Thursday that Rinus VeeKay will remain the driver of the No. 21 Chevrolet for the 2023 IndyCar Series season and beyond as part of a multi-year agreement. The 21-year-old joined ECR prior to the 2020 season and has spent the entirety of ...

MOORESVILLE, North Carolina — The winning team and driver from Saturday’s Gallagher Grand Prix NTT IndyCar Series race has been fined and penalized by IndyCar. The penalties were announced Wednesday at 4:35 p.m. (EST). According to IndyCar: The series has fined Andretti Autosport $25,000 and penalized the team 20 ...

ELKHART LAKE, Wis. – A thrilling climax to the first of three races that will comprise this weekend’s Fleet Farm Grand Prix of Road America saw Sam Corry edge out VRD Racing teammate Alessandro De Tullio by the slimmest of margins.   Just 0.030 of a second separated the pair ...

O’Ward Wins At Iowa; Newgarden Taken to Hospital After Race

IndyCar Qualifications On Hold Due To Lightning

Lundqvist To Start From Pole After Nashville Qualifying Canceled

Rosenqvist Will Remain With McLaren

The Highs And Lows Of Indy For Dreyer & Reinbold

Ferrucci To Sub For Illott In Detroit