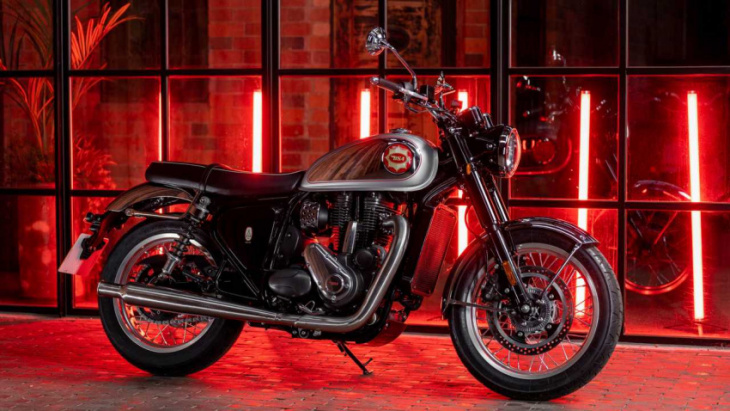 In December, 2021, the recently resurrected BSA Motorcycles unveiled the first new bike on its roster since its revival. The BSA Gold Star appeared just before the 2021 Motorcycle Live show in the U.K., and official specs rolled out not long after.

Slated for release as a 2022 model, the BSA Gold Star packed a 652cc, liquid-cooled, dual overhead cam single cylinder engine, making a claimed 45 horsepower at 6,000 rpm and 55 newton-meters (40.5 pound-feet) of torque at 4,000 rpm. Modern amenities like Brembo brakes and ABS also come fitted as standard. All in all, the combination of styling and specs sounded pretty reasonable for the riders that BSA was hoping to attract—but then, of course, there were delays.

By July, 2022, BSA parent company Classic Legends hoped that it was on the verge of putting those delays behind it. When Classic Legends co-founder Anupam Thareja and its CEO—who is also BSA’s director—Ashish Singh Joshi had a chat with the Classic Motorcycle Channel about it, they seemed excited to clarify future distribution plans. Although the U.K. would be first in line, BSA absolutely intended to roll out to the rest of the world in the not-too-far-off future.

Now that it’s November, 2022, BSA is proud to announce its new partnership with Peugeot Motocycles—and more specifically, with the latter company’s distribution network. (For those unfamiliar, Peugeot Motocycles and the Peugeot car company were related for much of their history, but are completely separate entities in 2022—and crucially, Peugeot Motocycles, much like BSA, is a part of the Mahindra Group, which owns subsidiary company Classic Legends.)

Through the Peugeot Motocycles distribution network, BSA intends to roll out its bikes across Europe, according to the company’s most recent statements. It’s worth noting here that Peugeot also has distribution in other markets, including several in Asia. However, it’s unclear at this time if Peugeot will be bringing BSA bikes to those markets in the future, so we’ll have to wait and see on that front.

“This is the next exciting step for us to bring BSA bikes, a great British brand, to the rest of the world. Peugeot Motocycles share with us a long history of the love of two wheels and their extensive European network provides the perfect route to get the new BSA Gold Star into the hands of customers,” Classic Legends CEO and BSA Company Ltd. Director Ashish Joshi said in a statement.

Are you looking forward to checking out a 2022 BSA Gold Star in person? Let us know in the comments!

Keyword: BSA Motorcycles To Get Distribution In Europe Through Peugeot Motocycles