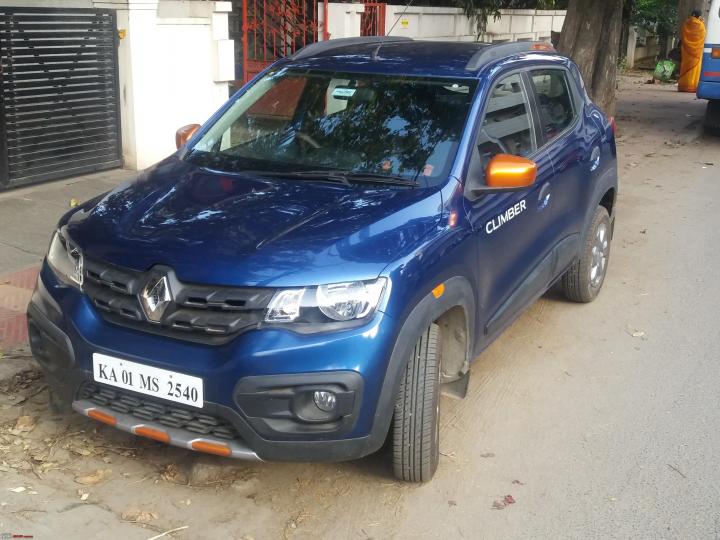 I was thinking of going with a Hyundai Venue earlier but cancelled it due to long waiting times.

BHPian dhruvky94 recently shared this with other enthusiasts.

I hope everyone is having a nice day. So I have booked a Renault KWID Climber AMT and I am getting the delivery in 2 days. The reason I have chosen this car is as follows:

I was thinking of going with a Hyundai Venue earlier but cancelled it due to long waiting times, increased price and this being my first car. Now, people are recommending me against KWID saying that it’s not safe and AMT will have issues with inclines. Is KWID Climber really that unsafe? I like the car overall, but will avoid it if it’s really unsafe. My use case would be 95% city driving.

Thanks in advance everyone!

Here’s what BHPian vishy76 had to say on the matter:

As the owner of a pre-facelift Kwid, my opinion is you should stay away from this car. I am not saying the Kwid is a bad car, I would still pick it from the current crop of entry-level hatchbacks. But do I find it worth 7 big ones? Absolutely not.

The overall build quality, the refinement and the fit and finish aren’t up to Rs 7L standards in my opinion. The AMT is a crude implementation (although improved on the facelift with creep mode), there’s no manual mode, it has a very poor safety rating and the overall reliability of the Kwid isn’t the best either. Costs have been cut very aggressively. Again, acceptable for an entry-level hatchback, but not justified when you are paying 7L.

I would suggest stretching for an Ignis Delta AMT. The Ignis Delta AMT might miss out on one or two features such as the fancy touchscreen and a reverse cam, but it’s a much better-engineered car in my opinion. It gets a better AMT, 4-pot petrol will be a lot more hassle-free to own and is also backed by a good service network. It might also be safer than the Kwid for whatever it’s worth (don’t expect a 4 or 5-star rating of course).

The AMT is a real sore point. The shift quality tends to be alright for the first 20-30K km but deteriorates rapidly after as the clutch ages. If the waiting period is what concerns you about the Ignis, trust me it’s well worth waiting for. If you still can’t wait, get a used one.

Here’s what BHPian ishan12 had to say on the matter:

Just going by the fact that you are spending 7 lakhs, there are way better cars to choose from if you can extend your budget just a little bit. I would highly suggest looking at Ignis, Swift, Tiago, and i10 in their AMT variants. Relative to the Kwid, these cars are way better engineered, safer, and bigger in space. The extra that you would spend on these cars is well worth it as these are way better cars than the Kwid. Also, the extra you spend would be covered in the resale value itself, as any Maruti/ Tata/ Hyundai will hold a better resale than a Renault Kwid.

Any missing feature, like the reverse parking camera etc can be easily installed in the aftermarket.

Here’s what BHPian shashi792 had to say on the matter:

I will also not recommend Kwid. Tiago is a very good car. I would avoid any car with lesser than 4 NCAP ratings. If you are open to a pre-owned route, you will find many options within your budget.

Why not pre-owned Brezza AT, it’s a 4-star car (benefit from Bangalore potholes + easy on the pocket for maintenance).

Here’s what BHPian Everlearner had to say on the matter:

I also strongly recommend Tiago AMT. My brother owns one for the last 4 years and no issues so far.

IMHO, Tiago is a no-brainer.

Kwid does have some additional goodies like a touch screen display, LED DRL, LED tail lights etc., But they are not deal breakers and can be easily upgraded later.