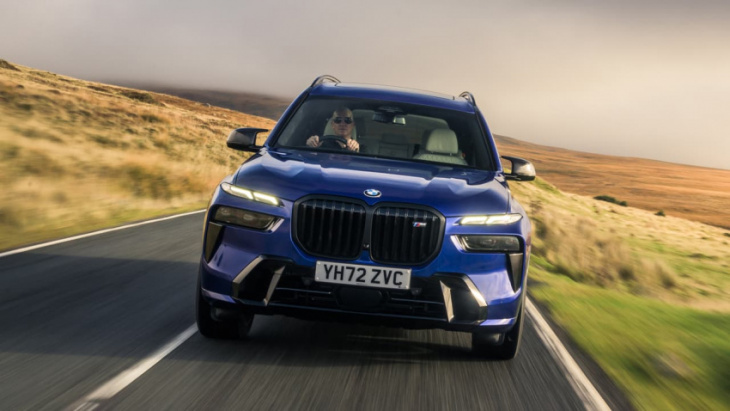 Have we reached peak grille yet? The X7 is BMW’s biggest and most luxurious SUV, and it wants to be noticed. Even the BMW badge on the nose had to be made bigger to match this thing’s outsize swagger.

WHY ON EARTH DOES IT NEED TO LOOK LIKE THAT?

Well, this is the newly-facelifted X7, now with even more IMPACT. The 2022 redesign introduced an EVEN BIGGER GRILLE, as well as the strange split-headlight look that we still can’t get used to. Elsewhere it’s as flat and boxy as ever.

And it’s not just about wedging in as many people as possible, although you do of course get seven seats as standard. The X7 is all about luxury. It takes themes from the 7 Series and the 8er to make BMW’s three-flagship fleet. They want us to see this top-end trio as a separate high-end luxury series.

As a clue, they add the strapline Bayerische Motoren Werke to all the advertising. Why? Because the fashion business often uses the full name for the top-end stuff (Paul Smith, Calvin Klein) and initials for the diffusion line (PS, CK). If you find this almost comically subtle, we’re right with you.

But these aren’t really a separate line. In design and tech, they’re bigger, better, plusher BMWs. End of. If you like BMWs, that’s fine; they polish up the brand. What the 8 Series and X7 don’t do is provide the stand-apart specialness of an Aston Martin DBX or Range Rover, a car the X7’s project team call a rival.

WHAT SEPARATES THIS FROM A RANGE ROVER, THEN?

Unlike the Range Rover, all X7s have three rows of seats. The middle row has the option of either a pair of plush individual thrones, or a three-seat split bench, making this a nursery-run charabanc of unparalleled luxury. Which no-one will use it for.

As usual BMW has thrown masses of technical wizardry at the chassis, so this truck-sized monster can perform surprising off-road feats. Which no-one will use it for.

The same technologies make it track-capable. Which no-one will use it for. (The now-deceased pre-facelift, quad-turbo M50d version equalled the Nordschleife time of the V8-engined E90 M3. Yet more proof that a quick ‘Ring time says nothing about what makes a driver’s car.)

All of which makes the X7 sound vastly pointless. But do those abilities actually foster a sense of well-being and fathomless indomitability, or do they make it cumbersome and compromised? More on that over on the Driving tab of this review.

DO I HAVE TO HAVE A DIESEL?

If you have more compensating to do, there’s the twin-turbo 4.4-litre petrol V8 in the range-topping M60i. That produces a monstrous 523bhp and 553lb ft of torque. All X7s send their power to all four wheels through eight-speed auto gearboxes, and all are now helped along by 48V mild-hybrid tech.

HOW MUCH DOES IT COST?

“The X7 is BMW's biggest and most luxurious SUV, and it wants to be noticed”

There’s no getting away from the fact that the X7 is another superbly engineered and executed product from Munich, by way of a factory in the USA. It’s a fantastic mile-muncher, roomy, luxurious and refined. It’s also beautifully serene inside, so long as you avoid Sport+ mode in the M60i.

All it lacks is specialness of ambience, a sense that you’re not just in a bigger, better-trimmed and better-equipped X1. Unfortunately the fancy materials and glass gear shifter don’t really level-up the X7 enough to make it feel special. Oh, and we won’t even get started on the facelifted looks…

To give it its due, the X7 perfectly illustrates why plush SUVs have become the new luxury saloons. It completely swallows distance. Quietness, a plush ride, huge living space and a haughty vantage point define the experience.

WHICH VERSIONS HAVE YOU DRIVEN SO FAR?

In terms of facelifted iterations, we’ve only been behind the wheel of the M60i. Now, it may come with a sporting bodykit and carbon fibre mirror caps, but this is far from a full-fat M car.

Don’t get us wrong, the twin-turbo 4.4-litre V8 is fantastic and manages to drag the 2,675kg X7 from a standstill to 62mph in a frankly ludicrous 4.7 seconds. It has some character too – whack it in the sportiest of modes and there’s plenty of good noise. Even a few pops and bangs on the overrun, which is a little odd in a giant three-row SUV.

But it’ll also settle into a smooth rhythm combined with the brilliant eight-speed auto gearbox, and the M60i will ride on a wave of 553lb ft of torque. Even with the adaptive air suspension (with its five different ride-height settings) and limited-slip diff you’re unlikely to be attacking too many apexes. You’re better off avoiding Sport+ mode and focussing on Comfort, with its uber-light steering and floaty ride – even on the standard 22-inch wheels. Take a more leisurely approach and the X7 steers with measured authority, rolling surprisingly little and holding onto an impressive dignity as it sweeps through bends.

WHAT ARE THE STATS ON THE OTHER ENGINES?

The 40i gets 375bhp and 398lb ft of torque, with a 0-62mph time of 5.8 seconds and an electronically-limited top whack of 155mph. It’s unlikely you’d want to travel any faster than that in something of this size. Worth noting that even on the six-cylinder engines you can spec an ‘M Sport Package Pro’ that adds the M60i’s impressive M Sport brakes and a noisier exhaust.

IT IS MASSIVE ISN’T IT?

You hardly need us to tell you the X7 is annoyingly bulky in city centres. Or car parks. Or chocolate box Brit villages. But it does its best to help you with an umpire’s-chair seating position, slabby sides and cameras pointing in every direction. The optional four-wheel steering (standard on the M60i) shrinks the turning circle too.

BMW’s ‘reversing assistant’ also helps. It keeps a rolling memory of your exact steering movements for 50 metres. Drive forward into a difficult space or up a narrow lane, and it’ll steer you slowly back (even the next day) along exactly the same track.

For reference though, an X7 is just over 5.0 metres long, exactly 2.0 metres wide and over 1.8 metres tall.

If driving the X7 is plush, riding in it is more so. The seven-seat layout is standard, but for an extra £600 you can have a six-seat setup that replaces the middle bench with two captain’s chairs. Said layout gives the rear passengers as much comfort and pretty much the same space as the front two, although even the seven-seater layout is hardly a park bench.

All the seat adjustment and folding is electric. Show-off, yes, but painfully slow too.

The view out is great, with deep windows and plenty of glass – including a massive three-section panoramic sunroof as standard. Everyone gets vents and adjustable climate and reading lights and cupholders and power sockets. No cheap seats here… unless you get the optional heated and cooled front cupholders while the rest are – what – thermally passive?

If all three rows are up, the boot is a supermini-sized 326 litres. In the two-row setup, surely how people will use this car, it’s a mammoth 750 litres. Fold all but the front seats flat and you’ve got 2,120 litres of space. Practical. There’s also carpeted split tailgate which makes for a great picnic bench, and the air suspension means you can drop the rear for easier loading.

And now we must get into the really important bit – screens. The facelift has brought with it BMW’s new curved display which integrates a 12.3-inch dial display and a massive 14.9-inch central infotainment touchscreen into one long unit. Looks smart and it’s a reactive touchscreen, but messy fingerprints are a bit of a nightmare. Thankfully BMW has kept its old iDrive controller which you can use on the move. It’s just a shame that for the X7 said controller (and the gear selector) is made from a strange, tacky-looking crystalised glass. Oh, and whilst we’re on the subject of materials – avoid the carbon fibre interior bits on the M60i – it’s not saving any weight and a light wood is far classier. BMW also says that the dash is now covered in something called ‘Sensafin’, which apparently is a high-quality vegan leather.

What should I be paying?

In terms of options, you’ll probably want to add the Technology Plus pack, £5,000, which includes a fantastic Bowers & Wilkins surround sound system and some extra driving assistance. The six-seat arrangement is £600. Bigger wheels include £1,500 22s or £3,000 monster 23s.

Strangely you can have something called the xOffroad pack for £2,600, which adds four off-roady modes that you’ll never need to use and a proper mechanical (electronically-controlled) diff lock. Worth noting that if you go for that you can’t have the £3,000 ‘Executive Drive Suspension’ (standard on the M60i) that adds the mighty active roll stabilisation system.

2023 BMW X7 Review: One of the Nimblest Behemoths on the Market