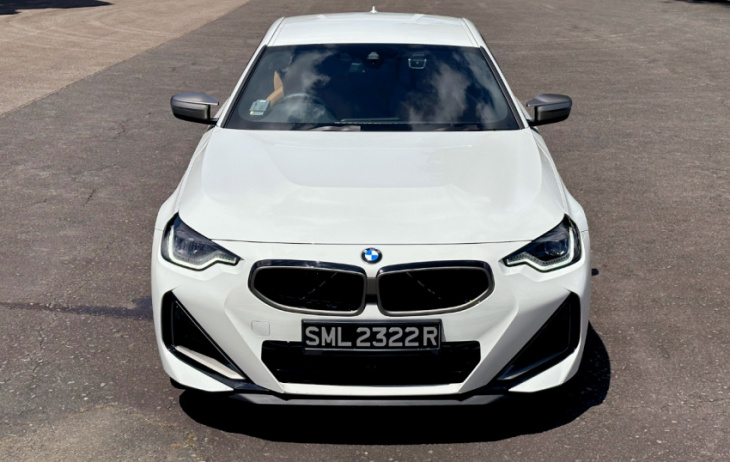 You’ve probably noticed this: small coupes are a hard sell these days. That’s why hardly anyone makes one these days. But the reputation that BMW enjoys today was built mostly on this type of car. Small and fast coupes like the legendary E46 and the earlier E36 M3s. So persevere it must.

Divisive looks and high price aside, the M240i is a clever small coupe that combines blistering performance with a surprising amount of refinement and everyday usability.

The newest M240i mostly adheres to the traditional BMW recipe of a low-slung compact coupe body paired with a large engine. However, instead of the power going to just the rear wheels, the M240i has an all-wheel drive system. Fortunately, as I’ll get to later, it’s a heavily rear-biased system. 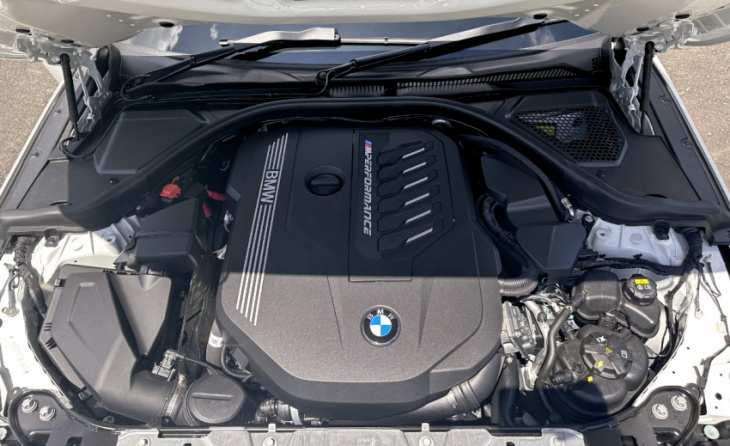 Underneath its long-ish hood lies the revered B58, a motor endorsed and employed by Toyota its Supra coupe. It’s a 3-litre turbocharged straight six putting out 374hp and 500nm of torque – very big numbers for a car that isn’t that much bigger than a small hatchback.

It is this motor that gives the M240i a unique advantage amongst its rivals because they mostly rely on highly competent but uninteresting four-cylinder motors. Admittedly, modern four-pots are smooth and capable of big power, but none can match the creaminess., noise, and effortless delivery of BMW’s big-chested straight six. 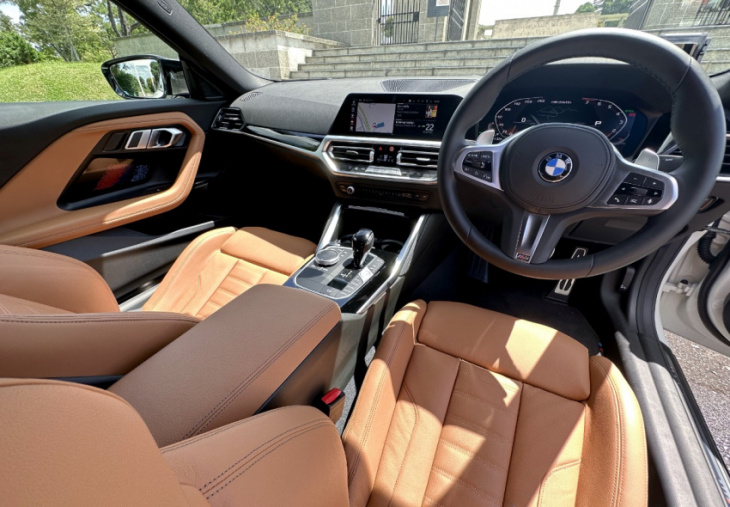 The motor is eager and responsive with only the very slightest hint of turbo lag. Combined with the very fast and almost telepathic ZF 8-speed gearbox, the M240i always feels fast. Furthermore, despite being turbocharged and having to adhere to stricter emission and noise regulations, it actually makes some delicious straight-six noises. Though it must be said that you don’t get to hear much of them in the car since the cabin insulation is good and whatever noise that does make it through is drowned out by the fake engine noises coming from the speakers. Why, BMW, why?

It’s relatively frugal too. Over 200km of testing, I managed 8.1km/l which is remarkable for a 3-litre straight six that can propel a 1.7-ton car from a standstill to 100km/h in around 4 seconds. No doubt this figure would be higher if you were to drive less enthusiastically. I managed nearly 12km/l on a highway run. 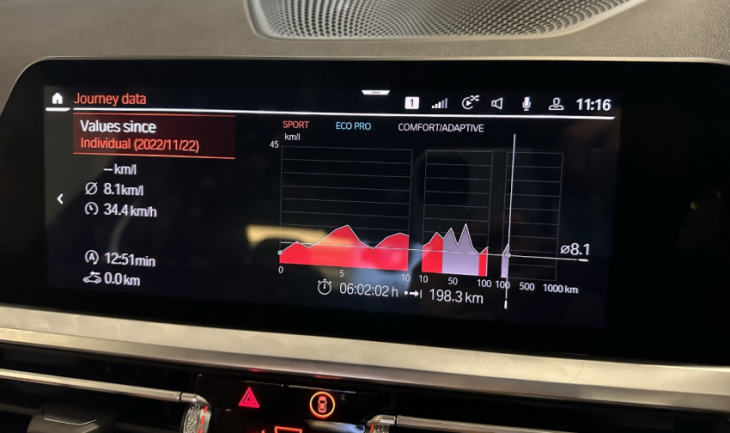 If the powertrain is impressive, so is the adaptive suspension. It’s firm but there’s a real plushness to the ride that’s evident even in the stiffer Sports setting. Even on poorly paved roads, the M240i cossets its occupants in a way that you don't expect from a sporty coupe.

How is it to drive? The steering wheel, in typical BMW fashion, is too thick, but the seats get low and offer good support thanks to adjustable side bolsters. 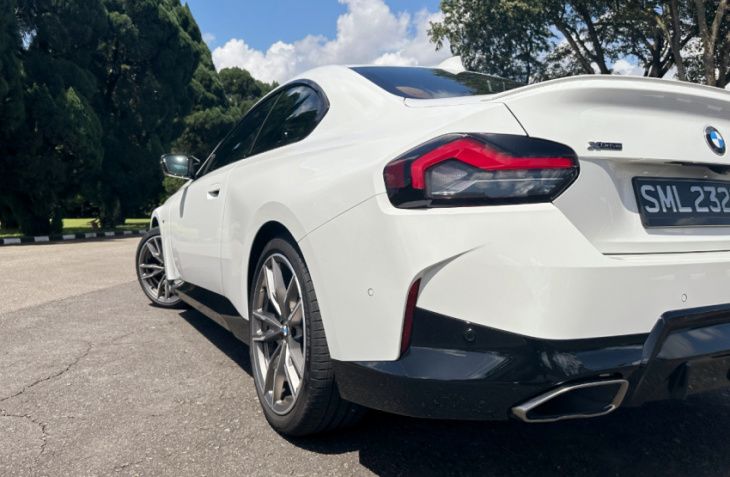 Let’s get one thing out of the way. This isn’t a baby M2. It’s very fast and will likely outgun an M2 from a standstill to 100km/h, but it isn’t nearly as engaging to drive. But that doesn’t mean it isn’t fun.

BMW fans who worry that the M240i would feel too safe and inert because of its xDrive system should be relieved. This car, unquestionably, feels rear-wheel driven. It also feels agile and lighter than its claimed weight of 1,765kg would suggest. And if you are brave enough to push it into a corner, the rear will start to come around. However, it never slides and scrambles out of a turn the way a true RWD car would. The front wheels will eventually help straighten you out. But, crucially, it feels fun. 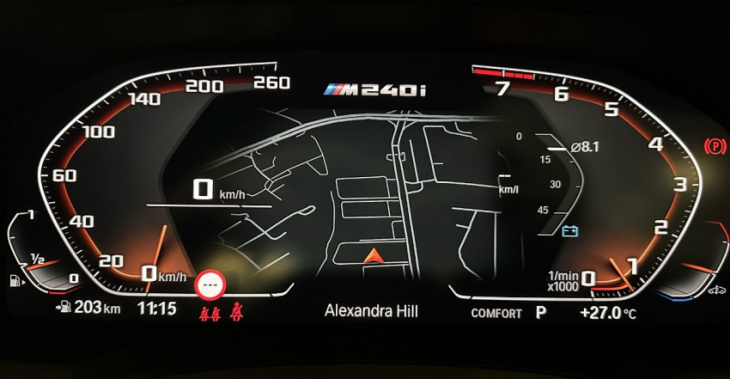 The M240i is surprisingly practical. The boot has a capacity of 390 litres which, it might surprise you to learn, is actually more than a hatchback like Audi A3 or Volkswagen Golf. Realistically, you can fit a single very large suitcase or two medium-sized ones. And if you need more space, the rear seats fold. Speaking of rear seats, they can just about accommodate adults if they are all of about average height and they don’t mind a bit of a squeeze. Toddlers and young teens will fit behind fine.

The interior is upholstered with “Vernasca” leather and it looks and feels luxurious – a big step up from the last generation. And unlike some of its rivals, the M240i doesn’t rely heavily on its touchscreen and still has physical controls for essentials like air-conditioning and volume. The infotainment system is iDrive 7 and it’s arguably the brand’s best yet. It is intuitive, fast, has pleasant graphics, and supports both wireless Apple CarPlay and Android Auto. 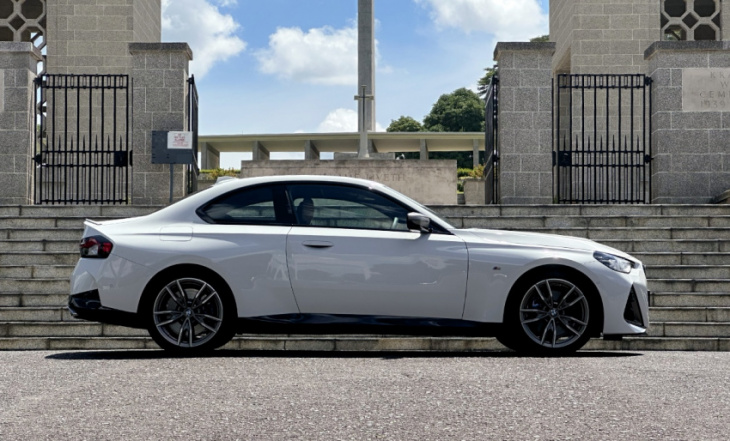 The new generation of BMWs have come under a lot of fire for their design and the new G42 2 Series has not been spared. I’ll admit I’m not a fan but I will say it looks less offensive in the flesh. Certainly, it’s miles more aggressive than its predecessor. But to my eyes, the front intakes I think are awkward and the rear looks squashed. It’s a complete u-turn from the last generation of very sleek and balanced BMWs. That said, I think it’ll look better in dark colours like Thundernight (purple) or Black Sapphire because it’ll help conceal the elements I find problematic.

But even the questionable styling is not enough to dampen the M240i’s competence and charms. This is a very clever car from BMW. One that gives its owner a taste of BMW M levels of performance without sacrificing much in the way of comfort, refinement, and practicality. There’s no doubt the upcoming G87 M2 will be faster and more exciting, but it will have to be incredibly special to be a better everyday car than the M240i. 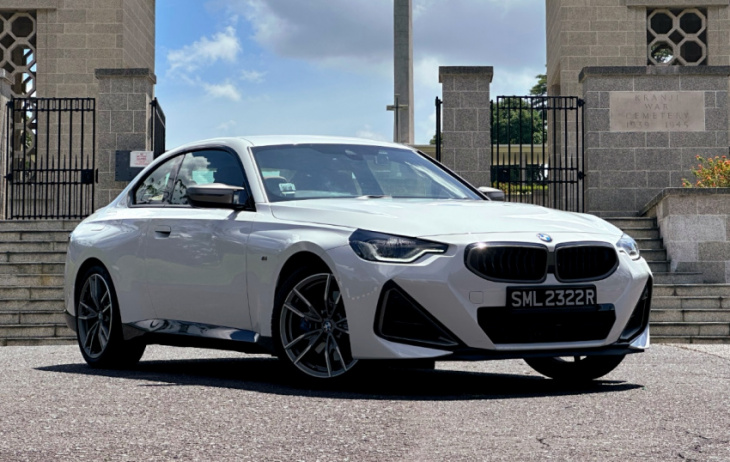 The BMW M240i is available in Singapore now with prices starting at S$367,888 (correct at time of publishing). Price includes COE and VES surcharge.