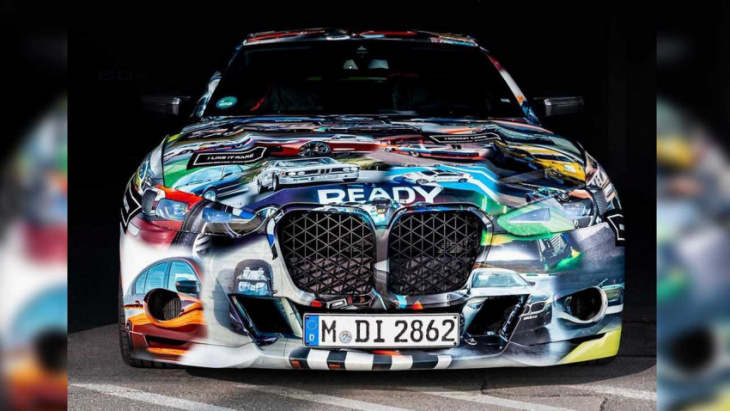 We know that at least one more new BMW M car is coming sometime this year. The automaker said as much during the Goodwood Festival of Speed last week, and now BMW M boss Franciscus van Meel has teased it on his Instagram, showing off the company’s modern-day 3.0 CSL model.

This is our first look at the M4 CSL-based Hommage model that uses the coupe’s hard points as a starting place for the model’s bespoke body panels. The car’s M-inspired livery does not help in our effort to identify the unique styling cues, but we can spot a few things. The coupe wears a pair of kidney grilles above an aggressive lower bumper opening that’s covered by the license plate. On the outside of the bumper are round intakes that look like they feed air to the cooling system.

The teasers also show off the coupe’s rear, where we can see the roof-mounted spoiler along with what looks like new rear fenders that flow into the big wing that spans across the trunk. Shadows obscure the rear diffuser, but we can spot four exhaust pipes sticking out the back. The car has wider front and rear fenders, and we expect there are other styling tweaks we can’t see.

While BMW announced that we will see a new M car this year, we don’t know much about it. Rumors point to the model producing 600 horsepower (447 kilowatts) and 516 pound-feet (700 Newton-meters) of torque. The powertrain will allow the coupe to hit 62 miles per hour (100 kilometers per hour) in 3.5 seconds, with a top speed under 200 mph (320 kph).

BMW will allegedly power the rear wheels through an eight-speed ZF gearbox, but a sticker on the rear reads “6MT FTW” that alludes to a six-speed manual in the car. There are other stickers, but we can’t read them.

The modern-day 3.0 CSL that BMW is preparing will allegedly sell for €600,000, and that’s not cheap for the special M Hommage model. However, helping with its price will be its exclusivity as reports indicate that BMW plans to produce just 50 examples of the car as the company celebrates 50 years of its BMW M division. Last week, we also saw BMW debut the first official M3 Touring wagon, and we saw the M4 CSL break cover in May.