This baby electric SUV, the new iX1, is now the smallest EV BMW builds. And boy, oh boy, is it a different kettle of fish to the wacky, carbonfibre-clad and lounge-like upholstered i3 that’s recently gone off sale.

You couldn’t put the two further apart in terms of what they seek out (or sought) to achieve; the dinky supermini was a trendsetter for the new EV dawn, while this new iX1 is designed to get as many of us to go electric without offending or deterring us.

But BMW’s got actual proof this formula works. While the iX still flies the weirdo flag, the i4 and iX3 look entirely normal but just so happen to be great to drive. Can the iX1 pull off the same trick? 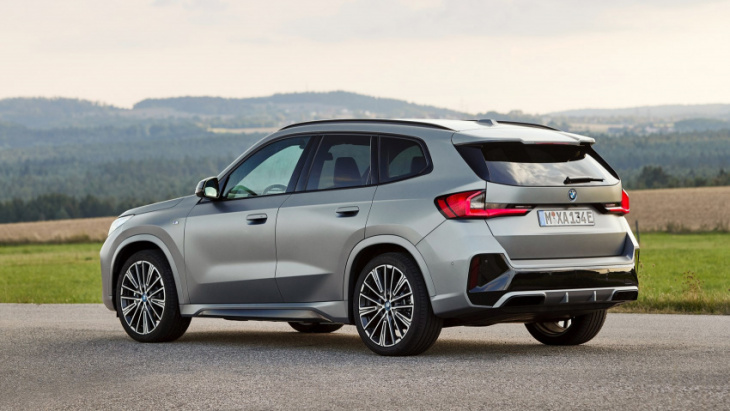 Conventional is putting it mildly. The new iX1 can look almost identical to the new X1 crossover and, as you can see from the images here, you don’t have to have it trimmed with BMW’s traditional blue inserts around the grille, bumper arrangement and side skirts. It’s a handsome car – to my eye at least – managing to freshen up its design formula in the segment it sits in without overdoing it just to stand out. Take note, i7. 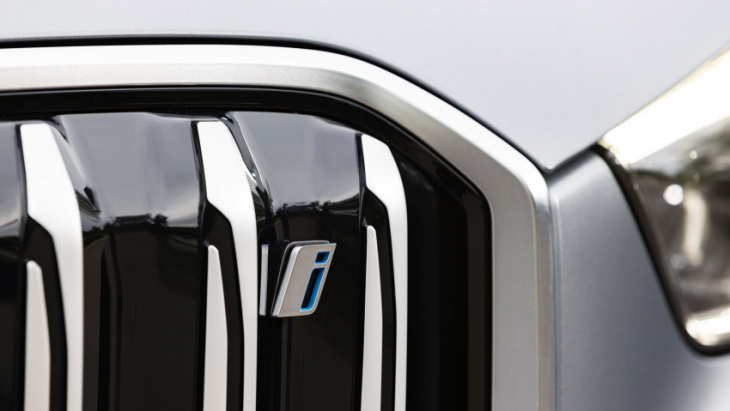 The interior is equally normal. It’s genuinely a nice place to spend time; the seating position is just right, and the tall dashboard is set quite close towards you and the whole layout is clean and modern. There’s sense and sensibility in here with the materials used, where the well-laid out buttons on the steering wheel and that impressive driving position blend nicely with BMW’s curved screen and the (not quite) ‘floating’ centre console.

A console that happens to be iDrive controller-less like the 2-series Active Tourer, by the way; the argument is that because the dashboard is higher up and closer to you for you to reach the screen much easier than in something like an iX or a 5-series, there’s no need for the clickwheel. I’ll be honest, on this occasion, I don’t miss it. And, regardless of what spec you get, it’s mature, well-equipped and feels solid – unlike the overly-plasticky Mercedes EQA or quirky-wheel-and-that’s-it Audi Q4 e-Tron. You can fit tall adults behind tall drivers at a pinch, and the boot volume is way larger than you get in Merc’s electric EQA, too. 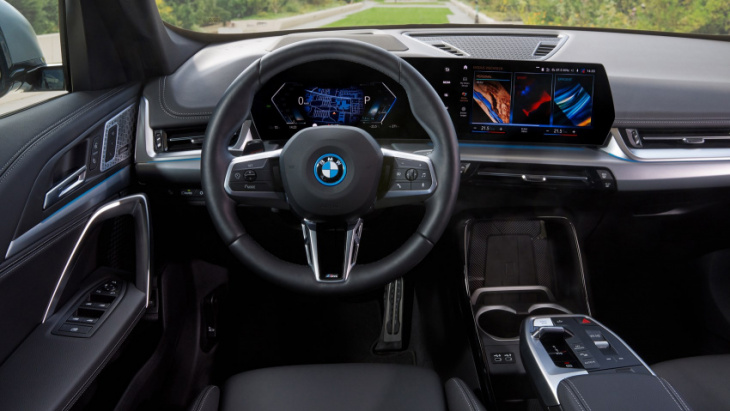 There are two specs available: xLine and M Sport. Every iX1 has 18-inch wheels, adaptive suspension, parking sensors and a rear-view camera, BMW’s curved screen infotainment with 10.25-inch digital instruments and a 10.7-inch central touchscreen. Go for M Sport (pictured) and you get 19-inch wheels, some black trim and roof rails as well as BMW’s technology pack (which bundles keyless entry, folding mirrors, adaptive LED headlights and wireless charging together).

So darn sensible – any spice under the skin?

This is where things get interesting. The new iX1 debuts with the xDrive30 powertrain, a twin e-motor setup developing 268bhp and 364lb ft and food for a sub-six second 0-62mph sprint. So, despite being a smidge less powerful than an iX3, it’s a whole second quicker.

While it’s not confirmed, it makes sense for BMW to offer a cheaper rear-drive variant to lower the entry price. But, even so, the £52k price of this xDrive30 variant offers more performance than a comparatively priced Mercedes EQA and Audi Q4 e-Tron. Take that, fellow Germans. 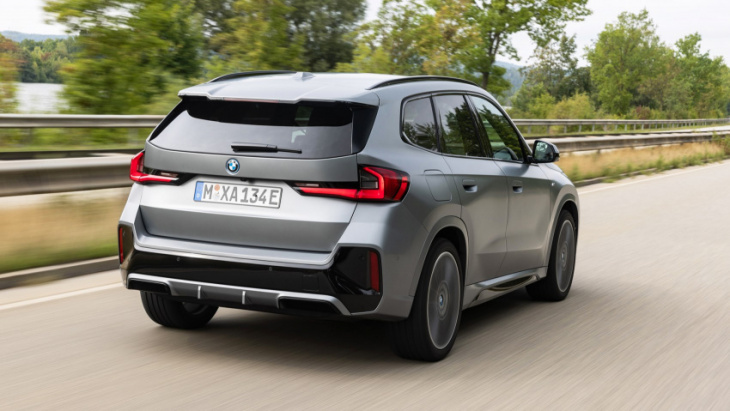 Of course, BMW has to offer something unique. And, given its partnership with composer Hans Zimmer, the – ugh – ‘IconicSounds’ digital soundtrack that comes as you accelerate or brake provides more whooshes and hums than an 80s arcade machine. It, even after being implemented in several cars by now, continues to be naff. Thankfully you can switch it off.

But you know what? This thing is quick. Far quicker than it really needs to be, frankly. The accelerator pedal, even in ‘Personal’ (read Comfort) mode, is pin sharp. ‘Duh, it’s an electric car,’ I hear you say. Yes, true. But an ID.4, even the GTX model, rolls on the torque even if you floor it; with the iX1, all the power is there instantly, giving you a proper kick in the back. There’s even a Boost function, activated either while in Sport mode or by pressing a paddle on the steering wheel, gives you 10 seconds worth of additional power (to the tune of 41bhp more) if you feel like it. 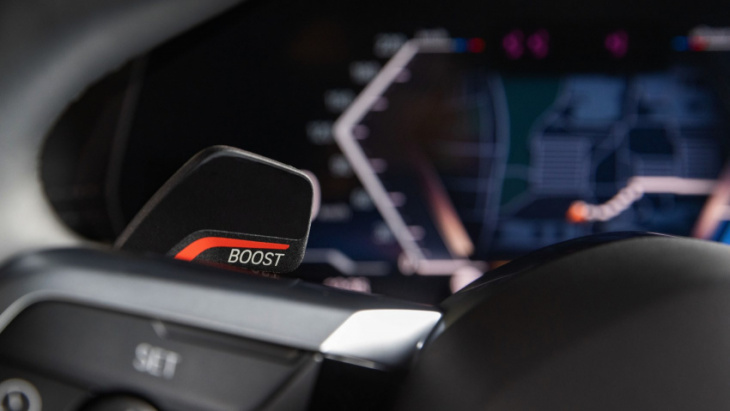 It’s zippy and direct to drive, but can be just as at ease cruising; and, so long as you have those IconicSounds off, utterly silent even at speed. Most EVs have at least a little bit of motor whine in the background – not here. The only thing you really hear is a little unwelcome wind noise hitting the door mirrors.

I need to ask the usual electric car questions now…

Yes, range and charging. BMW claims up to 272 miles on a charge, and comes with up to 130kW DC fast charging via its CCS port. At the fastest charging speeds, BMW says it’ll take 29 minutes to charge the battery from 10 to 80 per cent, or add 75 miles in 10 minutes. 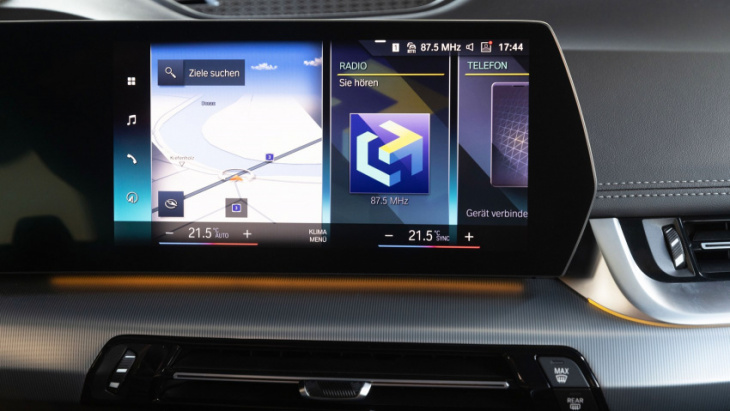 On top of that, if you have a navigation point set, the range predictor will adjust better to the route for a more accurate gauge of how long you can go before needing a zap and, if you navigate to a charging point, the iX1 will actively precondition its battery (by warming or cooling it) to make sure it’s at the optimum temperature for allowing the highest charge rate possible from the moment you plug it in.

Has it got that BMW handling sparkle?

Mostly. You have to remember that the iX1 is around 400kg than even the fattest combustion engine X1, but BMW’s engineers have hidden its weight relatively well.

Compared to the regular X1, the biggest difference is in the suspension; all iX1 models get adaptive suspension as standard, and the iX1’s damping is far firmer than X1s with engines attached. On the road, that translates to wheels that feel like they’re pushing into the tarmac as hard as they can; great for giving a sense of assuredness when having a little fun on some B-roads, but the ride quality can feel on the firm side. 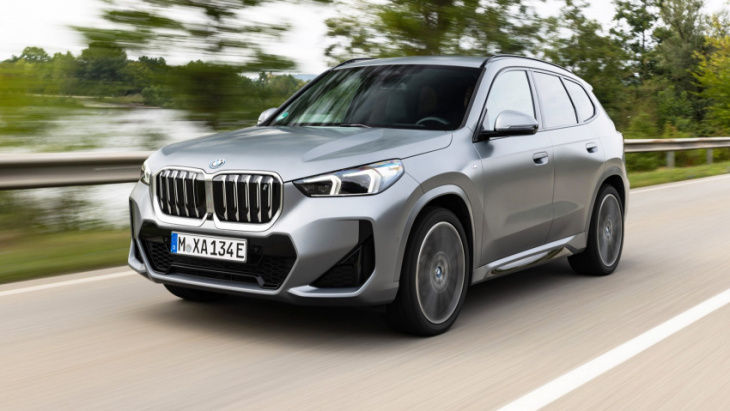 The steering is traditionally modern BMW; immensely direct off-centre – where even a mere muscle flex one way or another will send the nose scouting out for a corner – but it feels immensely assisted to the point of not really feeling the road at all.

Even so, get in the groove with the iX1 on some back roads It’s quite fun to hurl around – something not really expected from a small premium crossover – but feels planted and assured as you cover ground. The adaptive suspension is helpful on the motorway, too, managing to quell some of the roughest road surfacing amicably.

All of that zippy power and assured handling almost makes the iX1 feel a little like a hot hatch. It’ll certainly keep up with plenty of them, even if it’s not quite as sharp to drive.

But, compare the iX1 to its closest competitors – the Mercedes EQA and Audi Q4 e-Tron – and it has them both licked. Yes, £52k is a high asking price, but similar money gets you a Q4 e-Tron 50 Sport (which is slower and less well-equipped) or an EQA 350 AMG Line (which is also slower and feels tackier inside).

So, despite looking resolutely normal, the iX1 manages to inject a bit of spice in to electric crossover ownership, while managing to feel like more of a premium product.