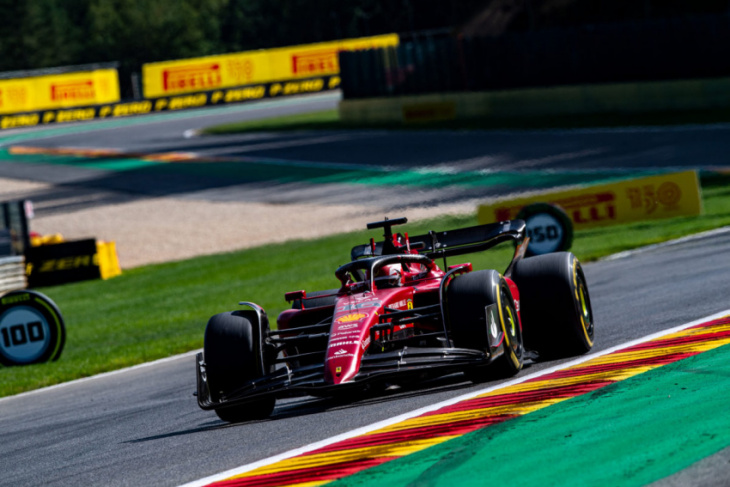 Ferrari boss Mattia Binotto has defended his team’s decision to pit Charles Leclerc in the final laps of the Formula 1 Belgian Grand Prix.

Running fifth in the closing stages, Leclerc stopped on the penultimate lap for a fresh set of soft compound tyres.

It was a move designed to give the Monegasque an opportunity to set the fastest lap and claim the bonus championship point.

His task, however, was made more difficult when he fell behind Fernando Alonso shortly after exiting the pits.

The Spaniard compromised Leclerc’s final lap such that, while the Ferrari driver repassed the Alpine to finish fifth, he was unable to set the fastest lap of the race.

Adding insult to injury, a five-second post-race penalty was then handed out for pit lane speeding at that late spot, served to demote Leclerc back to sixth.

In its pursuit of a bonus point, Ferrari instead cost its driver two points as it introduced needless risk into the race’s conclusion.

“No, I think there is no need at all,” Binotto responded when asked if the team’s strategic approach needed a rethink.

“Obviously there is always a need to try to improve, and there are lessons learned on which we are looking at, reflecting.

“I think there is a lot of perception from outside compared what are the truth, and the reality I think sometimes we’re not doing mistakes, where it may have been perceived as mistakes.

“If I look at today, and I focus on today, I think that the call to stopping [Leclerc] was the right call.”

Binotto went on to confess the team knew it would be close with Alonso as Leclerc rejoined, but hoped fresh tyres would afford enough of a performance boost to reclaim the spot from the Spaniard if needed.

He also explained the post-race penalty for speeding in pit lane related to the overheating issue he suffered in the opening laps.

During the Safety Car to recover Lewis Hamilton’s stricken Mercedes early in the race, the Leclerc reported seeing smoke from his right-front wheel.

A visor tear off was found to have made its way into the brake duct, and while removed in a Lap 3 pit stop, it proved to have a more lasting impact.

“I think it was 0.1km/h in the average speed in the pit lane,” Binotto explained of the post-race penalty.

“We were not using our normal sensors measuring the speed because they have been failed during the overheating of the front-right.

“Our recovery, simply strategy, maybe was not such accurate.

“So I think overall it has been an unlucky situation.

“It’s not because of that we should stop deciding and being brave to go for a fast lap when conditions are there to go for it.”

Leclerc, who accepted responsibility for the late-race penalty, has now slipped from second to third in the drivers’ championship, 98 points adrift of Verstappen who won his ninth race of the season.

The Dutchman’s advantage is such that he could mathematically seal the championship at the United States Grand Prix in four races time.

Eight rounds remain in 2022, the next taking the circus to Zandvoort for the Dutch Grand Prix, starting Friday.