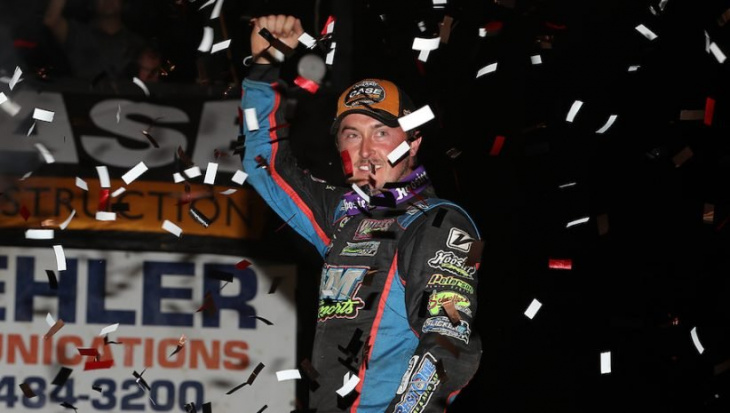 DAVENPORT, Iowa — After waiting 45 races before claiming his first World of Outlaws CASE Construction Equipment Late Model Series win, Tanner English said he thought the path to his second victory would be easier.

Less than 24 hours after scoring his first career Series win during the second night of the Quad Cities 150 at Davenport Speedway, he returned for the event’s epic $30,000-to-win finale, passing Ryan Gustin for the lead, and holding off Bobby Pierce for back-to-back wins.

Despite finding the winning formula for the second consecutive night, his journey to Victory Lane was very different.

English started on the pole of Saturday’s 70-lap feature but lost the lead to Ashton Winger early on. He fell out of the top five and bided his time until his car came to life with less than 20 laps left.

That patience paid off as English worked his way to third on a restart with 11 laps remaining.

When the green flag flew, he dropped to the bottom, sprinting past Ryan Gustin as lap 62 clicked off the scoreboard.

It looked like he’d be on cruise control to the checkered flag, but a yellow slowed the field with six laps to go, pitting English against a surging Shannon Babb and a familiar foe — Pierce.

The two drivers pulled away from Babb on the restart and waged war for the final six laps. Pierce swung his car to the top, hoping to find momentum while English stayed the course on the bottom.

As they came to the checkered flag, English found the speed he needed in turn four, beating Pierce to the line by a few car lengths.

The rookie of the year contender said his patience in the race’s first half set the stage for his rise to the top at the end.

“At the start there, I was just biding my time and trying to not spin the tires because I knew what I had,” English said. “I knew they needed to last, and we just made it last, and with about 10 or 11 to go, I had caught back up to them. I don’t know if their tires just went away or what happened.

“Mine just stayed the same the whole race, and I didn’t really lose any time. So, I don’t know. The car was just awesome.”

English’s second straight win moves him closer to Dennis Erb Jr. in the standings. Erb finished 19th after being involved in the caution with 11 laps left.

Erb’s points lead has been cut to 98 points with 12 races remaining, while English leads Blair by 84 points in the Rookie of the Year race.

Pierce crossed the line second for the third straight night.

“Tanner drove a hell of a race, I was trying all I could to catch him,” Pierce said. “The cushion was very, very thin and there was a little left in turn three but not enough out of four.

“This place provides such good racing all the time. It was a little more dirty tonight than I preferred, but it eventually got there. It just took a long, long time to get there. The last five laps, I was trying all I could because I knew Tanner was so good on the bottom that it was going to be hard to beat him without being ahead of him on the restart.”

Shannon Babb crossed the line third after starting last in the feature.

“They did a hell of a job of preparing that track and reviving it,” Babb said. “We were able to work on our car and make a few adjustments. And starting last, I was like, man, these guys are going to lap me in a hurry, so I got to get my ass going.

“They did a great job with the track, and we were able to go everywhere that I needed to go. I’m just impressed with this new car. This Longhorn chassis is really fast, this Vic Hill engine is really good, and I’m just really tickled to death to get by a lot of those cars.”

Shane Clanton, the 2015 Series champion, finished fourth — his best finish of the weekend.

“I feel way better than I’ve ever been here,” Clanton said. “Yes, they changed the shape of the racetrack a little bit, but also, my race car is a little better, too. So, that makes me feel real good.”

“It’s great doing it at home, at Dad’s racetrack, and with everyone I know that’s here, it’s awesome,” Kay said. “I’ll take [a top-five] anywhere.”