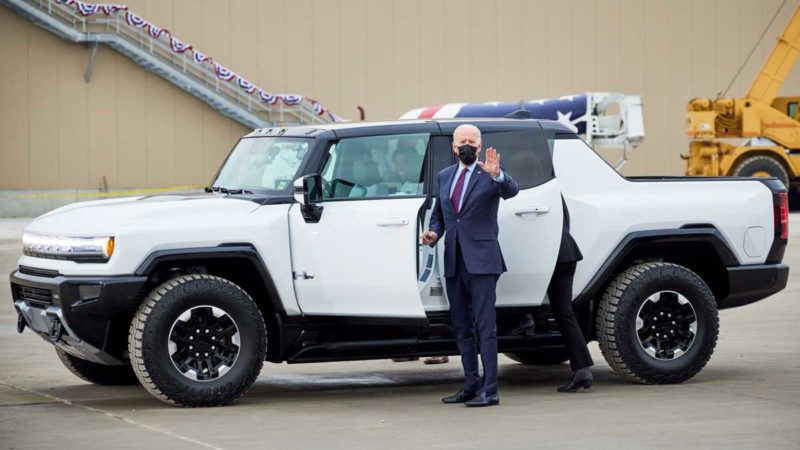 Biden gets in the Hummer EV with GM CEO Mary Barra. Source: GM

US president Joe Biden has flagged an accelerated shift to electric vehicles and clean energy, firstly to deflect soaring costs of oil and gas caused by war in Ukraine, and to stop “tyrants like Putin” using fossil fuels as a weapon.

The comments from Biden came as the US announced a ban on oil, gas and coal imports from Russia, with the UK also banning imports and the EU flagging a two thirds reduction of Russian gas imports within a year.

The big question about the bans and curbs on Russian imports is the impact on prices – particularly at the petrol pump – and where alternative fuels will be sourced.

“It should motivate us to accelerate the transition to clean energy,” Biden said.

“This is a perspective, as I said, that our European allies share and the — a future where together we can achieve greater independence.”

Biden also challenged the prevailing conservative view that the Ukraine war and its impact on commodity markets – particularly fossil fuels – should lead to loosening environmental regulations or pulling back on clean energy investment.

“(That) won’t, will not lower energy prices for families,” Biden said.

“But transforming our economy to run on electric vehicles powered by clean energy with tax credits to help American families winterize their homes and use less energy, that will — that will help.

“And if we can — if we do what we can, it will mean that no one has to worry about the price at the gas pump in the future.

“That’ll mean tyrants like Putin won’t be able to use fossil fuels as weapons against other nations.”

The US only imports a fraction of the fossil fuels from Russia that Europe does: 700,000 barrels of oil for the U.S. per day, compared to four and a half million barrels for Europe.

Still, the impact to US consumers has been about about 75 cents a gallon at the petrol pump since Putin began to amass troops at the Ukrainian border in early November.

In a later background briefing, White House officials said the US – despite lifting production in the short term – would have to accelerate the shift to renewables.

“The reality is we can’t drill our way out of dependence on a global commodity that’s controlled, in part, by foreign nations and their leaders, including Putin.

“The only way to eliminate Putin’s and every other producing country’s ability to use oil as an economic weapon is to reduce our dependency on oil.

“This crisis reinforces our resolve to make America truly energy independent, which means reducing our dependence on fossil fuels.”