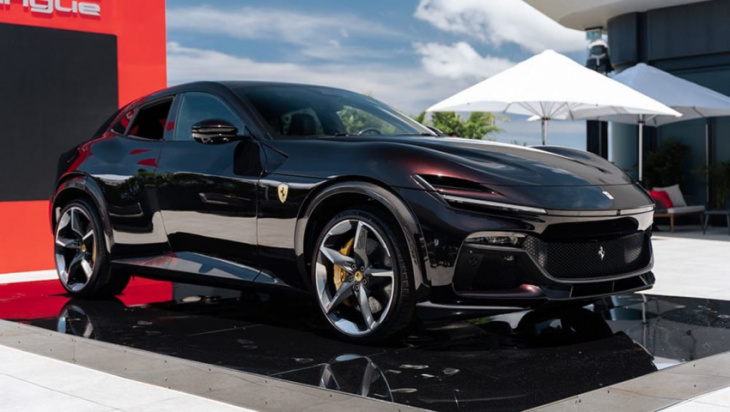 The Ferrari Purosangue made its Australian debut at the Universo Ferrari event in Sydney.

Upset that Ferrari has built an ‘SUV’? Well, the Italian brand and its customers don’t care because the ‘high-riding sports car’ is already a sell-out before it’s even hit the production line.

The Italian brand gave the new model its Australian debut last weekend at the opening of the Universo Ferrari event in Sydney, with the brand’s chief marketing and commercial officer, Enrico Galliera, on hand to present the new model.

Galliera also revealed the company has had to stop taking orders for the new model before it has reached production, the first time Ferrari has had to make such a decision for a series production model and not a limited-edition special.

Galliera admitted demand for the Purosangue was “much more than we expected”. To that end, the order books will remain closed until Ferrari can begin producing the car and catch up to the demand.

But Galliera and Jan Hendrik Voss, president of Ferrari Australasia, didn’t want to put a timeframe on when that would be. Given Ferrari typically has wait times of up to two years for its models, it’s likely that the Purosangue waiting list stretches well beyond 2024.

The only indication of how many orders Ferrari is holding was their comment that the Purosangue would never exceed more than 20 per cent of the brand’s total volume. Given Ferrari sold slightly less than 12,000 cars in 2021, that suggests an annual sales volume of between 2000-2500 Purosangue. That, in turn, suggests the company could be sitting on more than 5000 orders for the new car before customers have even had a chance to test drive it. 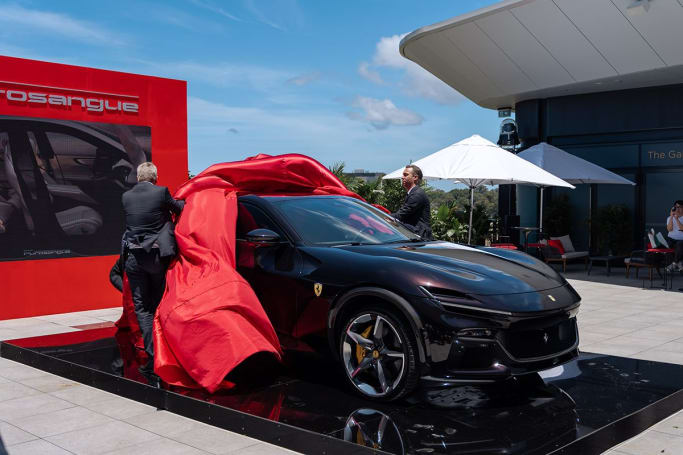 The Italian brand gave the new model its Australian debut last weekend at the opening of the Universo Ferrari event in Sydney.

It also rules out any dramatic expansion for the brand, which is often one of the key reasons for sports car brands to move into the SUV market. Galliera said Ferrari’s priority for orders is its existing customer base, which means newcomers to the Prancing Horse are at the back of the queue.

“We won’t be able to satisfy them in the short-term,” Galliera conceded.

Which is an interesting conundrum for a vehicle with a starting price of $728,000 (plus on-road costs) in Australia. The order books for the Purosangue will remain closed until Ferrari can begin producing the car and catch up to the demand.

The Ferrari executives are adamant that the Purosangue is not an SUV and is actually a “four-seat sports car”, and while at first glance that may sound like ‘PR speak’ the reality is the Italian model is designed with sealed road performance in mind. Unlike other would-be rivals, the Purosangue was never designed with off-road capability in mind.

“Everybody needs to make their own decisions, we decided we wanted to build a sports car, that’s the true soul of the car – a thoroughbred,” Voss said, referencing the Purosangue’s name in Italian.

“The objective was not to build a Ferrari SUV, we may play in that segment because it’s a very versatile sports car, but it was not the ambition of the project [to have off-road capability]. The ambition of the project was to stay true to early origins, with Enzo enjoying four-seaters, and now with the technology now ready to make a four-seat sports car we enter, well we create a new segment. 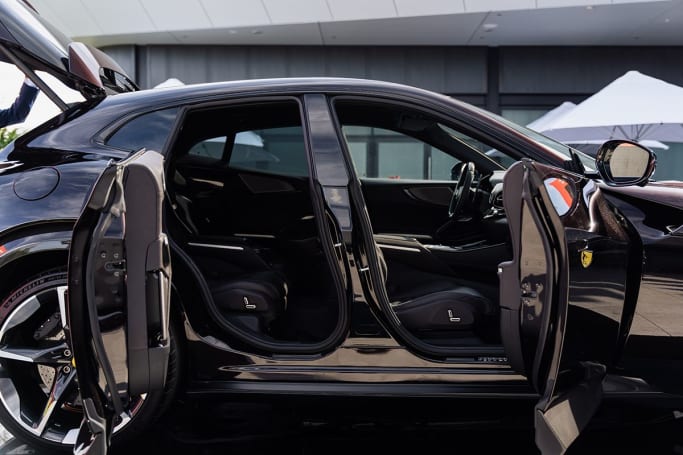 The unique ‘welcome door’ layout has been chosen because it allows for a smaller rear door and therefore a shorter wheelbase for better handling.

“The ambition was not to make an SUV, the off-road discussion, yes, you can go off-road but it wasn’t in the set of ambitions we set out to achieve.”

That’s why Ferrari opted to give the new model a naturally aspirated 6.5-litre V12 engine and a highly-advanced active suspension system in order to ensure it had sports car levels of performance.

Even the unique ‘welcome door’ layout, which features rear-hinged rear doors that operate independently from the front doors (unlike typical rear-hinged doors), has been chosen because it allows for a smaller rear door and therefore a shorter wheelbase for better handling.

The first (loyal) Australian Ferrari customers are due to begin receiving their Purosangue in the third quarter of 2023.

Keyword: Better looking than a Lamborghini Urus? Why Ferrari is no longer taking orders for its controversial new Purosangue 'SUV'

Lamborghini Huracan Tecnica. What does Lamborghini do for an encore after delivering the spectacular and extreme Huracan STO? They offer the Huracan Tecnica, which is in essence, an STO shorn of its wings and spoilers. The name Tecnica was used before on the little-known 2012 Gallardo Edition Tecnica, and ...

The Ferrari Testarossa was introduced at a grand event at the Lido de Paris cabaret in October 1984, while the public outing was at the Paris Auto Show where two vehicles were displayed, one gracing Ferrari’s stand and another at Pininfarina’s. The name Testarossa summoned the spirits from Ferrari’s glorious ...

Romain Grosjean has implied heavily that he is not planning to race full-time for Lamborghini Iron Lynx in the FIA World Endurance Championship next year. “This year I’ve done Daytona, I’m going to do Sebring, probably Petit Le Mans; next year the program includes those races plus Le Mans ...


View more: Grosjean implies he’s not planning to race in WEC next year