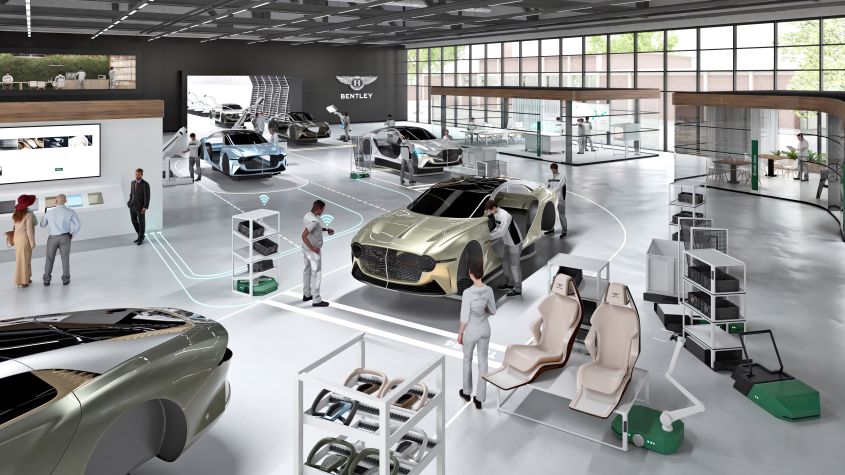 Bentley has revealed plans to invest £2.5 billion into the manufacturing of electric vehicles and a target of net-carbon neutrality by 2030. The investment will be used to renovate the Crewe production facility and produce its future electric models, the first of which is due in 2025.

Bentley currently employs 4,000 people at its Crewe plant, which will be developed into a ‘Dream Factory’ thanks to the investment. Certain processes will be digitised, more personalisation options will be offered to customers and sustainability on the shop floor and within the cars will be improved. The site is already carbon neutral, but now aims for net-zero environmental impact by 2030.

Bentley manufacturing boss Peter Bosch said: “We are already marking the pinnacle in luxury car production and have already transformed our factory to become carbon neutral, with industry-leading environmental credentials. With our new ‘Dream Factory’ concept, we now go to zero also with water, waste and other environmental impacts until 2030. Unique craftsmanship, customer interaction and employee experience will be enhanced by digital tech, higher flexibility and new ways of personalisation. ”

The overhauled facility will be used to produce Bentley’s future electric cars, with its first-ever EV set to arrive in 2025. The brand will become exclusively electric by 2030, and has already taken its first steps with hybrid versions of the Bentayga and Flying Spur. An electrified version of the flagship Continental GT is also in the works.

As part of its Beyond100 plans, Bentley aims to become end-to-end carbon neutral in eight years time, meaning that the process of building its cars will emit net-zero carbon emissions – thanks to the sustainable manufacturing plant.

“Beyond100 is the boldest plan in Bentley’s illustrious history, and in the luxury segment”, said Bentley CEO Arian Hallmark. “It’s an ambitious and credible roadmap to carbon neutrality of our total business system, including the shift to 100 per cent BEV in just eight years.”

Is something as opulent and luxurious as this really good for the environment?


View more: Bentley tries to sell us a 2.5-ton luxury SUV as ‘sustainable’

Bentley expects its Bentayga SUV to keep carrying the brand’s profits, with a long wheelbase version on the way. Bentley has overnight touted its enviable financial position, posting its best third quarter profits yet, while also announcing increased sales in regions across the world. The British marque, based in ...

Everything is just fine… There are those who would try convincing everyone that crime in the United States, and other countries, just isn’t out of control. However, cases like this high-profile theft of a Bentley in Miami help to highlight a problem that’s all too common. It helps that the ...

California’s Monterey peninsula has a penchant for the theatrical. Each morning cloaking itself in a thick shawl of sea mist that rolls in off the Pacific, then whipping it off around 9am to reveal a Hollywood set on 17-Mile Drive – immaculate fairways on the Spanish Bay links tumbling down ...

Bentley Performance Cars Drag Race It’s a slugfest between four generations of Bentleys, including one that’s 93 years old. Beyond its connection to Rolls-Royce, Bentley cars these days are known for luxurious and posh motoring. However, the company’s century-old history came with performance machines as well, most notably so ...


View more: Bentley Performance Cars Line Up For The Most Expensive Drag Race Ever

If you were to draw a Venn diagram of Bentley owners and yacht owners, we’d wager that the overlap between the two is probably pretty significant. So it comes as no surprise that Bentley has now unveiled a new special Mulliner Riviera Collection for the Continental GT Convertible, which ...