It appears someone at Tesla really put this Cybertruck prototype through the paces. Perhaps there's footage? 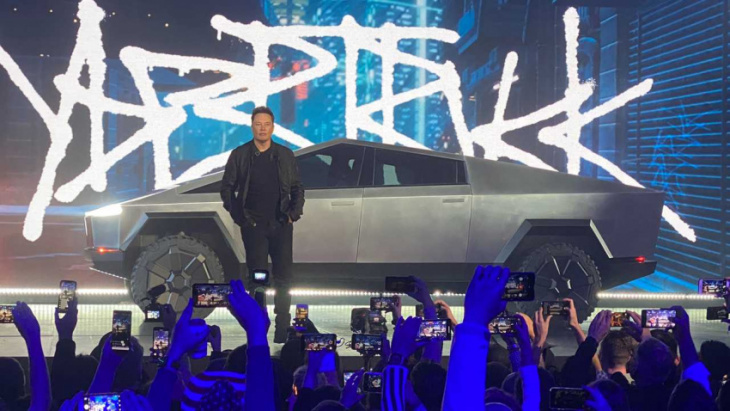 As you may have seen on social media, an updated Tesla Cybertruck prototype was spotted on a semi-truck trailer, and sadly, not a Tesla Semi. The massive electric truck appears to have just come from having a bit of fun, and it may be heading out for another does. However, aside from its beat-up condition, people quickly took interest in the equipment that’s been placed on the truck.

Tesla owner, Tesla FSD Beta tester, and social media influencer Whole Mars Catalog (@WholeMarsBlog) took to Twitter to share the image of the Cybertruck prototype. He spotted it on a trailer as Tesla was unloading it. Not long after Whole Mars shared the image, others in the Tesla community began sharing it and talking about the cameras and/or sensors mounted on the electric pickup truck prototype.

We’ve seen sightings of Tesla’s vehicles out testing with various cameras and or mapping systems, as well as what appears to be Lidar. However, in this case, it’s not on the top of the truck, and it’s much more obvious than some at least of the equipment in other cases. In fact, as you can see, there are rather large contraptions on the Cybertruck’s frunk lid.

According to Teslarati, the Cybertruck prototype in the photo was actually found to have many sensors, and it appears they may be used for calibrating the truck’s cameras. At this point, it’s only speculation, but the word in the Tesla community is that Tesla is likely still making decisions on the Cybertruck’s camera placement.

Tesla has specific areas where it mounts cameras on its vehicles, but the Cybertruck doesn’t follow the design cues found on any other Tesla vehicle. Moreover, it’s made of a completely different material, it’s much larger, and almost any hardware placed on the EV is going to be very obvious unless Tesla is especially creative. Think of the concerns with the Cybertruck’s massive windshield wiper.

The fact that it appears Tesla has been really putting this particular Cybertruck through the paces also begs other questions. As you can see, the truck is a mess, so perhaps it was off-road testing day. However, Tesla could have been recording footage for an upcoming video, it could have been testing the cameras and/or sensors capability in tough conditions, or it could simply be working on any other number of vehicle or camera calibrations.

Hopefully, we’ll find out what Tesla is up to sooner rather than later. In the meantime, leave us your best guesses in the comment section below.

The Tesla Semi is reportedly about to ship, and Tesla has been making sure people see it as often as possible.

Recent reports have indicated that another Twitter whistleblower may consider giving a testimony when Elon Musk faces the social media company in court over his $44 billion acquisition bid later this month. The 2nd whistleblower may have some notable things to disclose about Twitter’s bots and spam accounts as ...

PARIS: Elon Musk is at it again – his tweets are causing a furore. In a series of tweets, Musk suggested that the Tesla Cybertruck, the US carmaker’s first electric pickup, will be able to travel short distances on water. This would make it the first amphibious electric production ...

Elon Musk said it, not us Tesla Cybertruck to be launched in 2023 The Tesla Cybertruck has been in the dark for quite some time, but the latest Tweet from Elon Musk has certainly raised its interest. Being one of the most highly-anticipated EVs awaiting its official launch (which ...


View more: Tesla Cybertruck To 'Serve Briefly As A Boat'?

SpaceX is on the cusp of launching three Falcon 9 rockets in a handful of days. Minor issues with two of the three missions, however, have complicated the already hard process of coordinating so many launches at the same time. For many reasons, rocket launches are an inherently difficult ...


View more: SpaceX on track for three launches from three pads in one week

Model Y. Source: Tesla The latest data from Europe’s passenger car market for August shows electrified vehicles make up 20% of all new car sales, despite continued struggles across all segments. Leading the way for EV car sales was the Tesla Model Y, with 7,011 for the month of ...