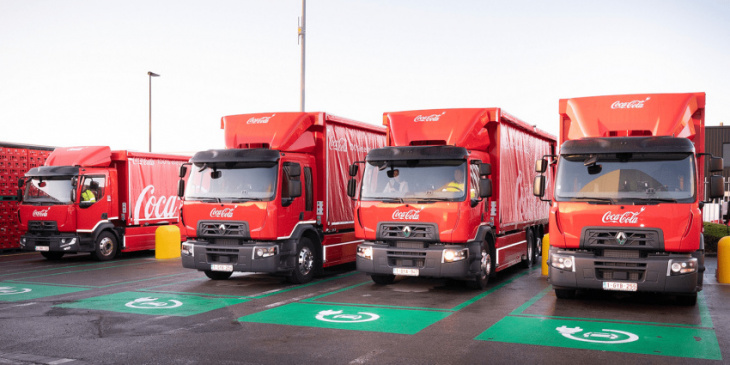 Coca-Cola Europacific Partners (CCEP) is starting to use electric trucks in Belgium for last-mile deliveries to customers. The company has ordered 30 e-trucks from Renault Trucks, the first five of which will begin operating immediately in and around Antwerp.

Coca-Cola has opted for the Renault Trucks D E-Tech and D Wide E-Tech models, Renault’s zero-emission solutions for 16 and 26-ton logistics. The remaining 25 electric trucks will arrive at Coca-Cola’s production and distribution sites in Ghent and Chaudfontaine over the coming months. Once Renault Trucks completes deliveries, the CCEP fleet will be one-fifth electric.

“Investing in electric trucks will allow Coca-Cola Europacific Partners to cut CO2 emissions by 30% across the entire value chain by 2030 and become climate neutral by 2040,” said An Vermeulen, VP & Country Director of Coca-Cola for Belgium and Luxembourg.

The current investment is seven million euros, and the switch to electric vehicles made “perfect sense,” so the executive. “Most of our deliveries are very local, to supermarkets and businesses near our sites, with routes averaging 150 km per day,” explains An Vermeulen.

Coca-Cola chose a configuration to cover 200 km daily, working closely with Renault Trucks, saying the range is more than enough for 40% of CCEP’s current routes. Each truck has an on-site charging station to recharge the battery overnight fully. These charging stations are powered by 100% green energy generated at the site.

The trucks also feature 360° camera systems to eliminate blind spots, a loudspeaker to warn pedestrians and cyclists, and a transparent door for optimal visibility on the passenger side.

The 30 electric trucks being rolled out this year are just a first step for CCEP. “We will keep taking steps to decarbonise our fleet until 2030 while continuing to study market developments to determine the future of our fleets by considering parameters such as covering longer distances, vehicle autonomy, and heavier loads,” added An Vermeulen.

As for Renault Trucks, the company only this week opened the order books for its heaviest zero-emission models yet. The 44-t Renault E-Tech T and E-Tech C will roll off the production line in Bourg-en-Bresse, France, from the end of 2023.

Keyword: BE: Coca-Cola opts for zero-emission solutions from Renault Trucks

A model of Airbus A350-1000 jetliner at 2021 Airshow China. — Reuters PARIS: European planemaker Airbus announced today a partnership with French carmaker Renault to develop a new generation of electric batteries for cars and planes. Engineering teams from both companies will join forces to mature technologies related to ...

Airbus and Renault Group have signed a research and development agreement to combine their respective competencies to develop better batteries for electric cars and hybrid electric aircraft. This will focus on optimising energy management and reducing battery weight, according to the announcements. In addition, the partners want to look ...

Ahead of the first deliveries arriving soon, the 2023 Renault Koleos has gone on sale in Australia armed with new equipment across the range, a new mid-spec Zen 4×4 trim and styling tweaks like new 18-inch alloy wheels. Prices are up by $2,900, but that’s offset by the new ...