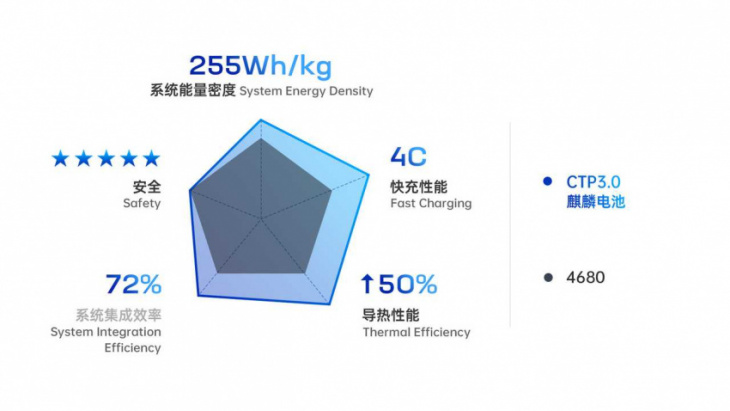 As electric vehicles become more integral in various regions, related technologies also continue to advance. Batteries, in particular, are a constant source of concern. In 2022, range anxiety is still a real thing—although it has definitely been improving, particularly on the car and truck side of the equation.

Lithium-ion batteries are currently the standard, although researchers are also investigating other potential technologies, including zinc-bromine and aluminum-sulfur batteries. As the current largest lithium-ion EV battery producer in the world, Contemporary Amperex Technology Company Limited (CATL) clearly has an interest in improving its bread and butter, lithium-ion battery tech.

That’s why, over the summer of 2022, it introduced its CTP 3.0 lithium-ion battery technology, called Qilin. Thanks to advances across multiple areas including energy density, thermal cooling efficiency, and stability, CATL claims that Qilin boasts some impressive numbers. Energy density, the company says, is up to 255 watt-hours per kilogram. This battery is currently in use in a Chinese-market EV, the Zeekr 001 (produced by Geely), which boasts a claimed 1,000-kilometer range (just over 621 miles) on a single charge.

Furthermore, assuming the local charging infrastructure is up to the task, CATL also claims this battery can go from 10 percent to 80 percent fully charged in just 10 minutes, utilizing fast charging. As we’ve noted many times before, a company can say what it likes—what happens in the real world, in the hands of real people, will be the true test of such claims.

Currently, CATL’s Qilin batteries aren’t expected to be available until sometime in 2023, which is when the company currently plans to mass-produce them. It’s not clear whether this technology may find its way into electric motorbikes. However, given the rise of electric motorbikes (mostly scooters, some not) in markets outside of North America, it won’t be surprising if and when it does.

The packaging may, of course, differ, and the range will obviously be different since there’s far less space to stuff batteries into when packaging them for motorbikes. However, that’s exactly why such impressive density (assuming the actual numbers are close to being accurate) could be an important step forward for two-wheeled EVs.

Keyword: Battery Producer Says It's Made The Most Energy-Dense Li-Ion Battery Yet