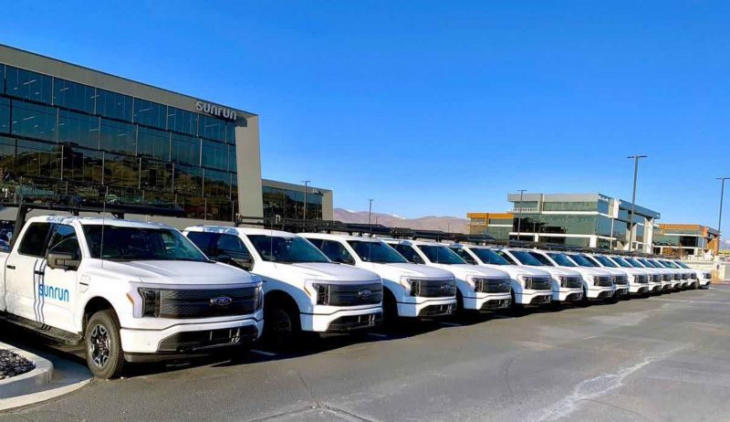 Major US solar installer SunRun has received delivery of 15 F-150 Lightning “pick-ups” from fellow US giant, Ford, in the latest demonstration of the popularity of the all-electric ute – and the latest sign Australia might be waiting a while to see them on local roads.

SunRun tweeted this week that it is transitioning half of its vehicle fleet to electric or hybrid vehicles by the end of 2025, including a bunch of the Ford’s all-electric utility vehicle.

“We’re committed to decreasing transportation emissions by transitioning half of Sunrun’s vehicle fleet to electric or hybrid by the end of ’25,” the tweet said.

“That transition is well underway with the addition of our new fleet of electric Ford F150Lightning’s rolling out across the country.”

The F-150 Lightning offers a range of 240 miles (386km) and up to 3,400 kilos of towing capacity. Like many EVs, the ute is in such high demand in the US that the current model year is no longer available for retail order.

Soaring domestic demand for the F-150, and Ford’s other electric vehicles, drove a welcome rise in value for the century-old company in the last quarter, according to Bloomberg.

Meanwhile, in Australia, demand for EVs is outpacing supply, leaving aspiring Australian EV drivers high and dry: back in April of this year, Tesla Model 3 wait times hit a staggering nine to 12 months in Australia. And demand for electric utes remains almost completely unfulfilled as other more well developed EV markets are prioritised.

As SunRun points out in another Tweet, electric utes like the F-150 offer benefits beyond the reduction of emissions, including using its “battery on wheels” as a back-up power source for the home.

In May of this year, Ford set the price for a comprehensive F-150 Lightning vehicle-to-home energy system, in case of power outages.

The system consists of an inverter, a transfer switch, and a battery, meaning the system can disconnect from the utility line during a power outage and switch over to Ford Intelligent Backup Power, with the truck sending power directly to the house.

Increased blackouts are likely to be a necessary component of the transitional phase in some jurisdictions, as grids move to 100% renewable energy – although they don’t need to be, with nations like Germany generating a major portion of their electricity from renewable sources with no discernible decline in electricity reliability.