The BMW has more power, but the Audi is lighter. 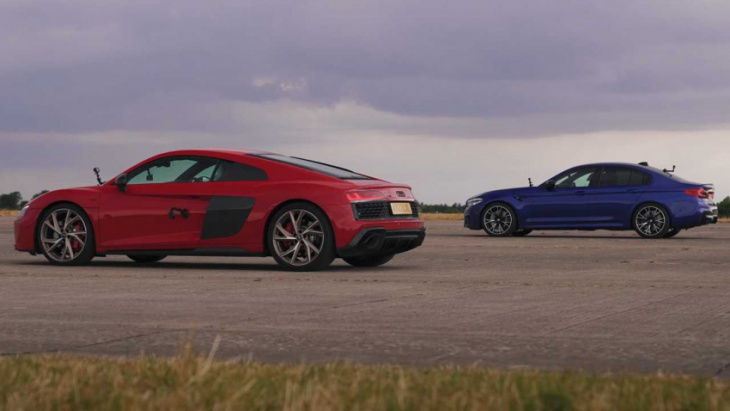 A new drag racing video pits an unlikely pair against each other – the BMW M5 Competition and the Audi R8 RWD. The two couldn’t be more different, but do those differences reveal themselves on the track? A new video from the Carwow YouTube channel finds out.

There’s a big difference between how the two produce their power. The BMW packs the brand’s twin-turbocharged 4.4-liter V8, which pumps out 625 horsepower (466 kilowatts) and 553 pound-feet (750 Newton-meters) of torque. The engine in the M5 pairs with an eight-speed automatic transmission with launch control, sending power to all four wheels.

The first race reveals that while the Audi is lighter, the BMW’s all-wheel drive and the extra power make it a formidable opponent. The BMW jumps from the starting line, getting a sizable lead over the Audi that the R8 can’t overcome before the finish line. However, things are different for the next two as the Audi gets a much better start, keeping up with the BMW and passing it just before the finish line, beating it twice by about half a car length even though both returned an 11.3-second quarter-mile time.

The pair split the two rolling races, with the Audi winning the first one with both cars in their comfiest setting. The second race set both in their sportiest tune, and the BMW won. The final brake test is a big surprise, with the heavier BMW performing better, stopping at a shorter distance than the Audi.

The two German cars in the video show the many ways to make a performance vehicle. They serve wildly different customers, and there’s a big price difference between them, but those differences disappear in a drag race.

It’s difficult to put the feeling in words but it’s not every day that you look down at the speedometer & realise that you are going over 210 km/h. BHPian animeshc recently shared this with other enthusiasts. This is by all means a noob’s perspective of his first track ...


View more: Audi Experience at BIC: Two of the most fascinating hours of my life

They say that If you want to figure out what a carmaker is truly capable of, you simply take a peek into their line of flagship vehicles for some clues.  Traditionally Modern Visuals A Mobile Presidential Suite A Suave Bahnstormer The Pinnacle of Luxury They say that If you ...

It clears the cones at an impressive 79 km/h.


View more: I Drove a Real-Life BMW M2 on a Virtual Racetrack and Survived