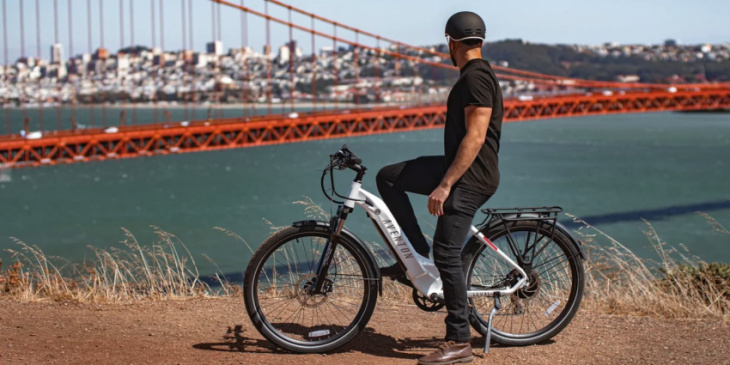 Aventon has been updating all of the brand’s popular electric bicycles to includeupgraded features like improved frames, built-in LED lighting, and full-color displays that feature Bluetooth connectivity.Now the Level is getting the upgrades with the release of the Aventon Level.2 commuter e-bike.

When I first reviewed the original Aventon Level nearly two years ago, my summary was basically “please, take my money!” Now that we have the new Aventon Level.2, the bike is even better and more commuter-ready than ever.

I have had the chance to spend the last few weeks testing out the new e-bike ahead of its launch. I’ve got a full review coming up shortly, complete with a video of my testing experience. Look for that in the next few days.

A major new update to the bike includes how the motor is activated. The bike is powered by a 500W continuous-rated rear hub motor that helps it get up to 20 mph (32 km/h) under throttle control or 28 mph (45 km/h) with pedal assist.

Speaking of pedal assist, it’s better than ever thanks to the inclusion of a new torque sensor. A torque sensor, unlike the lower cost cadence sensors, measure how hard you’re pedaling instead of how fast you’re pedaling. That allows the bike to provide much more responsive and intuitive pedal assist that better mimics your own power delivery.

The inclusion of an eight-speed drivetrain makes that pedaling even nicer and lets riders dial in the best gear ratio for their speed and terrain.

A frame-integrated 48V and 14Ah battery offers 672 of Wh. With modest pedal assist, riders should be able to squeeze a solid 40 miles (64 km) or so from that battery. Riding around on throttle will drain the battery faster, but a reasonable 25 miles (40 km) is still likely within reason.

The battery on the Aventon Level.2 is lockable within the frame but removable for charging off of the bike if riders need to leave the bike locked outside.

That frame features Aventon’s signature smooth welds, making it a rolling piece of art that I wish other manufacturers would better imitate. It’s rare to see such nice-looking manufacturing at this price point.

And, speaking of frame-integrations, check out those tail lights. Just like on Aventon’s other popular electric bikes, the company brought the tail lights right into the seat stays on the rear of the frame. That means you get good visibility from the rear and side angles at night. The front head light is handlebar mounted, allowing it to turn with the bars as you steer around a corner.

A pair of hydraulic disc brakes offer powerful stopping with a maintenance-free design. Unlike mechanical cable disc brakes, hydraulic brakes basically stay in tune until the pads finally wear out. Depending how much you ride (and brake), it could be a year before you eventually need to perform maintenance and have the pads replaced.

The Aventon Level.2 rolls on 27.5 x 2.1″ tires, and the bike comes equipped with a full fender package to prevent them from throwing water and mud all over you. A rear rack adorns the back, ready for commuters to strap on their panniers or an extra cargo box for carrying gear.

Priced at $1,949, the new Aventon Level.2 is now available on Aventon’s website.