The Abu Dhabi Desert Challenge in the UAE is the next test for the range-extended EV. 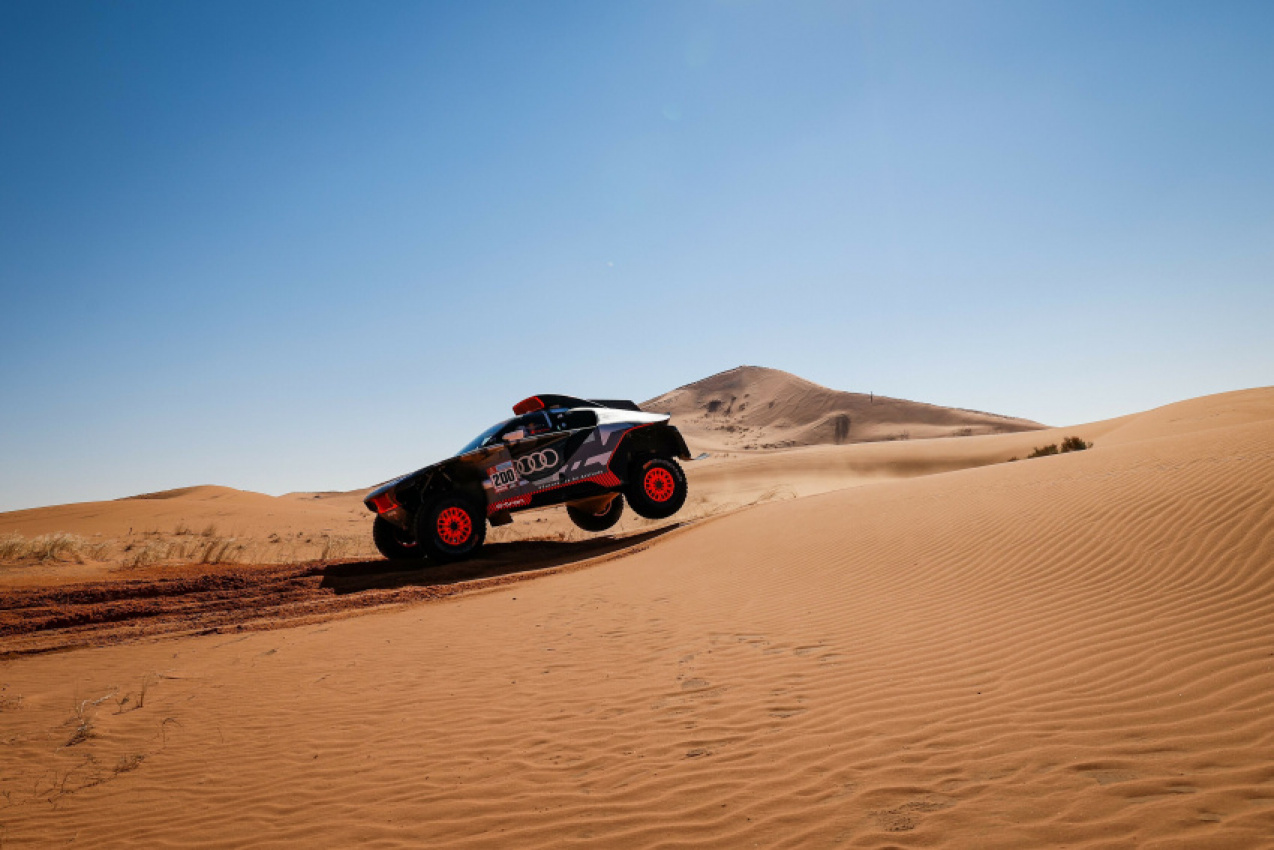 Following a debut in Dakar earlier this year, Audi is taking its RS Q e-tron to the Abu Dhabi Desert Challenge, which began this week. The range-extended EV’s rally debut in Saudi Arabia in January offered plenty of drama in a record amount of time, and none of it had to do with its battery-electric drivetrain.

In January the RS Q e-tron piloted by Stephane Peterhansel suffered major damage to the suspension after hitting a rock in the opening days of Dakar. A support truck was nowhere in sight and could not reach the team fast enough, which resulted in hours of the rally being lost.

To make matters worse, the second RS Q e-tron in the rally, piloted by Carlos Sainz, had itself gotten lost on the same day. The two mishaps effectively knocked Audi out of contention in this year’s Dakar, even though at the time Peterhansel was actually running in second place.

The Abu Dhabi Desert Challenge in the UAE will give Audi a chance to salvage the start of the year and the RS Q e-tron’s potential, with Team Audi Sport entering one car with Peterhansel and Edouard Boulanger in the second round of the FIA World Rally-Raid Championship.

Just over the border from Saudi Arabia, the team will face a similar mix of terrain and temperatures over the five stages of the event in the Al Dhafra region. It will also be a shorter rally, Audi notes, with the daily stages ranging from 134 miles to 197 miles, with the entire rally spanning 1201 miles. 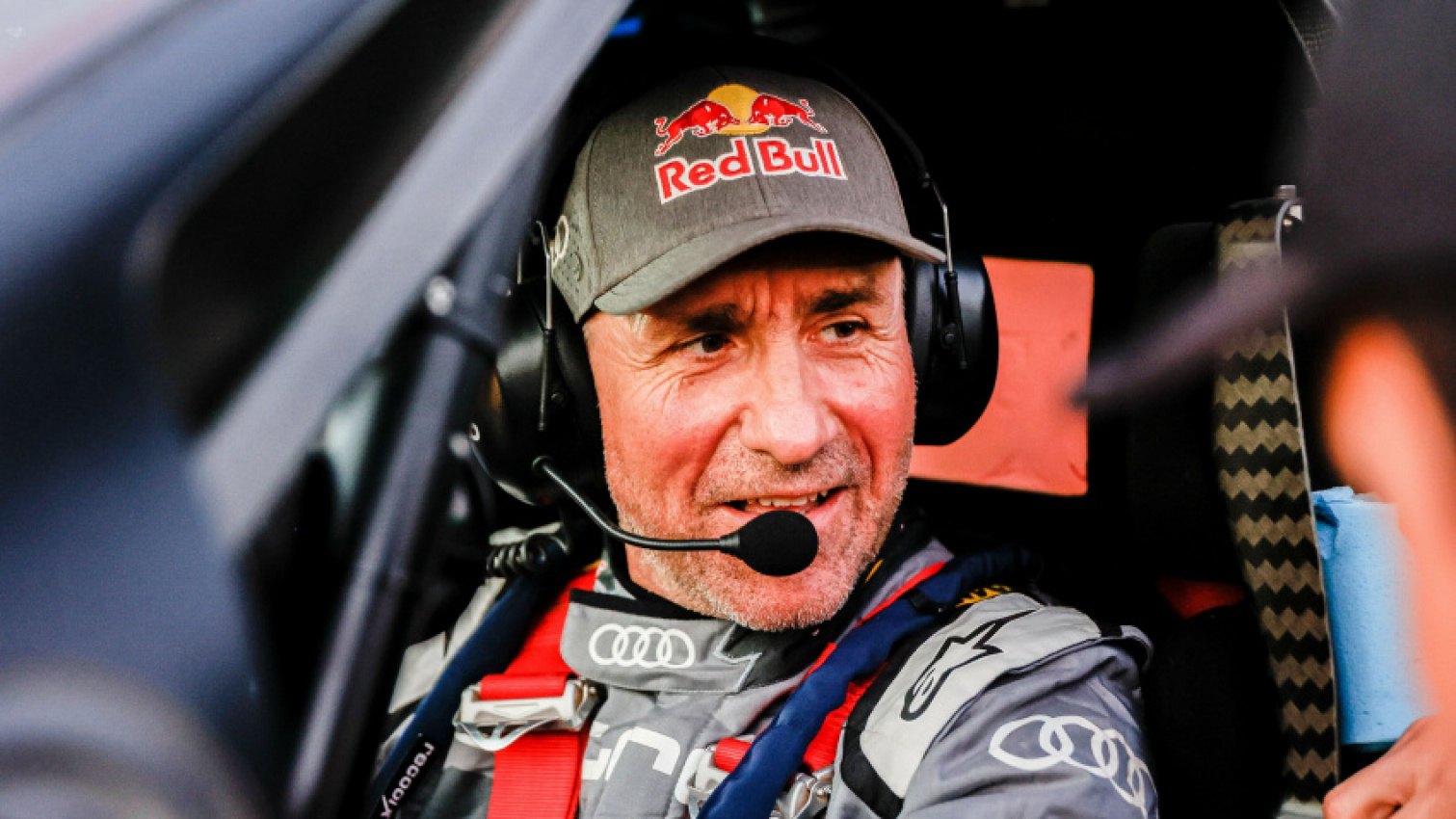 Peterhansel gets ready for the second outing of the RS Q e-tron, having won this event seven times.

“Experience shows that around 80% of the route of this rally is in large dune mountains—the remaining 20% on flatter sandy ground without any tracks,” said Peterhansel, who has won here six times in the past 20 years. “At the Dakar, there were at most 60 kilometers of dunes at a stretch. Likewise, the heat is higher now than in January.”

As a result, Team Audi Sport and Q Motorsport expect conditions to present different issues than in Saudi Arabia, starting with higher energy consumption due to much longer dune stages, where the sand will be warmer and softer. The team will also have to contend with higher overall temperatures in Abu Dhabi this time of year, which will put stress and greater energy demands on the vehicle’s cooling systems.

“Our energy systems performed very well in January. The tasks in Abu Dhabi are a clear increase,” Peterhansel added. “The dune crests are the most difficult: If you drive too slowly, you lose time or get stuck. If you’re too fast, you risk jumping into the unknown. With conventional rally cars, you always have to decide on a gear and can make a mistake. The continuously variable drive of the Audi RS Q e-tron on the other hand is perfect, as is the high torque.” 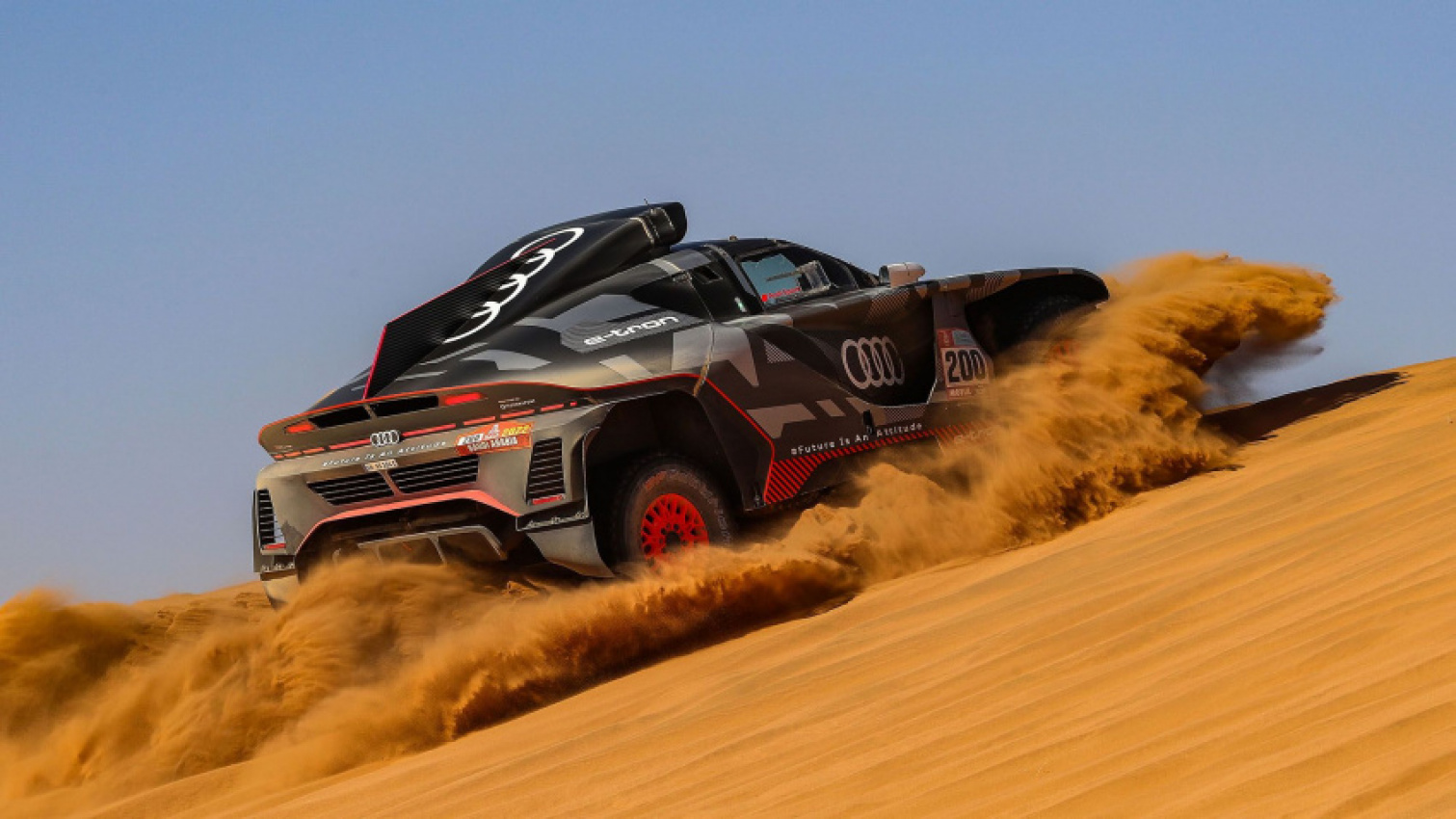 Softer sand and higher temperatures are expecting in Abu Dhabi this week.

The RS Q e-tron is powered by a 50-kW battery paired with a 2.0-liter Audi TFSI inline four-cylinder engine and three electric motors, making it a range-extended EV by definition, rated at 671 hp in Dakar spec.

The prototype has one motor-generator unit (MGU) at each axle borrowed from the Audi e-tron FE07 Formula E car with very few changes, with a third MGU for the energy converter that charges the battery itself. The main battery is hefty, weighing 815 pounds, but the tradeoff is that there is no transmission or its weight to worry about.

If there is one silver lining with the terrain in the UAE event, it’s that navigation is expected to be easier. Peterhansel and Boulanger will also be driving the same car—chassis number 104—they drove in Dakar just a couple of months prior.

“We had a trouble-free second Dakar week in which we were able to set some nice highlights,” Peterhansel added. “Now we want to try and clinch our first podium result.”

The finale is limited to 333 individually numbered cars.

First Look Audi’s R8 successor will be all-electric, so the V10’s going out with a bang (and a wing) This is the Audi R8 V10 GT RWD, and it’s more momentous than it may appear. This is not just a powered-up, slightly lighter special edition R8. This is Audi’s final ...

First Look And the £87k limited edition will be one of the rarest cars in Britain This is the new Audi TT RS ‘iconic edition’, a turbocharged coupe that apparently celebrates one of Audi’s finest ever designs and its ‘less is more’ philosophy. Which of course explains why the new ...


View more: The Audi TT RS ‘iconic edition’ is a five-cylinder celebration of the TT

Audi has made the model more powerful since its introduction.

The 2023 Audi Q4 E-Tron gives the German luxury brand an all-electric entry in the popular compact crossover segment, making EV Audis accessible at prices of $50,000 and up. The brand’s large E-Tron SUVs and E-Tron GT sedan started at more than $70,000 and $105,000 respectively, and have sold ...

The practical, stylish crossover EV lacks a little in the performance department but offers a luxuriously comfortable cabin and storage galore.

Campaign runs from 1 October – 31 December 2022 Quality improvements for aftersales services Audi Malaysia announces their #ReadyToDrive initiative, which gives Audi owners an opportunity to take advantage of a value-for-money service package. PHS Automotive Malaysia (PHSAM), the official distributor of the Audi brand in the country has announced ...

Since taking over the Audi brand’s representation in Malaysia back in July 2022, PHS Automotive Malaysia (PHSAM) is looking to improve the customer experience and has put into gear its #ReadyToDrive initiative with a focus on safety, reliability and peace of mind for Audi owners. “Customer satisfaction is very ...