Why is the Audi R8 leaving us?

Because like most carmakers, Audi has committed its future – its entire survival – to building electric cars. Even its resident supercar can’t escape the inevitable. Whatever replaces the R8 as Audi Sport’s speed merchant flagship – the very epitome of Vorsprung Durch Technik – will wear an e-tron badge, with a heap of battery cells and electricity beneath.

That means a mere 16 years after the original V8 R8 became Audi’s first mid-engined road car, you’re now looking at the last one. It’s called the R8 GT and no, you can’t buy one.

Every last one of the 333 hard-tops Audi will build has a buyer. Perhaps it’ll come over all generous and also build some drop-top Spyders like it did with the old R8 GT, which was the final version of the first-gen R8.

The recipe seems to have stayed pretty much the same. Front flicks, big rear wing, some token lightweighting and a chunky price. Audi hasn’t yet confirmed exact numbers, but it’s certain to be the first R8 to have a six-figure price beginning with a ‘2’. It’s come a long way from those Porsche 911-rivalling daily supercar roots.

Audi says that the sticky-up bits (our words not theirs) together with the extended splitter and taller diffuser generate 300kg of downforce. Sounds like loads, until you delve into the small print and discover that impressive aero load is only achieved at the 199mph v-max. Turned into many corners at two hundred lately, have you?

Not often. So is the GT just an R8 with a body kit?

It seems dangerously close to that, unless you get ticky with the options list.

As standard, there’s a carbon fibre front anti-roll bar. This, together with forged wheels, saves 20kg. You get standard carbon-ceramic brakes, plus plenty of R8 GT badges on the back, the side sills, the floor mats, the seats…

In fact, let’s latch onto the seats. The regular R8 GT’s chairs are not very special. You can have more purposeful bucket seats, but they are an optional extra. So is the 18-way adjustable coilover suspension with a 10mm ride height drop. As is a fixed ratio steering rack, instead of Audi’s ‘dynamic’ speed-sensitive set-up.

So the R8 GT is a confusing car. It’s a run-out hardcore special. The YOLO Edition. The R8 unleashed… but Audi has rowed back from making it as focused as it could have.

But it’s got a load more power right? A proper send off for the big-hearted V10?

Nein. The naturally aspirated 5.2-litre powerhaus beneath that sloping back window generates 612bhp, which is the same as you get in the R8 Performance Quattro. While the R8 GT is the most powerful rear-wheel drive Audi supercar yet, it’s lacking a headline bump in the engine room. 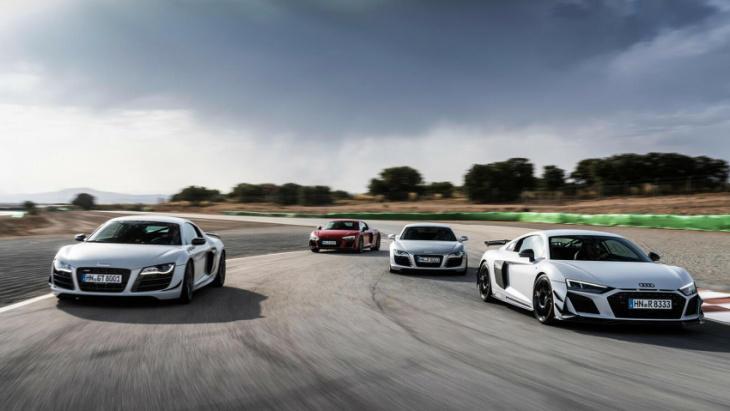 A missed opportunity? A pulled punch? Seems a shame to us not to give the V10 a more glorious send-off, but even in this familiar state of tune it’s one of the world’s great powerplants. Rich in tone and soul, with sharp throttle response, bottomless reserves of torque and a frenetic top end laced with the baleful sonics that only a V10 can offer. It’s glorious, and one final reminder that power isn’t everything after all. A 600bhp-ish V10 is more memorable than a downsized twin-turbo engine with twice as much poke.

Still, this run-out special seems lacking in a headline feature…

Audi Sport says its priority wasn’t to send the R8 off to retirement by making it fast, but turning up the fun. Which is why we have a new knob to play with.

Nestled in the nether regions of the steering wheel is a chequered flag button. Push it and the R8 GT enters Performance mode, with no automatic upshifts, and the stability control put on notice. Now twizzle the knurled surface of said knob. This engages the R8 GT’s Torque Rear mode, which is essentially a seven-stage traction control system allowing you to choose how sideways the car gets before the computers attempt a rescue mission.

Now Audi’s decision to make this GT rear-wheel drive (unlike the previous version) makes sense. It’s a hooligan. An absolute yob. 612bhp to the back tyres, and seven levels of assistance to butt up against while you find out if you’re as handy as you think you are. Good luck. 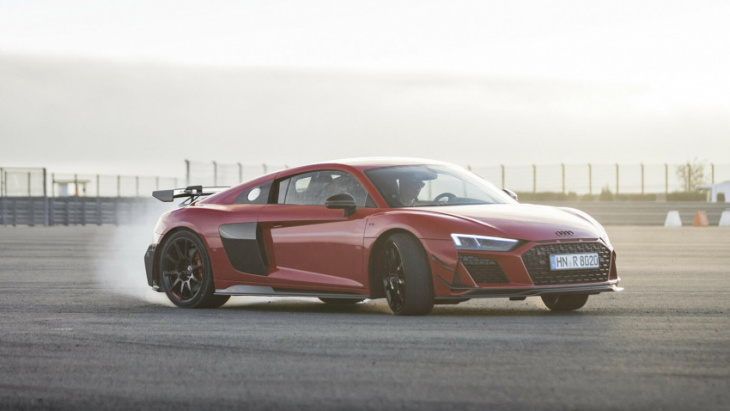 Does it make you feel like an invincible superhero?

It’s ultimately not as clever a gadget as Ferrari’s freakish Side Slip Angle Control, which debuted on the 458 Speciale and has been getting craftier ever since. In a Ferrari, the interventions are invisible, so it feels like the huge crowd-pleasing powerslide you’ve just executed was all ‘you’. You never sense the guardian angel of electronics cupping your ego, walking a coded tightrope millimetres from disaster.

In the R8 GT, you feel your binary fairy godmother trimming the rough edges off your lack of talent through the seat of your pants, and smell the overworked rear brakes when you stagger out after a few laps. Yes, laps. Of course this is for track use only. You wouldn’t dream of using it on the road, would you?

It’s still a hugely impressive party piece, and does make unsticking the R8’s sticky (optional) Cup tyres less intimidating. You’re quickly aware that big ol’ V10 is a hefty lump and once it starts to rotate, you can’t be lazy in catching it. In the wet, it’s still possible to pirouette in at Level 3 on the safety-newt-o-matic. Whoops.

This sense of digitally-augmented fun will upset some purists, but I like that the R8’s swansong is more about naughtiness than lap times or raw pace. Hopefully this – and the skiddable new RS3 – are a harbinger of things to come from Audi Sport’s electric era.

Anything else worthy of note?

The revamped gearbox is as good as life gets when you’re shifting cogs with paddles. Wow it’s fast, with lip-smackingly perfect blips on downchanges and upshifts so seamless the digi-rev counter can barely keep up.

It’s such a stellar transmission, you might forgive the R8 GT’s steering for lacking the detail than McLaren and Porsche wring from theirs. And the cheap’n’nasty plastic paddles.

Goodbye to the R8 then. Been quite a moment in Audi history, hasn’t it?

Undoubtedly one of Audi’s most important cars, the R8. Not in terms of sales or profits, but in perceptions of the four rings. If you were still crawling and dribbling in 2006 when the first one landed, you’ll scarcely believe just what a datum point this was for Audi, which had little answer for the decades of driver’s car excellence boasted by its AMG, BMW M and Porsche rivals.

Sure: Audi had the Quattro, it was dominating endurance racing and the RS4 was pretty great, but Audi was hardly the first marque that popped to mind when somebody fancied a pulse-raiser.

Then the R8 happened. A truly useable daily supercar that looked exotic, sounded fabulous, handled like a big Cayman with Lotus damping and had interior build quality to make a Ferrari F430 quiver with jealousy. It did exactly the job a halo car is supposed to: shining its radiant glow over all the products in the range.

It’s tricky to quantify exactly, but without the R8, do you think that quite as many people would’ve desired an A1 or a Q3 over the past decade and a half? For a generation or two born too late for Group B rallying or Ronin’s car chases, this is the car that established Audi on the car world map. And now it’s dying, which is sad. But at least it’s taking as many tyres as it can with it into the afterlife. 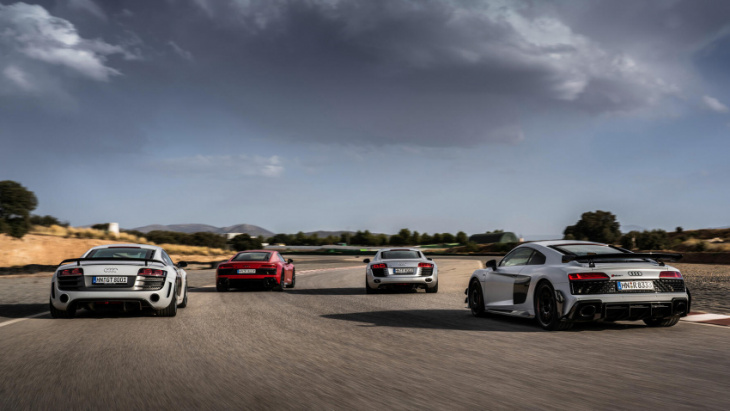