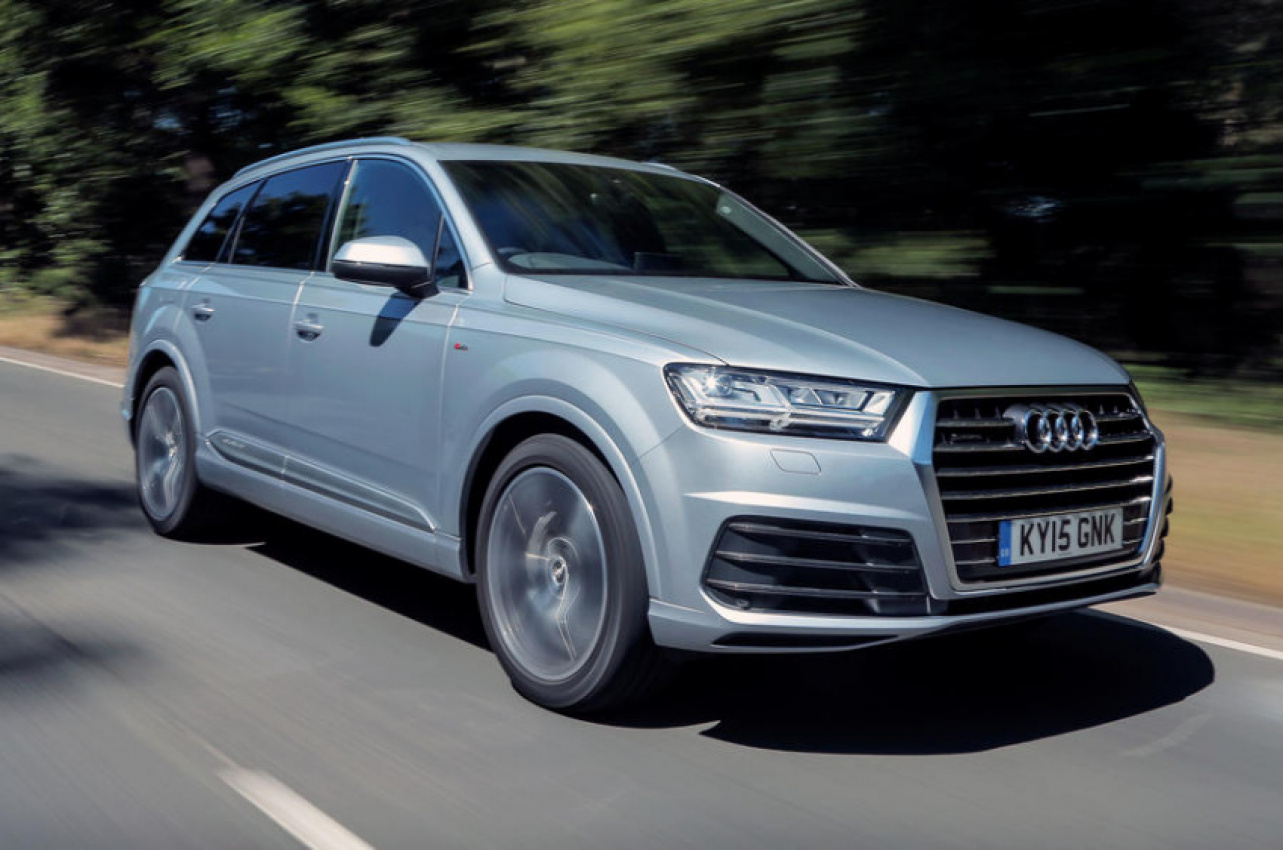 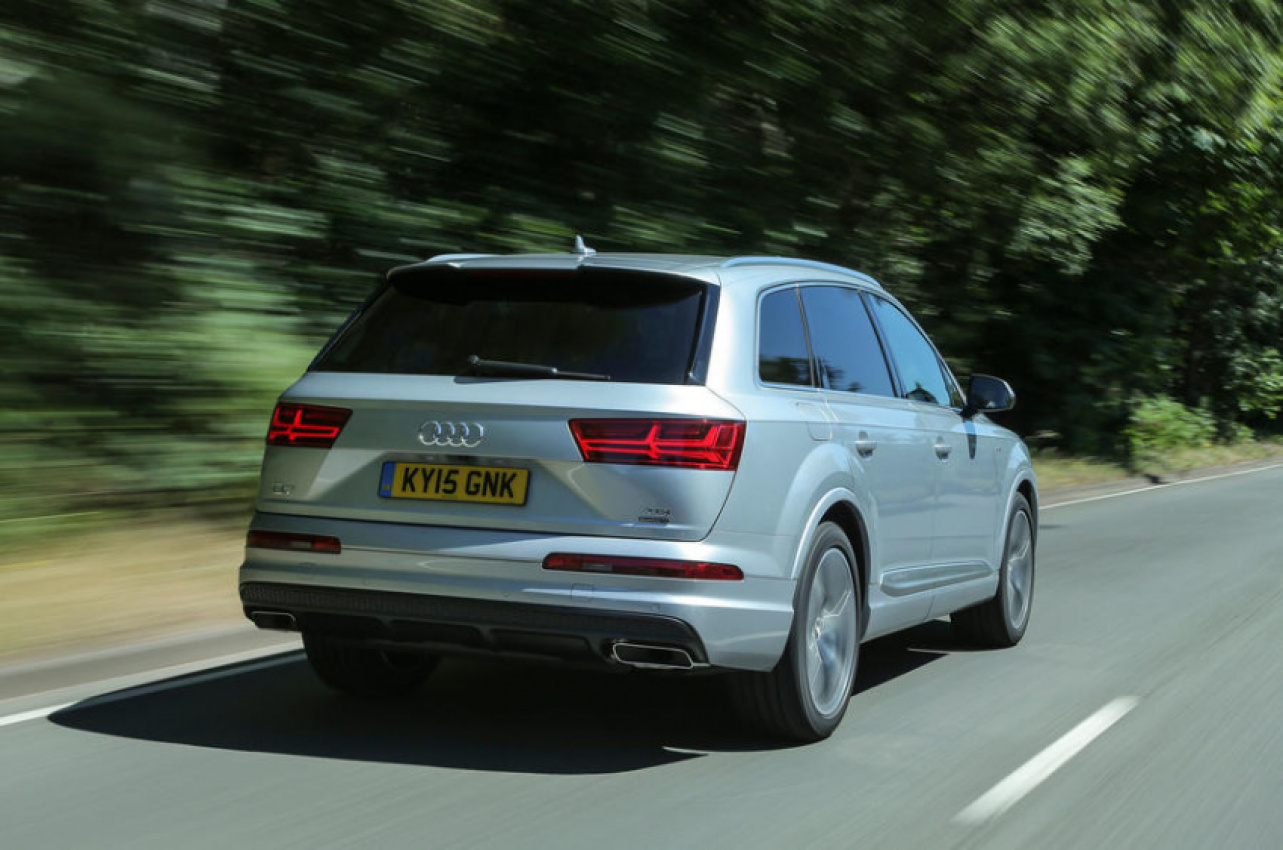 The second-generation Audi Q7 is 300kg lighter than its predecessor 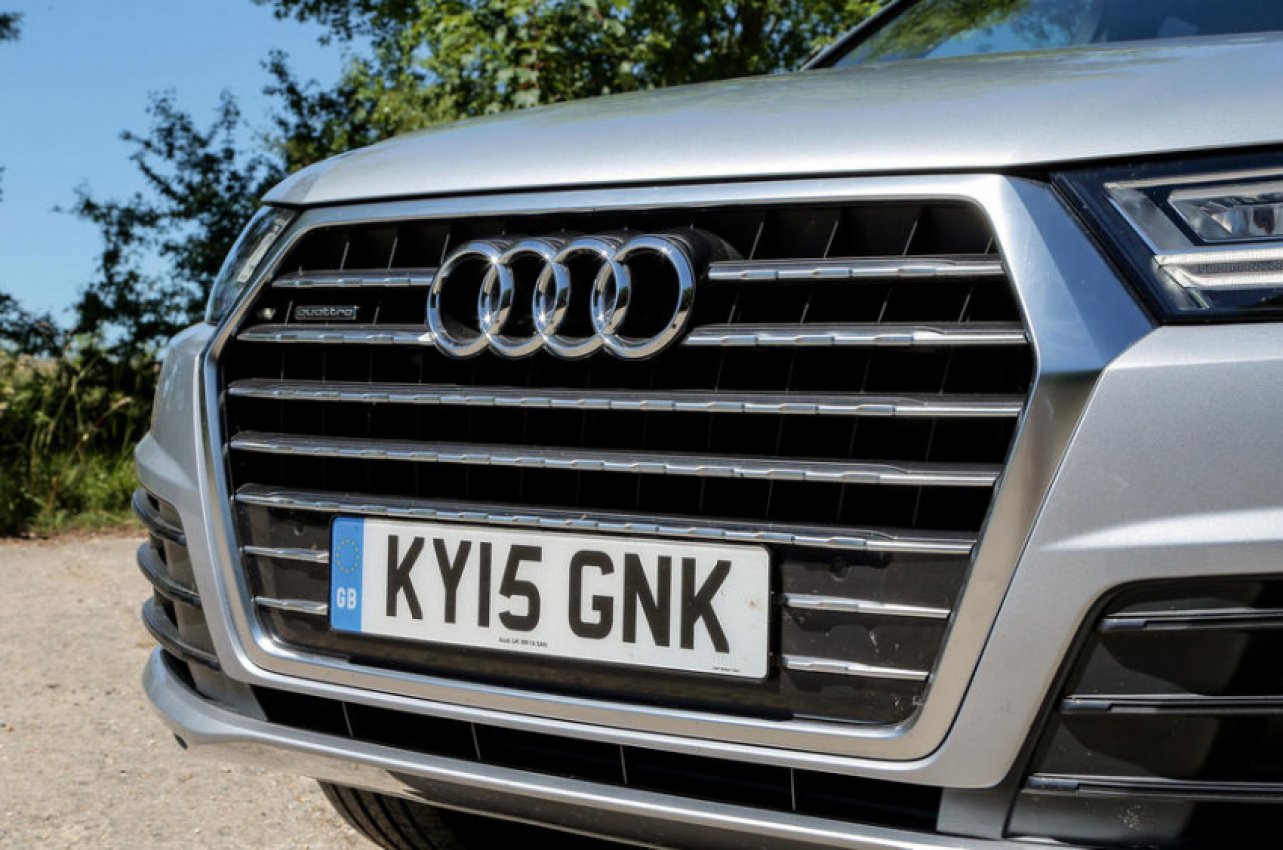 Enlarged, extra-chromey single-frame grille is one of Audi’s latest design features. It looks like it’s machined-from-billet aluminium — but it couldn’t be, for pedestrian protection 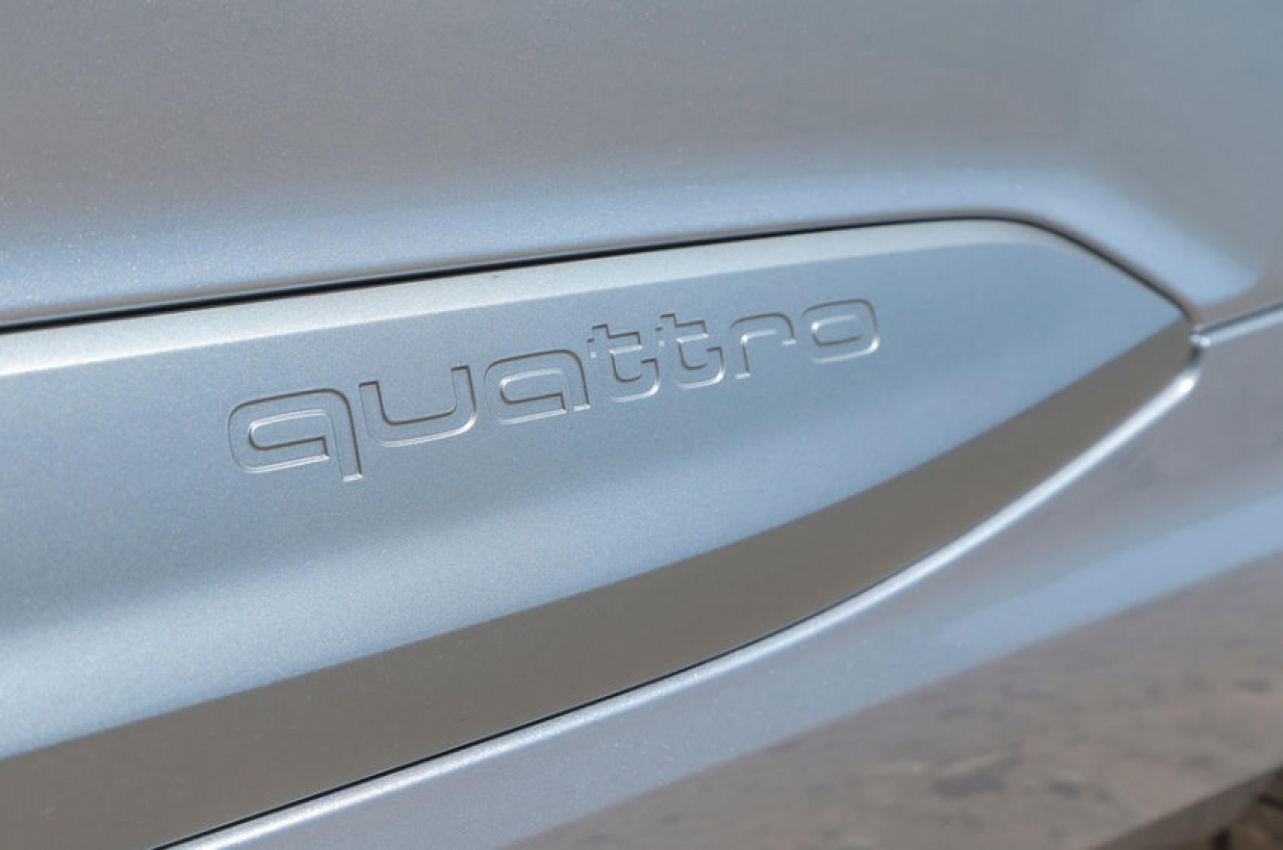 Large front doors are aluminium, so they play their part in the weight-saving regime. They also overlap the sills, so you won’t risk muddying your trouser legs when getting in and out 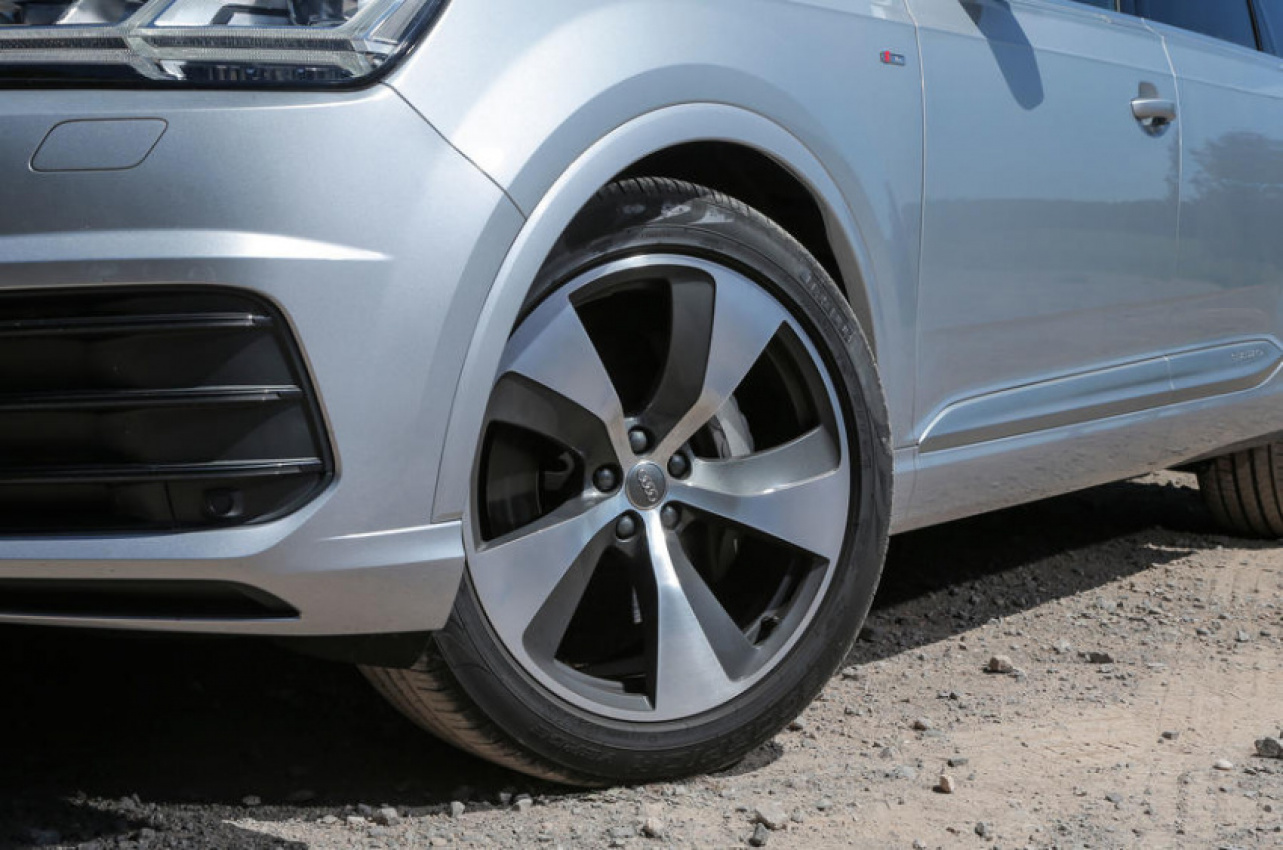 These ‘five-arm turbine’ alloys are one of a pair of 21in wheel options. SE cars have 19s, which look very small on the car indeed

LED tail-lights are wide, with striking running light illumination in the shape of a double arrow. Indicators sweep left and right, for added visual drama 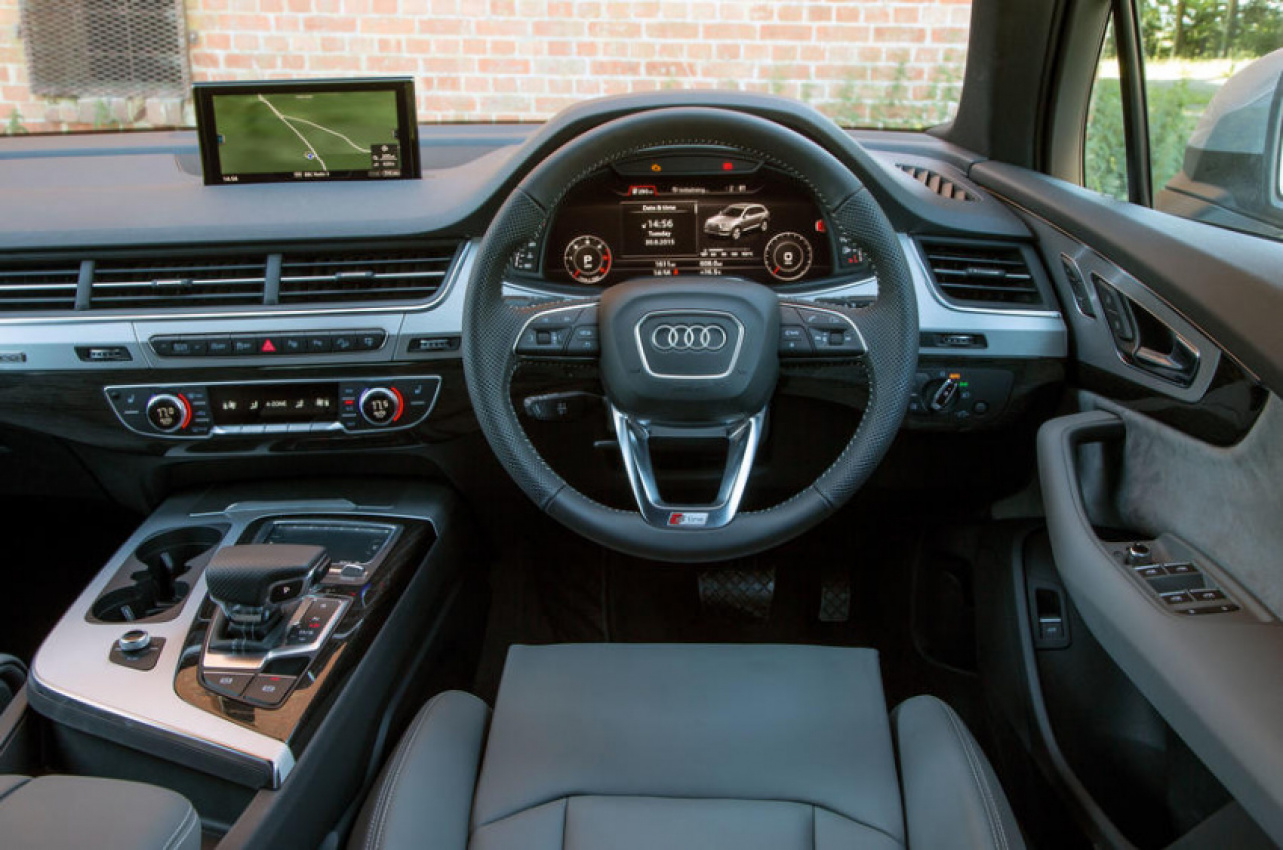 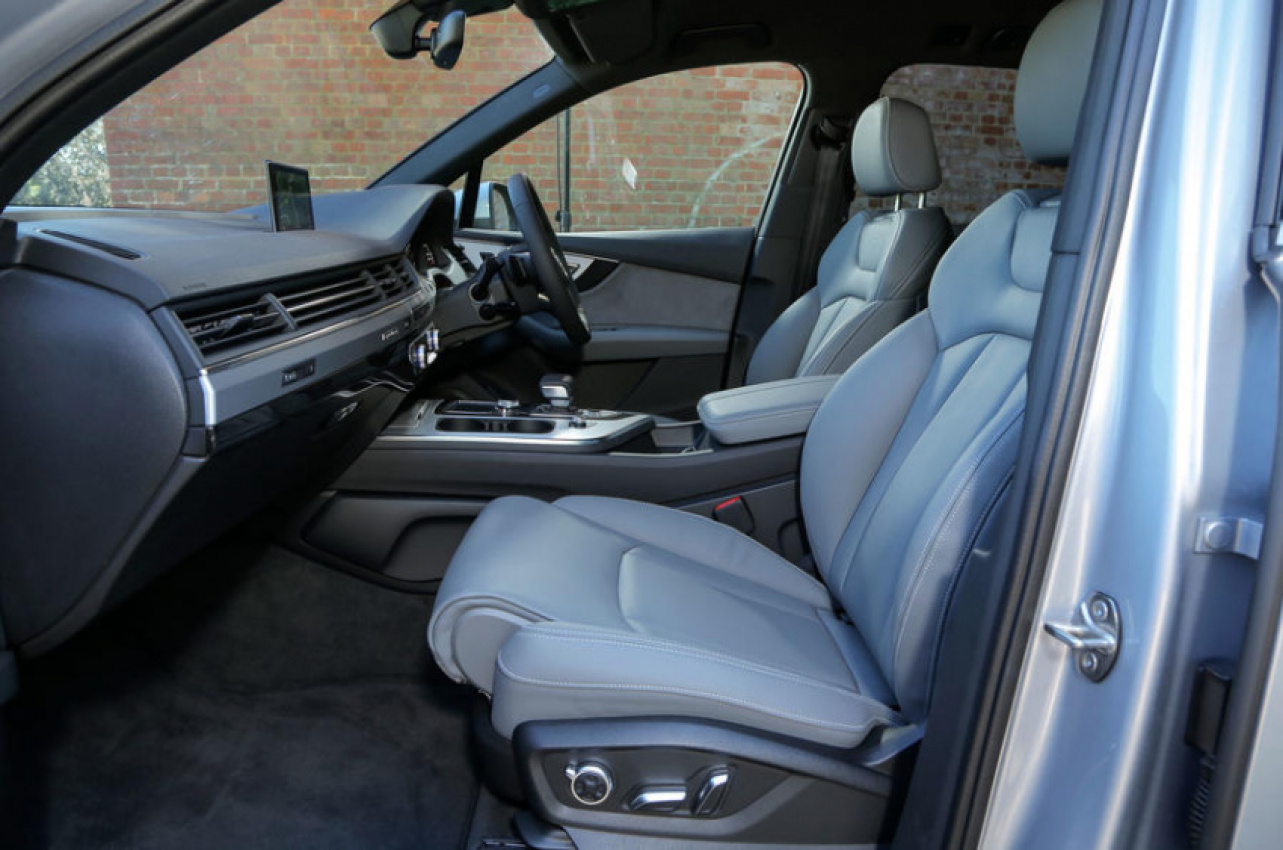 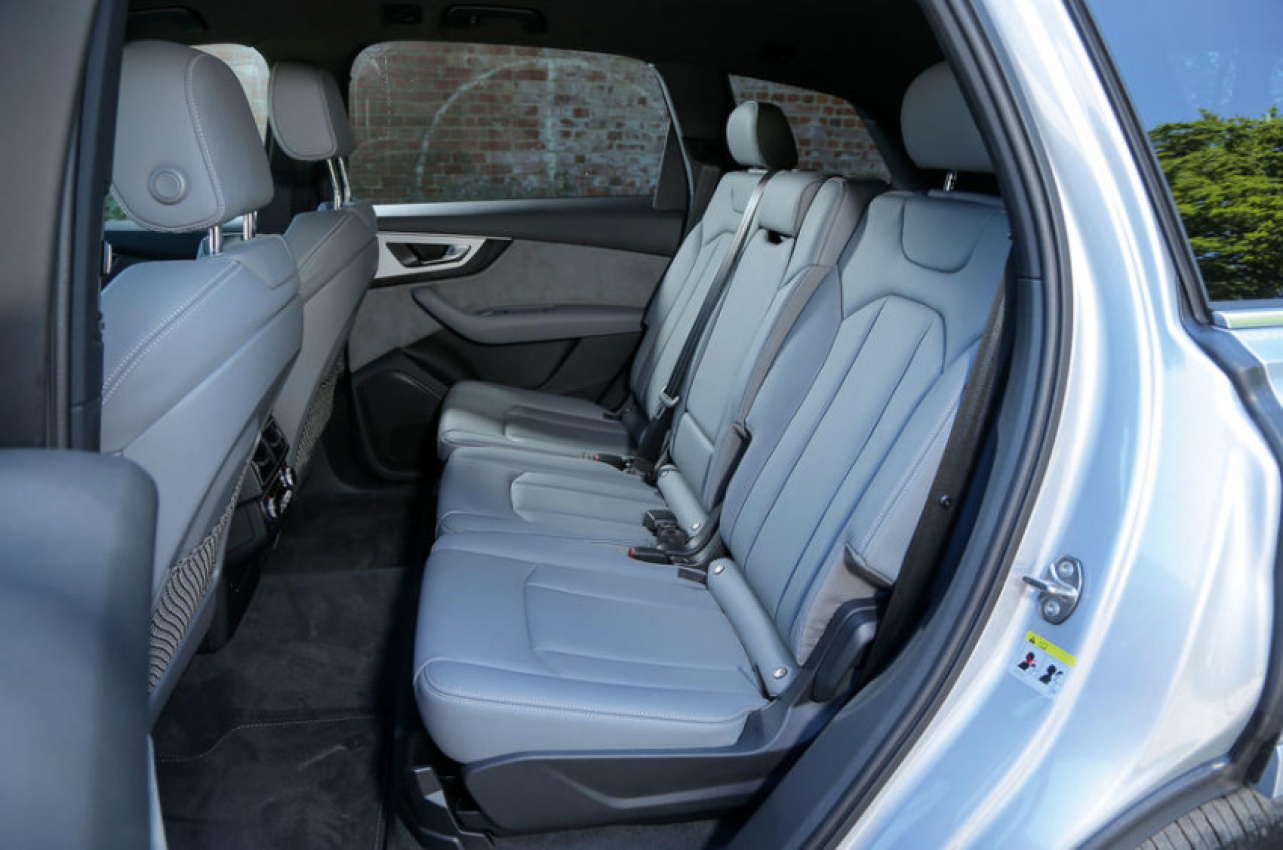 Three individual seats in the middle row slide fore and aft; folding them to give access to the third row requires some muscle, despite the hydraulic assistance 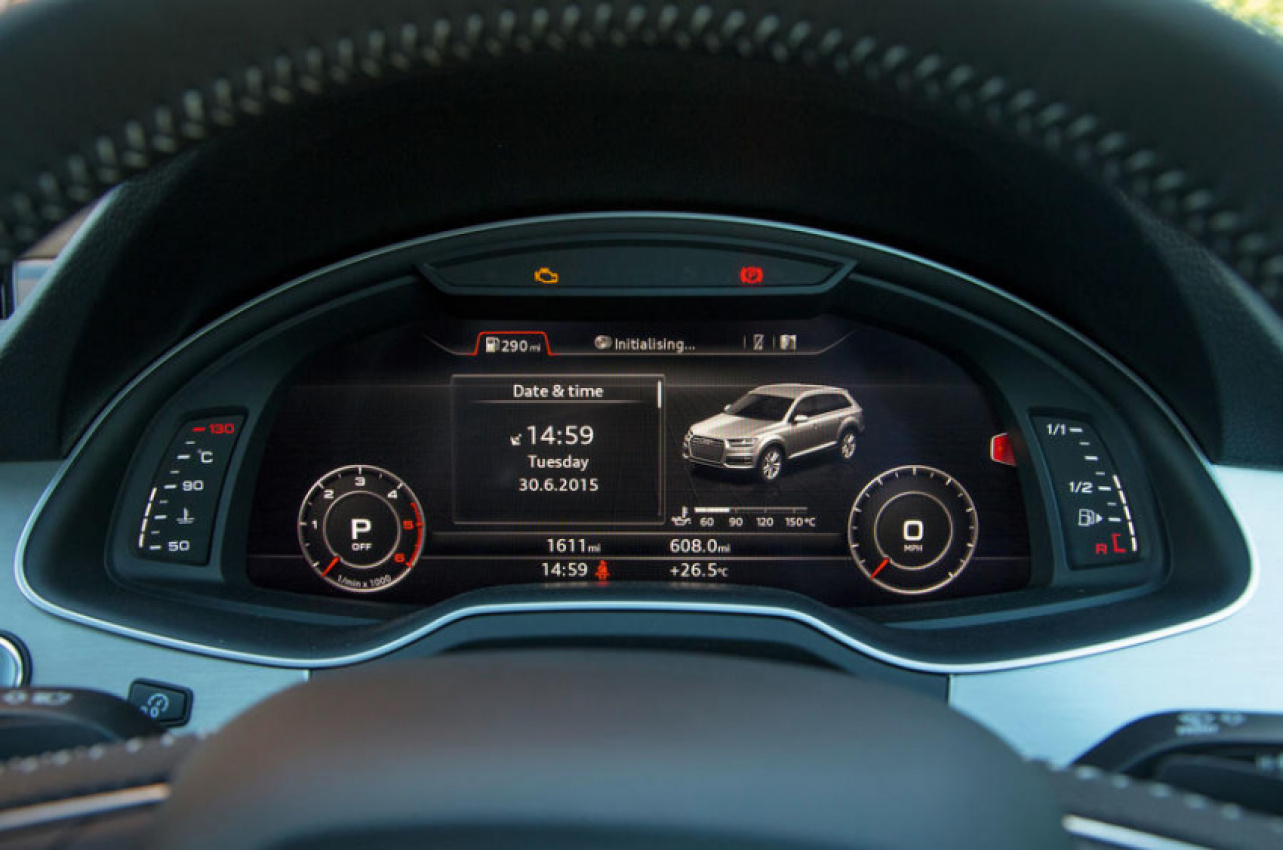 Practically every VW Group infotainment system is up to snuff, but Audi’s version always nudges it a bit further into rarefied technophile pleasure 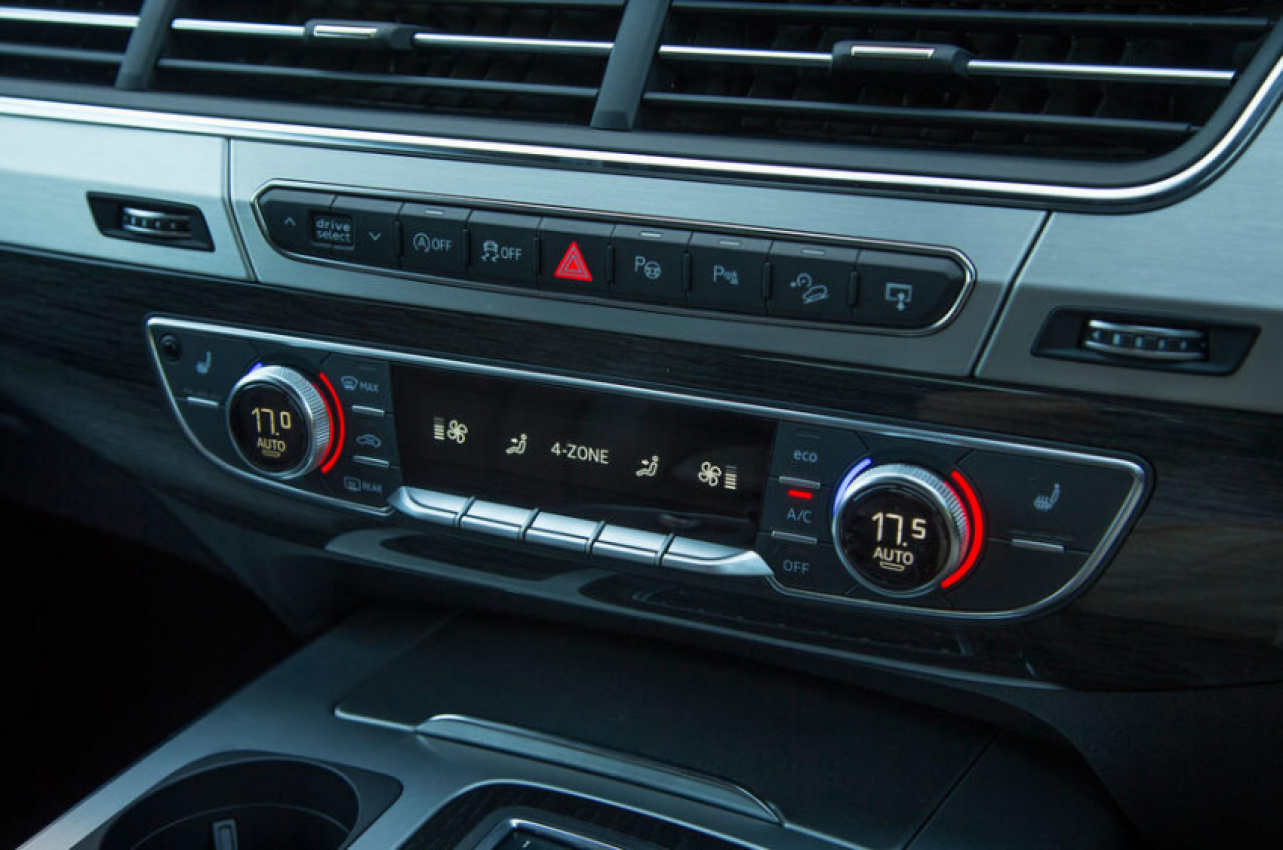 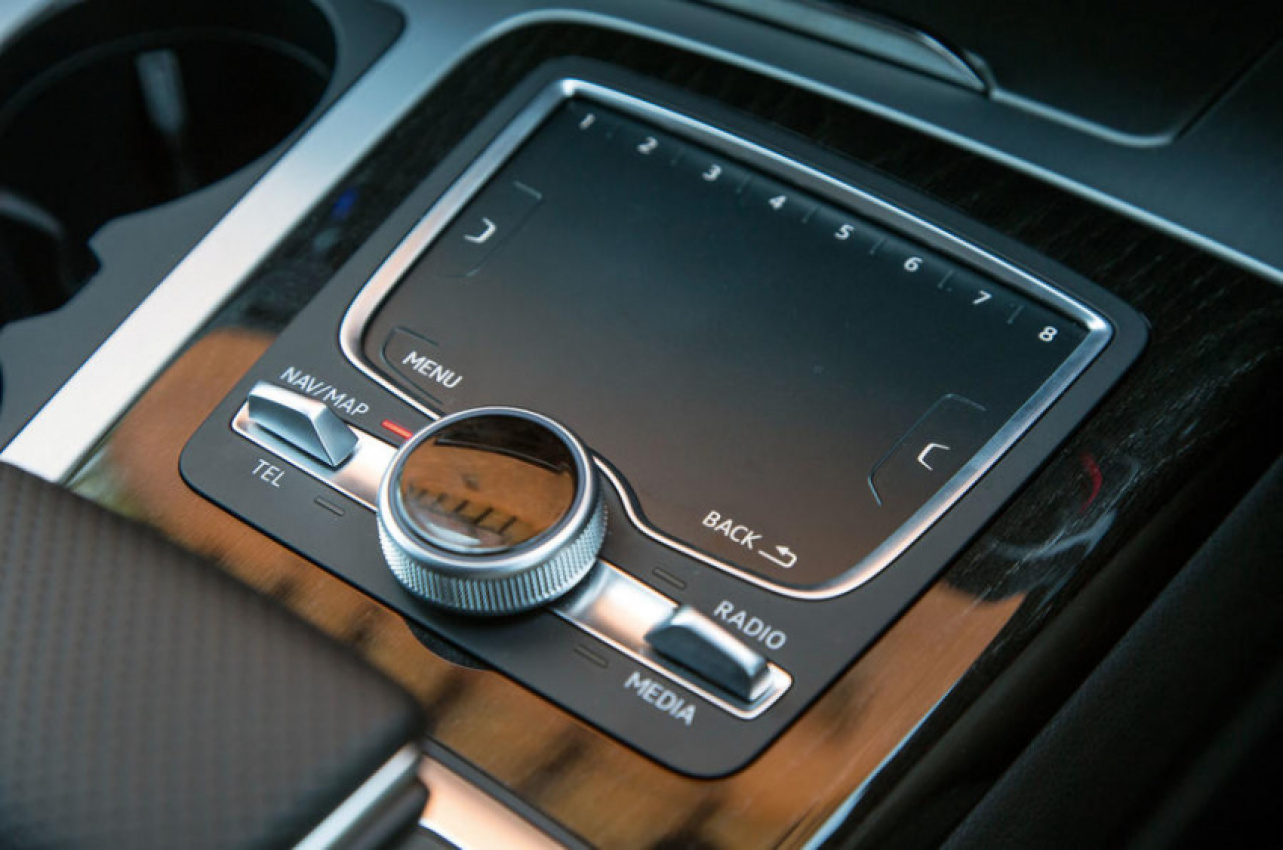 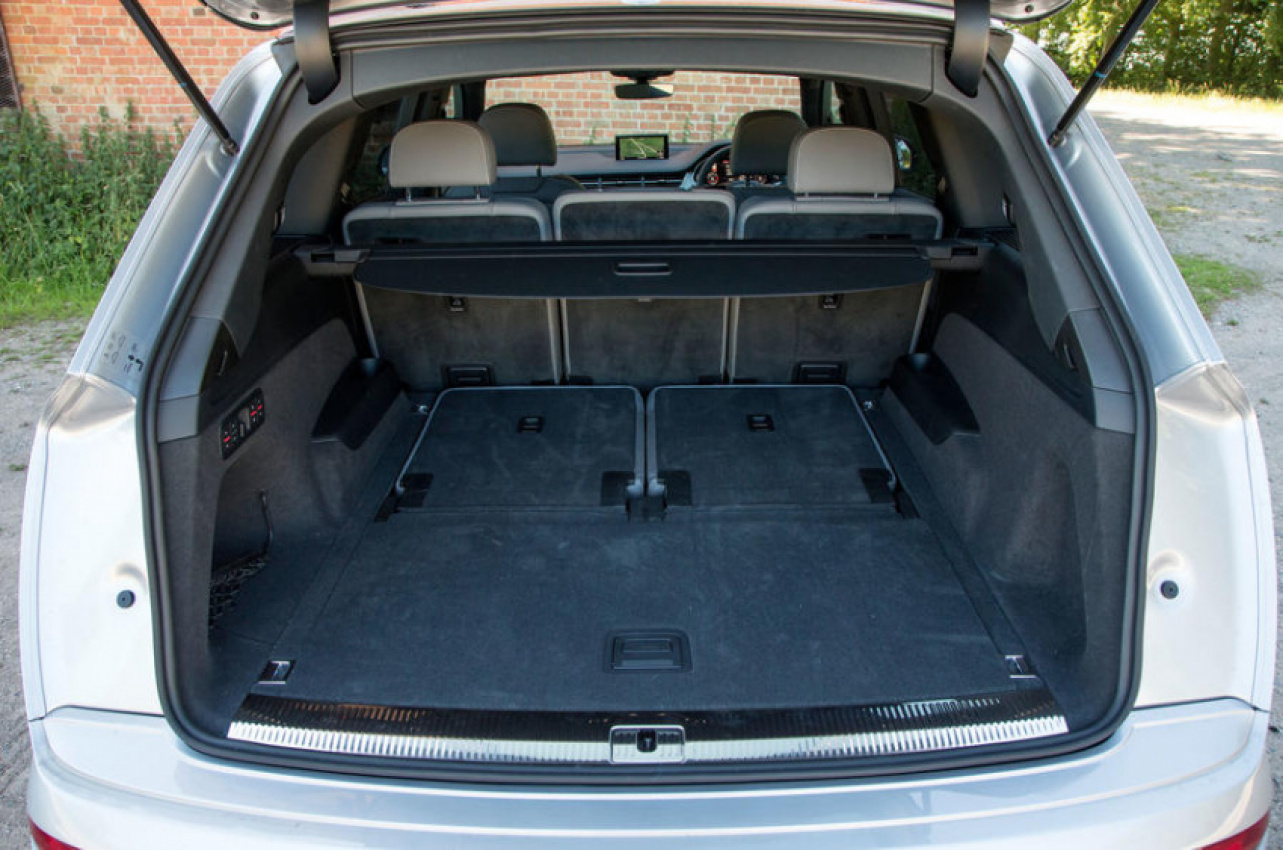 Q7’s load area is 770 litres with five seats raised and 1955 litres with the middle and back rows flattened; rearmost seats fold out of the boot floor easily 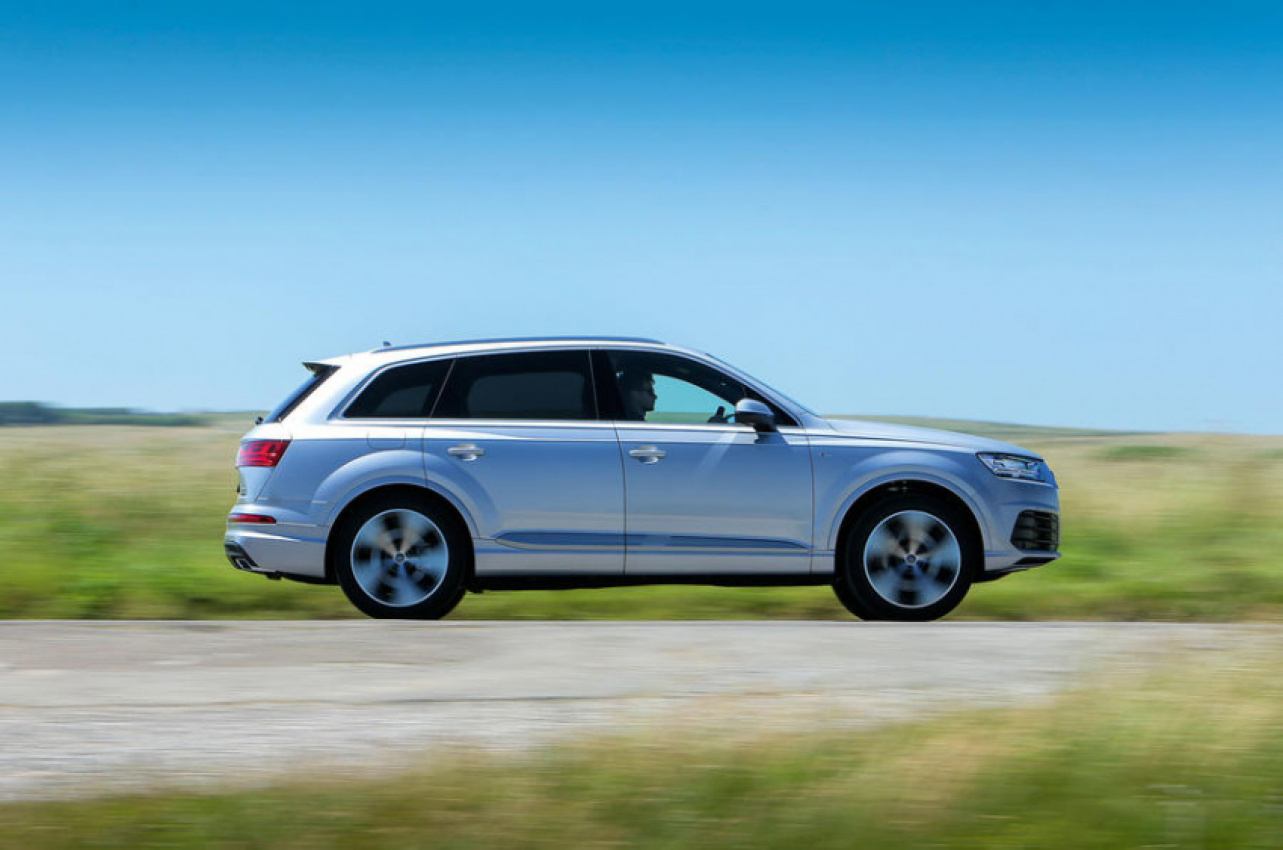 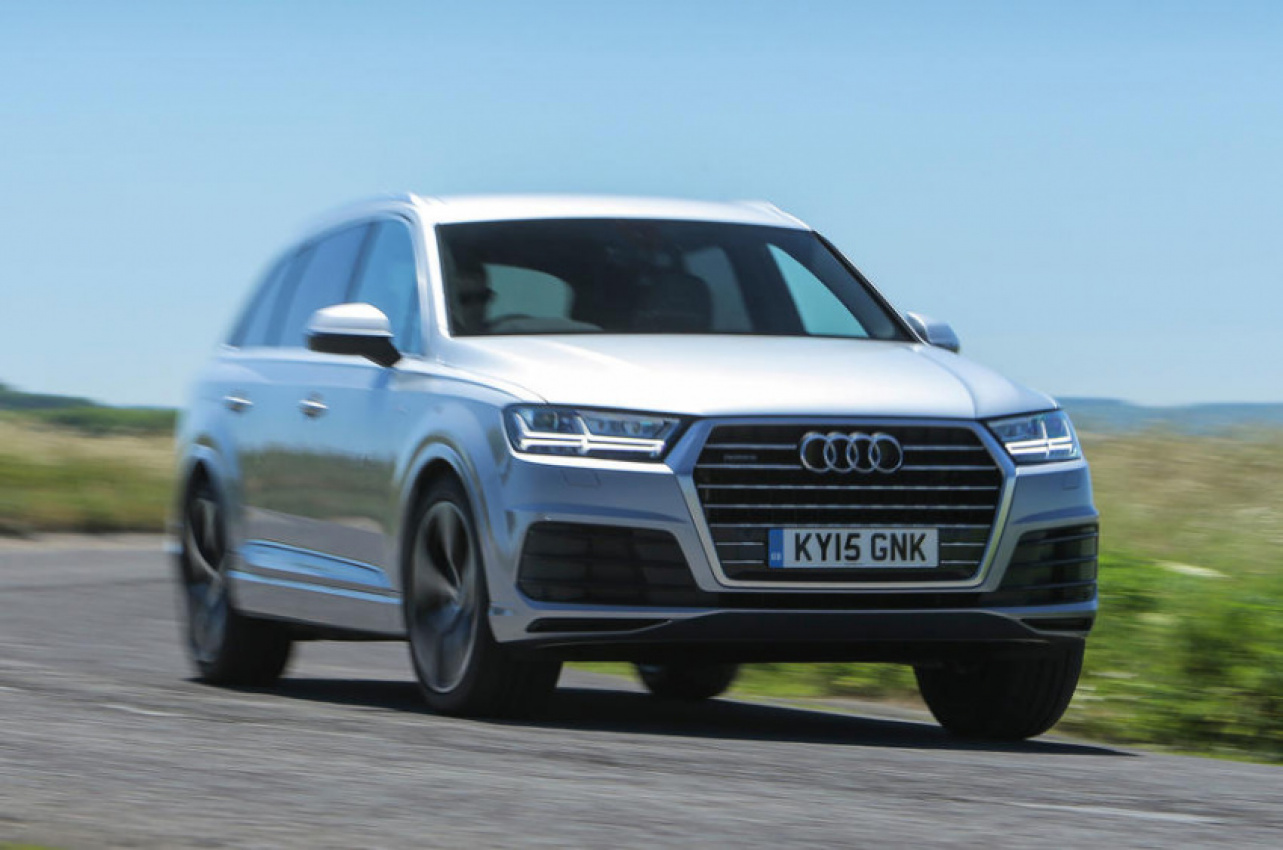 Optional air springs result in a comfortable, compliant ride over most surfaces 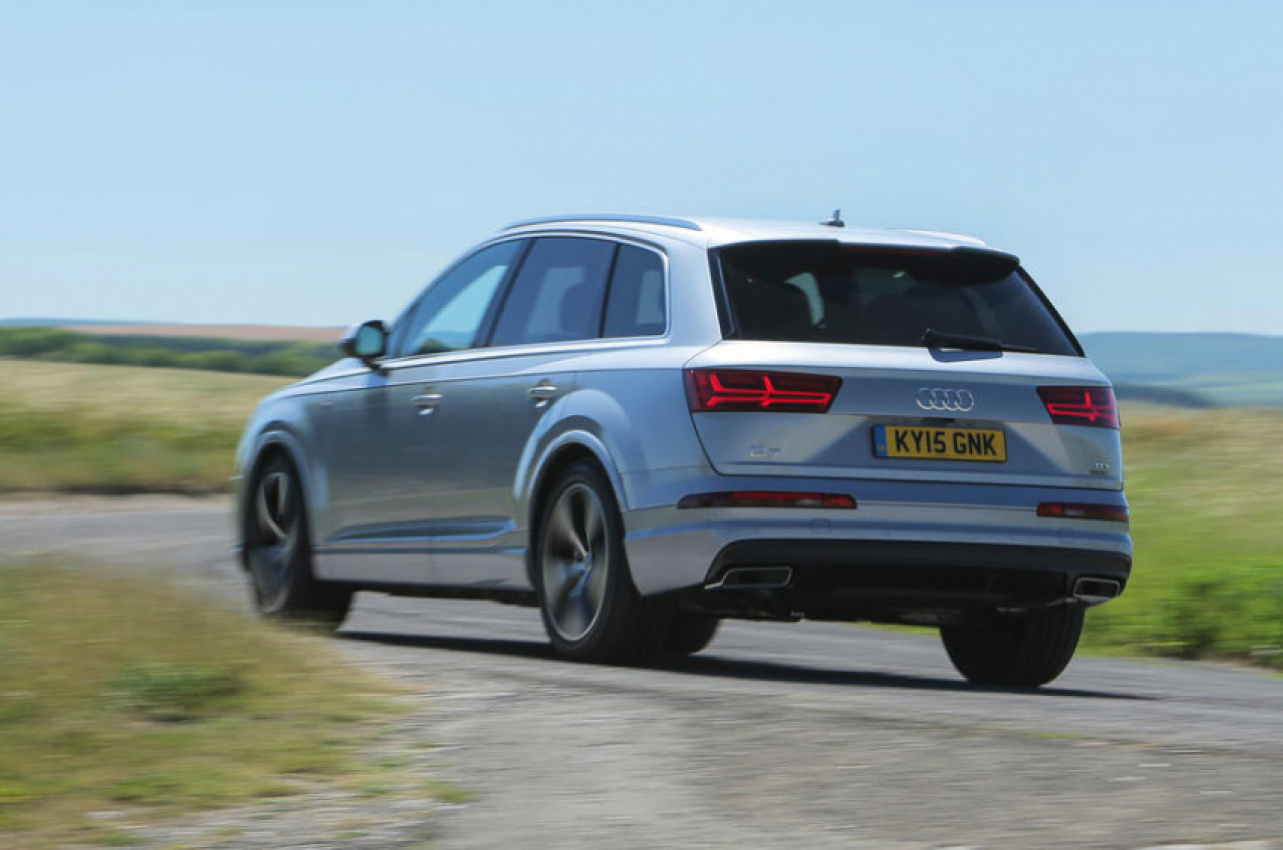 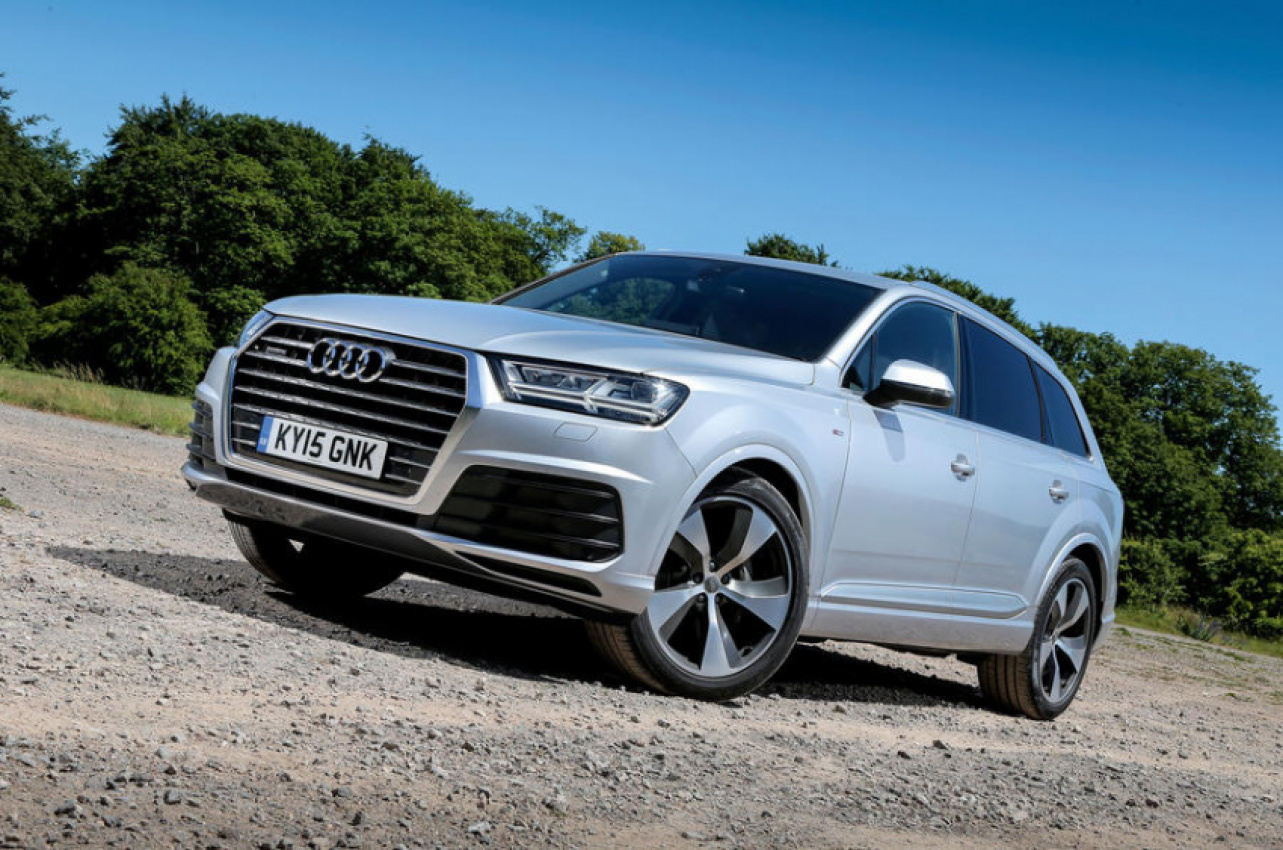 The Q7 is a rather obvious but effective symbol of the sudden, puffer-fish-style expansion of Audi’s model range.

Ten years ago, this car maker didn’t build SUVs. Although it had plenty of quattro-branded four-wheel-drive know-how, it had never taken that next big logical step. It had only recently started making a Sportback in the guise of the previous-generation five-door Audi A3 and had yet to launch the Audi R8 sports car. When Audi launched the original Q7, it was a different form.

Audi SUVs have quickly become big business. From a standing start, the previous Q7 sold fairly strongly and consistently across Europe and North America throughout its lifecycle

Now, as we welcome the second generation of Ingolstadt’s unashamedly full-sized luxury 4×4, it is one of three Q cars in the range. By the time the next Q7 comes along, its high-riding siblings could number as many as six, certainly four with the Audi Q2 on its way. That would be an astonishing rate of expansion, but not necessarily a foolish one.

Audi SUVs have quickly become big business. From a standing start, the previous Q7 sold fairly strongly and consistently across Europe and North America throughout its lifecycle.

It didn’t trouble the volumes of the segment leaders, but since it’s larger and slightly pricier than the average large luxury 4×4, that was predictable. But the Audi Q5 and Audi Q3 have smashed every sales target that the firm has put in front of them. If this new bigger brother for them can replicate just a bit of that success, it’ll be a huge money-spinner for Audi.

As you’re about to read, Audi is evidently determined to deliver that greater success, having thrown the kitchen sink at the new Q7 in terms of new platform, powertrain, chassis and infotainment technology. This car is the first of many new Audis (and Porsches and Bentleys) based on the firm’s new MLB-Evo platform. It’s a bit of a strategic milestone. Already it has spawned a hybrid Q7, the monstrous SQ7 and the highly anticipated, customisable, height-of-luxury Bentley Bentayga.

Audi’s claim is that it’s also advanced, lightweight, aerodynamic and efficient – at the same time as being luxurious, refined, fine handling, capable and laden with sophistication. It sounds like a serious piece of work. But is it any more discreet than the previous Q7, or any easier to like? Let’s see.

The Q7 is, in Audi’s own words, “still a big car” – and relatively so, in a segment full of necessarily big cars. It has shrunk marginally compared with its predecessor, but by no more than a couple of inches in any of the major dimensions.

However, the biggest success of the car’s styling could be to make it appear as though a more significant amount of bulk has been dispensed with. An effective combination of reduced body volumes and strong horizontal bodywork creases makes this car look much lower and less hulking than the previous one.

In the broadest sense, most people probably wouldn’t pick this as the most visually striking or appealing car of its ilk. But its new-found sense of understatement seems much more becoming of an Audi, and it’s a change of which we heartily approve.

What’s more, although it hasn’t cut down on the Q7’s kerbside footprint much, the truth is that Audi didn’t need to. The company has done what it’s famous for: employed cutting-edge technology to deliver the gains that other car makers use more obvious means to achieve and often court compromise for the sake of.

The Q7 is 300kg lighter than the car it replaces. That’s an enormous saving, even on a two-tonne-something car, and it has been made on component parts as various as seats (19kg), doors (24kg), brakes (8.5kg), exhaust systems (19kg) and electrical wires (4kg).

As remarkable as it is, the car’s mixed-metal underbody ultimately amounts to just another item on that list of weight savings (71kg). Made up of just over 40% aluminium and 12% hot-formed ultra-high-strength steel, it features joining techniques new to Audi, as well as structural reinforcements, dubbed ‘torsion rings’, arranged both horizontally and vertically.

UK buyers will be offered a 3.0-litre V6 TDI engine in 268bhp and 215bhp states of tune, driving all four wheels through an eight-speed torque-converter automatic gearbox, a proper centre differential (as opposed to a clutch-actuated power split) and a limited-slip differential between the rear wheels. The Q7 e-tron will be offered with a 3.0-litre V6 TDI and electric motor working in tandem to produce 254bhp, while those wanting a ballistic SUV should look no further than the SQ7, fitted with a twin-turbo 4.0-litre V8 diesel engine forcing out 429bhp.

Steel springs are standard fit, but a height-adjustable adaptively damped air suspension system is on the options list and delivers ground clearance of up to 245mm. Our test car was a 268bhp diesel on air suspension.

Also on the options list is a four-wheel steering system capable of turning the rear wheels up to 5deg in the opposing direction to the fronts at low speeds, to reduce the car’s turning circle. At higher speeds, it can turn them up to 3.5deg in the same direction as the front wheels, to improve cornering stability and steering response.

It’s an unusual and welcome feature to find on such a large and potentially unwieldy SUV. More’s the pity, then, that it wasn’t fitted to our test car.

Roomier than most seven-seat SUVs

"The Audi RS4 is an incredibly quick estate that is a practical, comfortable and luxurious all-rounder"

With a focus on the track, the limited edition Audi RS4 Avant Competition is faster and handles better than the normal RS4. But should you snap one up or stick to the standard car?...

Of the many memorable engine notes throughout history, Audi has offered up a couple of great bangers. The whoosh and warble of the turbo inline-five from the groundbreaking Quattro conjures up peak rally greatness and is a brand-defining classic. More recently, the first-generation RS5 thrummed to the palpable beat of ...

The sharpened RS4 Competition is Audi's answer to the new BMW M3 Touring, and we've put it through its paces

Gearheads, if you haven’t already, take advantage of the current (no pun intended) situation. Despite — or maybe because of — manufacturers transitioning toward electrified powertrains, we are living in a golden age of internal-combustion-powered performance. Let’s call it one last kick at the can, with engineers, especially from those ...

A new Competition package transforms the Audi RS5 into the car it should've been all along.

The new Audi RS 4 Avant Competition is sharper, louder and faster than the standard RS 4

No four-cylinder Audi RS models on the horizon, hybrid power instead

Owner Review: German Marque that never let me down, My 2007 Audi A4 b7

What Are Audi's Designers Thinking?

Flat tyre on my Audi Q7: Went through a nightmare finding a replacement