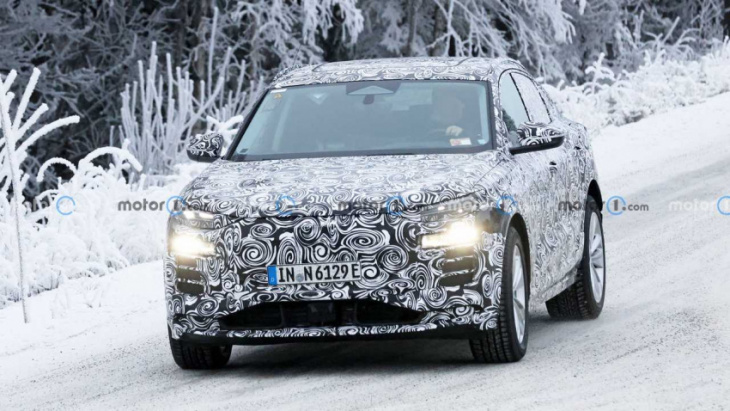 Winter is slowly coming, which means the automakers are moving their development and testing programs in Europe to the more northern areas of the continent to put their new products to their limits in snowy conditions. Audi is already in Scandinavia testing the Q6 E-Tron electric crossover and this is only the second time we see it in Sportback trim. Think of it as the slightly sportier and more stylish alternative to the regular Q6 E-Tron, though the two will share identical components under the skin.

We don’t expect differences in the front fascia as the two core versions of the Q6 will feature identical designs. The spied prototype you see depicted in the gallery below shows a little more of its front-end design compared to previous trial cars, especially the area around the headlights. The camouflage is slowly starting to peel off but there’s a lot of disguise still in place to hide the little details.

The split-light design usually associated with Audi’s electric range takes the center stage at the front. The grille still hides its shape and size but we know it will be of the closed-off type as there’s no engine that needs air. At the rear, expect the RS Q6 E-Tron to look much like a standard Audi Q-series crossover, albeit without any exhaust pipes and with what appear to be slightly sharper taillights.

As mentioned above, the Q6 E-Tron Sportback will share underpinnings with the regular Q6 E-Tron. This means the bones will come from the modular Premium Platform Electric (PPE) architecture, which will be also shared with the fully electric Porsche Macan. A few different outputs depending on the number of electric motors and the software are to be expected, including an RS-branded model. We’ve already seen Audi testing the performance-oriented crossover and we suspect it will have around 600 horsepower (447 kilowatts), similar to what the most powerful Macan EV will produce.

Earlier this year, there were rumors the Q6 E-Tron family could debut before the year’s end but that seems unlikely at this point. We expect both the regular and Sportback models to arrive sometime next year with a market launch before the end of 2023.