AUDI has worn its four-ring logo from the time it converged with Saxony car-makers DKW, Horch and Wanderer – each ring representing one of the four brands of the Auto Union – at the height of the Great Depression.

The company soon became Germany’s second-largest automobile manufacturer and in 1978 rebranded simply to Audi, maintaining the four rings as a nod to its interesting past.

Now, the four rings that adorn the front of every Audi model have come in for a modern makeover.

Brand strategist Frederik Kalisch and designer Andre Georgi were tasked with the important role of updating the famed logo for the electric age and said the Q8 e-tron quattro SUV was a logical place to start.

“There are really only two basic trends in brand presentation and product design today that express precisely this premium quality: That is, on the one hand, the loud and very bold, and on the other, the restrained, pure, and clean.”

A clean look is one designer Mr Georgi says aligns well with Audi’s philosophy of innovation through technology and says a more minimalist look was something current Audi customers have come to expect.

“The purist approach is more in line with our philosophy. One readily apparent thing: Strong brands win over customers primarily through their products’ underlying substance and discreet identifying elements,” said Mr Georgi.

“At Audi, this has always been the case, and we’re now making it even more consistent. Our philosophy is that every detail must convey a meaning or serve a purpose. On the product, it is – above all, our four rings, unmissable on the front and rear of every Audi model, that make an Audi an Audi.

“We want our quality to speak through the design and the product itself. The new two-dimensional look gives our rings a significantly more modern and even more graphic makeover, although their geometry is almost identical to the former ones.”

Indeed, the two-dimensional logo is one several brands have adopted as they move into the electrified age.

Mr Kalisch explained that the highly graphic nature of the logo ensures consistency across customer touchpoints, helping the four rings appear the same regardless of when or how they are viewed.

“The two-dimensional rings originated at Audi in 2016 as a consequence of digitalisation, essentially to depict the rings in a manner that suited the medium. Three-dimensionality on two-dimensional displays would not have met our technical and aesthetic requirements,” he said.

“Our brand logo is highly graphic – which is an advantage, as it looks great in two dimensions. To ensure a consistent brand presence across all customer touchpoints, we coordinated with the design team to kick off the process of redesigning the rings on our vehicles.”

The meaning behind the change was emphasised by Mr Georgi, who explained that it is important that Audi’s corporate identity is standardised across all mediums.

“Using a two-dimensional logo on the outside of our vehicles first came up in 2019. Then things really took off at the beginning of 2020,” he said.

“Our vision is to move the corporate identity from the digital area we just described onto our vehicles and to standardise vehicle identification across all models. We want the four rings to look the same everywhere in the future: Whether in a magazine, on your smartphone, or a billboard – and on or inside the car.”

Mr Georgi said the changes, although subtle, help to optically brighten the logo, while maintaining a premium-quality look.

“Our vehicle logo comprises three components. We’re keeping it consistently free of chrome with a high-contrast black-and-white look. It’s as though the striking white floats are embedded in a black glass body for an even greater radiance,” he explained.

“By optically brightening the logo, the white lends the rings a flat, premium-quality look, which still appears three-dimensional in detail.”

The senior designer explained that the materiality of the logo was an important part of the redesign, saying the black and white rings help to give the now 93-year-old emblem an “unmistakable corporate identity”.

“Today’s chrome rings stand for high quality; the material alone conveys that message. But we believe that we have found the ‘new chrome’. The clarity of the new black and white rings makes our corporate identity unmistakable,” said Mr Georgi.

“The thin black border around the rings makes for a consistent, premium-quality appearance, regardless of the car’s paint or radiator grille colour; and customers can continue to opt for our new rings in black. This variation replaces the white with a dark grey that looks like high-gloss black.”

Beyond the four rings, Mr Kalisch and Mr Georgi say there are other “vehicle identification schemes” that will tie in with the brand’s future strategy.

The Audi Type font has been modernised along with a number of other “technological identifiers” that bring the same tone-on-tone theme displayed on the four ring badge to other elements of the vehicle.

“In 2020, our team reworked the brand strategy and corporate identity. This rework led to our new vehicle identification strategy, including the vision of two-dimensional rings on our vehicles,” said Mr Kalisch.

“It’s not only that vehicle identification has become more premium; we have also standardised the fonts in and on the vehicle. In the future, our models will only use Audi’s unique font, known as ‘Audi Type’,” he said.

“The basic tone is significantly more restrained without compromising on distinctiveness or quality. We’ve now designated the B-pillar as the detailed model, derivative, and technology identifier.

“This designation is because it has an identical design across all vehicles: always two parts in high-gloss black and always in the passengers’ field of view when entering and exiting. The lettering on the B-pillar was deliberately engraved tone-on-tone.

“Identification and vehicle design now act as a unit that aligns with Audi’s new brand positioning.” 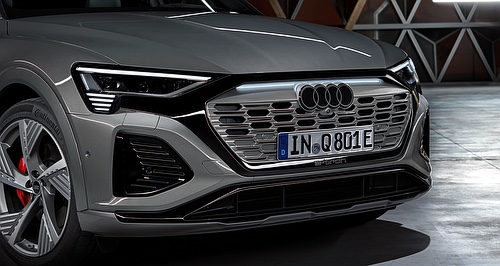 Audi now part-owns… the Alfa Romeo F1 team This is one of those situations that makes complete sense and yet no sense at all at the same time: Audi has bought a minority stake in the Sauber F1 team, on its way to entering the sport as a works team in ...

The most recent photos reveal subtle styling changes for the 2024 refresh.

What does Audi say about this being the next A8? Will the 2024 Audi A8 have the same tech as the concept? What is the PPE EV platform? Just last week we showed you images of the new Audi Activsphere EV concept. It along with the other three Sphere ...

Image: Audi Audi has been working on a couple of important new electric vehicles, including a “tougher all-electric luxury 4×4, and a new concept off-roader that looks more like a small truck. The new luxury 4×4 is set to hit the roads in 2027, and was hinted at in ...

It should debut sometime soon.

Audi Buys Into Sauber F1 Team Ahead of 2026 Entry

Photo: Audi AG Audi has purchased a minority stake in the Sauber Formula 1 team (which is currently doing business as Alfa Romeo F1), as the manufacturer outlined in its plans announced last October. The German automaker is scheduled to join the world championship in three years. The 2026 ...

Indy car racing rode a wave of momentum in 2022 as the NTT IndyCar Series returned to the masses with an exciting on-track product. Heading into the new year, it is important for the series to harvest that momentum and continue to grow – while also working to attract ...

Audi's chief designer Marc Lichte says the Grandsphere is a "very concrete teaser" of the upcoming A8 e-tron production model.

Audi To Keep E-Tron Name In The Electric Era

Audi activesphere concept is a fastback, SUV and pickup truck

Audi To Invert Design Process By Developing The Interior First