The German brand won't field its own Formula 1 team but it will serve as an engine supplier. 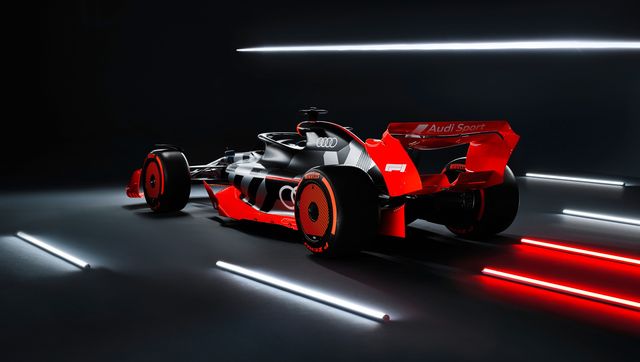 A little more than a week after Formula 1 approved new engine regulations that will go into effect in 2026, Audi officially announced its plans to compete in the premier open-wheel motorsport series. Audi’s entry into F1 coincides with the start of these new engine rules, with the German automaker announcing its intent to start supplying engines for the 2026 season. Audi will develop its power unit at the Audi Sport facility in Neuburg, the first time in more than a decade an F1 powertrain will be assembled in Germany.

One of the stated goals of F1’s revised engine regulations is to attract new power unit suppliers. Starting in 2026, the turbocharged 1.6-liter V-6 engines used in Formula 1 will run on a 100 percent sustainable fuel, while the electric portion of the hybrid powertrain will produce three times the power as today’s setup, two factors that Audi explicitly stated were critical to its decision to join F1.

Starting in 2026, the MGU-K, which harvests kinetic energy and deploys electrical energy via the crankshaft, will see its output nearly triple to 350 kilowatts, or about 469 horsepower. This will boost the total system output to well over 1000 ponies. The MGU-H, which currently harvests heat energy via exhaust gases in the turbocharger and can deploy electrical energy to reduce turbo lag, will be removed from the F1 power unit in 2026. The increased reliance on electricity will see the amount of fuel used in a race drop from 100 kg to 70 kg, while the removal of the MGU-H, along with other measures, is intended to decrease costs.

The announcement came with images of a Formula 1 car mocked up with Audi livery. That said, take this image with a grain of salt as it may not be indicative of what the actual Audi-powered F1 cars will look like during the 2026 season. Audi will not field its own team, but it will provide powertrains to at least one team. The brand said it will reveal which team they plan to partner with by the end of 2022. This team will likely be Sauber, which also announced today that its technical and commercial partnership with Alfa Romeo will end after the 2023 season. Alfa Romeo-Sauber is currently in sixth in the championship, which would be the team’s best result since 2012 if it can maintain this position.

The possibility of Audi joining Formula 1 has been rumored for years. Audi says it is currently focused on hiring personnel and sourcing the technical infrastructure and buildings needed to develop the power units. These components should be in place by the end of the year, giving Audi three years to prepare its power unit before the 2026 season kicks off. With Porsche also said to be entering F1 as an engine supplier, potentially with Red Bull Racing, 2026 is set to be an important year for the biggest global motorsports series.

PHS Automotive, the official distributor of Audi in Malaysia has just launched the Audi RS Q8 for the Malaysian market. Fetching a price of RM 1,699,990, the RS Q8 is the more reserved cousin of the Lamborghini Urus. Powered by a 4.0-litre bi-turbo V8 engine paired with an eight-speed ...


View more: Audi RS Q8 launched in Malaysia from RM 1.7m – in case the Urus is too flashy for you

The Founders Festival will be held from September 25 to 27, 2022 in Munich and in person for the first time in two years

Priced at RM 1,699,990 (inclusive of duties and sales tax) Same underpinnings as the Lamborghini Urus 2-year record holder for fastest SUV around the Nurburgring PHS Automotive Malaysia (PHSAM), the distributor of Audi cars in Malaysia, has introduced the to its line-up. With 600 PS and 800 Nm of ...

Priced at RM 1,699,990 (inclusive of duties and sales tax) Same underpinnings as the Lamborghini Urus 2-year record holder for fastest SUV around the Nurburgring PHS Automotive Malaysia (PHSAM), the distributor of Audi cars in Malaysia, has introduced the to its line-up. With 600 PS and 800 Nm of ...

The Audi A4 Technology variant costs Rs. 50.99 lakh (ex-showroom). Audi has introduced new features on the A4 ‘Technology’ variant. The carmaker has also added new colour options. The A4 Technology variant now comes with a B&O audio system with 3D sound and a flat-bottom steering wheel. The updated ...

The Audi S3 goes toe-to-toe with products from BMW and Mercedes-AMG in the mid-tier hot hatchback category, but which model offers you the best bang for your buck? Audi’s S3 has its hands full trying to dethrone rivals such as the BMW M135i xDrive and Mercedes-AMG A35 when looking at out-and-out performance, and ...

MotoGP Will Head To Saudi Arabia To Hold A Grand Prix

Problematic Airbags in Volkswagens and Audis