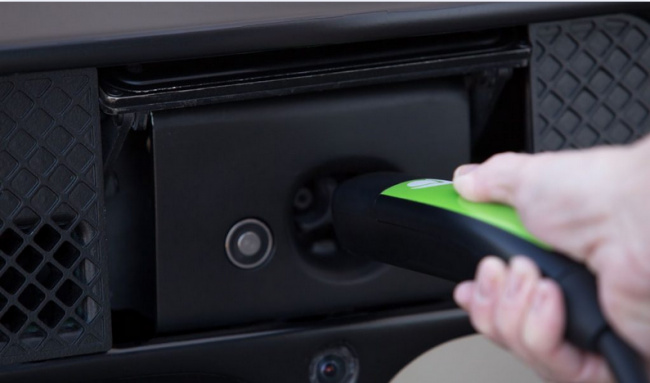 Aptera has announced that its upcoming launch edition vehicle will come standard with DC fast charging, and is now technically capable of using Tesla Superchargers.

Since its inception, a major hurdle for the Aptera design team has been the vehicle’s charging. Both Aptera CEOs have shared their distaste for the CCS charging plug (going as far as petitioning against it). While the Tesla charger was ideal for their use case, for the longest time, they lacked the ability to legally use it or the technology to charge with it at all. But thanks to recent jumps in engineering and Tesla’s release of the “North American Charging Standard” (NACS), Aptera is more ready than ever.

In the video, Aptera CEO Chris Anthony states that the launch edition vehicle will come with DC fast charging. And after showing the charging unit, he explains that while it has a minimum charge rate of 40kW, it could be as high as 60kW “after validation.” While some may be disappointed by the slower charging speed than other major manufacturers, there is reason to be hopeful.

First, unlike competitors with far larger cars, Aptera uses a smaller and far lighter battery, meaning that despite the slower charging speed, it could charge just as quickly. Secondly, if Aptera can use an effective “charge curve” that can keep the battery charging at the highest rate possible at all times, it may end up charging far faster than many would expect.

The other major part of this announcement is Aptera’s official use of the Tesla (NACS) charger plug that allows its vehicles to physically use Tesla superchargers. However, Aptera has not yet announced if it has made a deal with Tesla to enable their cars to integrate into the Supercharger network, which will be critical before the vehicles can hit the road.

Aptera’s charging solution will be coming on its launch edition vehicle, which after completing crash safety testing, will enter production to produce 10,000 units annually. Along with the company’s recently started solar panel production, it finally looks like the car is coming together. Aptera currently has just over 40,000 reservations, but through a production ramp, the company hopes to meet demand via its Carlsbad, California, over the coming years.