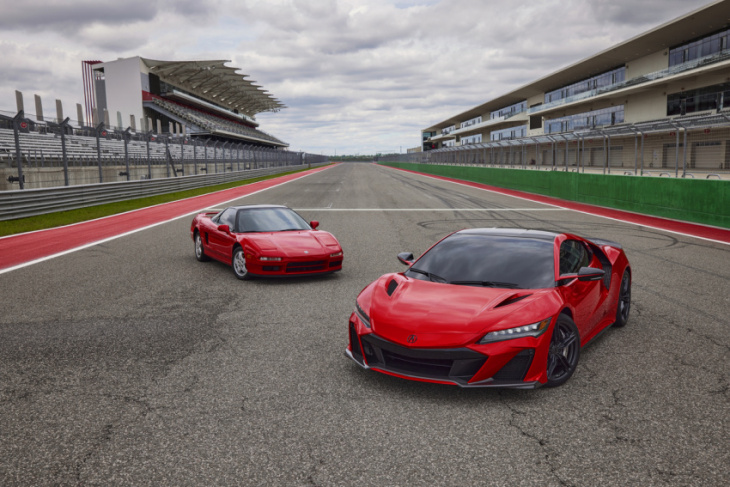 Acura’s Brand Vice President has stated that there is a high likelihood that the next-generation Acura NSX will be fully-electric.

According to an interview by Nikkei Asia with Jon Ikeda, Brand VP for Acura, the next generation of Acura NSX will likely be electric; “I would bet on it,” he stated. This rejuvenation of the NSX nameplate could be the exact thing the Japanese brand needs right now, especially as fully electric coupes are in incredibly short supply.

When the current generation Acura NSX was revealed, despite its impressive all-wheel-drive system, handling, and hybrid powertrain, it quickly found itself in the shadow of the Chevy C8 Corvette on one side and cheaper (faster) Tesla models on the other; such is the existence of hybrid vehicles.

Acura hopes to change that with its next-generation Acura NSX, or at least the brand VP does. With an all-electric drivetrain, the vehicle could once again define a generation of Japanese sportscars and bring attention to the Acura brand, but in a world of hyper-accelerating electric vehicles of all body styles, how will the Acura define itself? “It won’t be about straight lines,” said Ikeda.

Since its inception, the Acura NSX was never meant to race in such “linear” conditions. The Acura certainly had power back in the day, but its futuristic and smooth styling and its god-tier handling are what came to define the platform and Japanese sports cars more generally. The next generation of Acura NSX has the opportunity to do the same thing.

Lotus has shown that electric vehicles can be more than just fast 0-60 times. Lotus’s new Lotus Evija brought traditional Lotus character to an EV platform, “adding lightness” and dropping jaws with its gorgeous aerodynamic design. Acura could do the same thing.

Sadly, the current generation Acura NSX has shown that a simple nameplate will not bring fans to showrooms. Fans are looking for something substantial, something unique, and something that can relate to the brand and its heritage. Here’s to hoping that Acura, and Honda in general, can accomplish that.

Is the Acura ILX a Luxury Car?

How Fast Is the Acura MDX Type S?

4 Used Acura NSX Alternatives That Are Cheaper Than $100,000

With only a brief session in a prototype, we can't draw final conclusions. But the 2024 Acura Integra Type S feels like it has that special Civic Type R magic.

Acura has shared the first info on the new Type S version of the Integra. This high-performance variant features the same components as the Honda Civic Type R: a 300-plus-hp turbocharged 2.0-liter inline-four, a six-speed manual transmission, front-wheel drive, and a limited-slip differential. The 2024 Integra Type S will ...

What’s the best way for Acura to improve upon its new Integra? Give it more power, better tires, and an upgraded chassis. So we’re pleased that the Integra’s upcoming performance variant, the Type S, takes its powertrain from the delightful new Honda Civic Type R and includes numerous handling upgrades. ...


View more: 2024 Acura Integra Type S Is More Like What We Were Hoping For

I start giggling as I accelerate onto the oval test track at Honda’s Tochigi research and development center in Japan, and I don’t stop until I take the exit two laps later. The cause of such automotive glee: a prototype drive of the 2024 Acura Integra Type S. The ...

This video clip highlighting the Acura Integra 1.5L Turbo 4-Cyl. was played during the recent ceremony celebrating the 2022 winners.

Are you going to miss it? Fans of the Acura NSX are lamenting the fact the final NSX Type S rolled off the production line in Marysville, Ohio recently, closing out another era for the performance car nameplate. It was just the 350th example of the second-generation supercar, driving home ...

Will the New 2023 Acura Integra Offer a Coupe?

Is the Acura RDX the Most Reliable Luxury SUV in Its Class?

Acura has officially ended production of the NSX

Acura Wants You to Tune the Integra

How Much Does a Fully Loaded 2022 Acura NSX Cost?

The 2024 Acura Electric SUV ZDX Is Coming: Why It’s Worth Waiting For

Do These 6 Cool Features Make You Want to Drive the 2023 Acura MDX Luxury SUV?

5 of the Fastest Acura Models Ever Produced

Supercharged First-Gen Acura NSX Sounds Like Heaven On The Autobahn