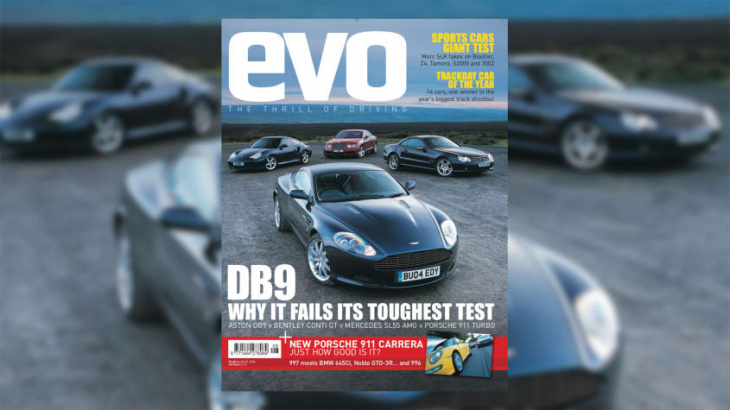 ‘The launch was in Tourrettes,’ recalls Dickie.

Before anyone pedantic spoils the beautifully foul-mouthed moment and starts talking about the extra ‘r’, conversation returns to the Aston Martin DB9, which was the car that was launched in the south of France. I’m quizzing John Barker, Dickie Meaden and Jethro Bovingdon about the beautiful GT because the whole saga around the 9 has always fascinated me.

A couple of months before I joined evo in 2004, the cover of issue 070 had a group test on it; the new Aston posed front and centre, with backing vocals being provided by a Porsche 911 Turbo, a Bentley Continental GT and a Mercedes SL55 AMG. But it was the words underneath the photo that packed the punch: ‘DB9: WHY IT FAILS ITS TOUGHEST TEST’. It was intriguing and rather fearless and as a reader I liked it.

In an age of clickbait, it probably doesn’t seem that brave or bold. But it takes a lot more guts to print something on the cover of a magazine that will be on shop shelves for a month than it does to publish something online that can be changed in the CMS in a few seconds. Certainly Peter Tomalin’s Ed Speak suggested it wasn’t a decision that was taken lightly. ‘There has been much furrowing of brows and chewing of biros in the office these past few days…’ he began, before going on to acknowledge that, not for the first time, evo’s opinion was out of step with those of other motoring mags.

In the past the magazine hadn’t been crossed off any Christmas card lists for its criticisms, but Peter noted that not everyone took fault-finding well: ‘Criticise Ferrari and you’re virtually excommunicated. The Italians take it extremely personally. And the Brits (and Germans) who run Aston’s splendid new factory at Gaydon? I’ll let you know next month.’

Well, it’s fair to say that some at Aston didn’t take it very well. John and Jethro were summoned to Gaydon…

‘It was a very weird thing because they called us in basically to tell us off and to tell us why we were wrong,’ says a still slightly bemused Bovingdon

The crux of evo’s issue with the car was that the ride quality of the DB9 was far from resolved and the steering response was amiss too. Something seemed to have gone awry between the car Dickie drove on the launch in France (seemingly with much better, pre-production dampers) and those that reached the media for tests in the UK. This was the second sub-par DB9 that the magazine had experienced too, so it wasn’t down to one rogue example. ‘I said, “What would you choose to drive to the south of France in?”’ remembers John, ‘and this pompous marketing man blustered, “Oh, DB9 every time,” and I knew we were wasting our time.’

‘It was like someone trying to indoctrinate you or brainwash you. Shine lights in your eyes until you agree with them,’ says Jethro.

‘I remember that he didn’t join us for lunch in the canteen,’ concludes John, ‘but someone from PR did and as we were walking down there she said: “I agree with you. I prefer the Vanquish.”’

Chinese company Geely has taken a stake in Aston Martin. Their investment is part of a £654 million capital raise for the British premium car brand. According to a terse statement from Aston Martin, Geely joins existing investors such as Mercedes-Benz in the Public Investment Fund. The fund has ...

Geely owns Volvo, Polestar, and Lotus, and has a stake in Mercedes-Benz.

Supercars Geely Holding confirms it has acquired 7.6 per cent of Aston Martin Lagonda The Chinese MegaCorp that owns Volvo, Lotus, Polestar and Lynk&Co has now bought a stake in Aston Martin. Geely today announced it had acquired a 7.6 per cent share of the “ultra-luxury British performance brand”. Geely’s ...

Aston Martin has gained Geely as a new investor following the completion of a rights issue first announced in July, which is aimed at raising funds to pay down debts as well as fuel investment in future product. As detailed in a regulatory filing issued on Thursday, Geely has ...