Alonso: Top six at Spa a realistic target for Alpine 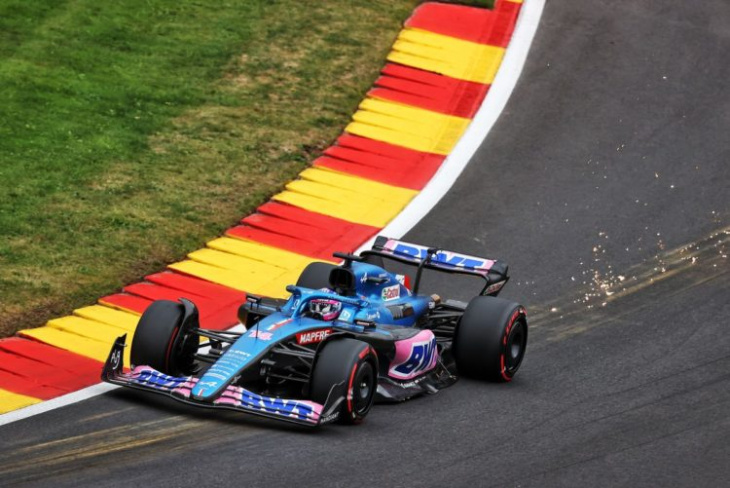 Fernando Alonso has set his sights on obtaining a top six result at the Belgian Grand Prix, as he prepares to take the start from the second row of the grid.

Alonso ended the qualifying session from Spa in sixth place, but penalties for some of his rivals ahead promoted him up the starting order.

The Alpine driver, who recently announced his move to Aston Martin for the 2023 season, hasn’t been a stranger to starting from the higher positions on the grid this season with a second place start in Canada being his best.

Alonso noted that he hopes for a better race than the one he ran in Canada, where he crossed the line in ninth.

“We started P2 and we did some mistakes there. Nevertheless I think we have strong competitors behind.

Wolff: 1.8s deficit to pole is not acceptable for Mercedes

“The Mercedes are normally very strong on race pace and also Verstappen will eventually come into the podium positions as well.”

Due to the weather in Friday’s Free Practice sessions, teams didn’t get a chance to do their usual long runs and race simulations.

Alonso feels that the lack of data on tyre degradation will make teams blinder on potential strategies.

“That’s the only question mark that we have but it’s the same for everybody,” he said. “We’ve been competitive and in front of Mercedes today is a little bit of a nice surprise.”

His Alpine team-mate, Esteban Ocon, was one of several drivers this weekend who has taken a grid penalty due to a change in his Renault Power Unit.

This opened the door to team orders which allowed Alonso to benefit from a tow down the Kemmel Straight in his final Q3 run.

“The lap was OK, I think it could’ve been a little bit better. We only had one set in Q3 so we gave the tow to Esteban on the first attempt with the scrubbed set and he gave the tow to me on the second attempt.

“Obviously if we had two sets we could’ve been a little bit faster but position wise it would not change much because the guys in front, they are too much ahead. So I think we maximised the positions.”

Sunday’s Grand Prix will see the Carlos Sainz and Sergio Perez go head to head on the front-row for the first time of the season.

Alonso already has an idea of how he hopes the opening lap will play out: “Maybe Carlos and Checo will touch and I have a free way in front of me. That is what I will visualise tonight!”