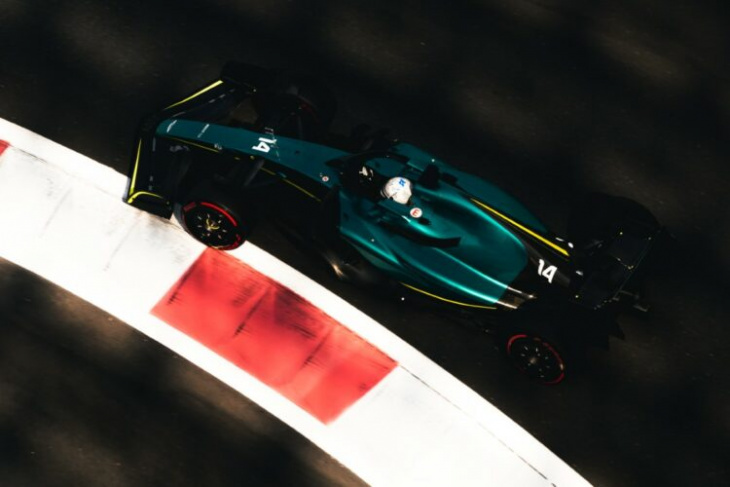 A buoyant Fernando Alonso believes Aston Martin has “outstanding” potential after he completed his first Formula 1 run for the team in Abu Dhabi.

Alonso has signed for Aston Martin on a multi-year deal and was permitted by Alpine to test the AMR22 – albeit in an unbranded livery – at Yas Marina on Tuesday.

Alonso was first out on track when the session began and ran through an intense programme, completing 97 laps, before handing over to new team-mate Lance Stroll for the final few hours of proceedings.

Alonso’s best time, a 1:26.312s, left him third on the leaderboard, just under a second behind pacesetter Charles Leclerc.

“I cannot be overconfident for sure, as everything is going to change next year,” said Alonso. “But the feeling I had in the garage with the guys, the potential of the team, the talent that I see in the engineering room here, is outstanding, so I’m really, really, really happy right now.

Expanding further on his impressions of the AMR22, Alonso said: “I was happily surprised on everything, but this year’s car is not near what we will run next year, so it is not anything to get confident or anything like that, it’s not that it is going to be a continuation of this car.

“For sure they had a very strong weekend here, Sebastian [Vettel] qualifying in front of me, so I don’t think there was much of a difference between Aston and Alpine on the weekend, and I felt basically the same as well, I felt a very competitive car.”

He was also encouraged by the responsive nature of the AMR22.

“Nothing really surprised me, the car was behaving well, “he said. “We had some concerns on the steering feedback as on Alpine the first year we had to work a lot for nearly five months on steering assistance and feedback.

“We had some concerns that we spoke the last few weeks so it was a happy surprise that I felt ok with Aston’s system and we don’t need to change much.”

Aston Martin house In Japan, where so many apartments aren’t much bigger than the cabin of a Bentley, it probably doesn’t makes sense that Aston Martin plans to build a luxury home with a vista overlooking Tokyo. Of course, the home, designed as it will be by Aston Martin artists, ...

A “happy surprise” with a key part of the functionality of Aston Martin’s Formula 1 car and “outstanding” reliability featured in Fernando Alonso’s glowing verdict of his first test with his new team. Alonso drove Aston Martin’s 2022 car in the first five hours of F1’s post-season Abu Dhabi ...