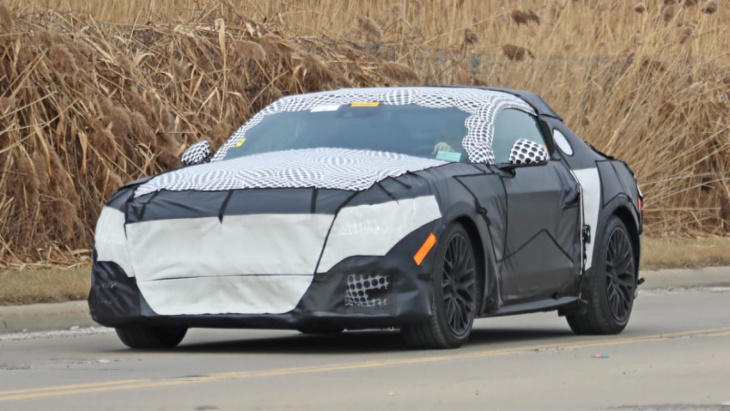 The new Ford Mustang will be revealed to the world in a matter of hours when the covers come off at the 2022 Detroit Motor Show tomorrow. To remind us of the imminently incoming muscle car, Ford has released another teaser video on its social media channels showing the new Mustang’s GT Performance badge on the boot lid. In a previous teaser clip we were shown a manual transmission logo and both teaser videos incorporate the trademark Mustang V8 soundtrack.

A graphic of the gear knob on the first video confirmed that a six-speed manual gearbox will be offered, most likely alongside a version of the current Mustang’s 10-speed automatic transmission. As for the V8, we’re not sure if it’ll be a continuation of the 5.0-litre naturally-aspirated unit of the outgoing model or an all-new engine, but we don’t have long to wait.

Our previous spy shots of the new Ford Mustang taken outside Ford’s Michigan’s Flat Rock Assembly Plant suggest the proportions will remain the same, and it’ll use a dual-exit exhaust system. Test cars still feature heavy camouflage so there’s not much given away in terms of styling just yet. The retention of the current car’s production line suggests the new car isn’t likely to deviate a whole lot from the usual Mustang formula.

Excited to confirm that we’ll unveil the all-new, seventh-generation @FordMustang September 14 at the Detroit Auto Show. It’s a stunning car and I’m excited to share it with the world! 🐎 #SaveTheManuals pic.twitter.com/d2kdQioBWY

The current Mustang is the first in the model’s history to be sold by Ford in the UK. It’s now only available with the V8, with the Blue Oval canning the 2.3-litre turbocharged four-cylinder Ecoboost model.

Even after the reveal of the new Mustang, we may have some time to wait before sales start in the UK – the coupe could take until 2024 to arrive, which would coincide with the Mustang’s 60th anniversary.

What is a heavy-duty truck? Ram trucks get a style makeover Chevy HD gets new style, keeps the Duramax Ford’s Super Duty trucks are all new Heavy duty trucks are low-volume machines that, usually, don’t get much attention. But not this year. All three major manufacturers of big pickup ...


View more: Ram, Chevy and Ford All Have New 2023 Heavy Duty Trucks: What We Know


View more: The Ford Maverick XL Is a Working-Class Hero, and I'm Kind of Obsessed

Ford Philippines officially marks its 25th year in the country, a true testament to its commitment to help boost the local automotive industry with its wide portfolio of Ford vehicles and services. It was in 1997 when Ford Motor Company Philippines, Inc. (FMCPI), Ford Motor Company’s Philippine-based subsidiary, was ...

BlueOval City will assemble the Lightning, the all-electric version of the next-generation F-Series pickup truck, as well as other Ford and Lincoln EVs. A Korean company, SK On, will manufacture EV batteries at a separate plant within the complex.

Ford has established an independent company in China called Ford Electric Mach Technologies (FMeT) for the development of electric vehicles. The manufacturer is also establishing an independent direct sales network in the country under the Ford Select brand. Ford China announced the establishment of FMeT on its official WeChat ...


View more: Is the Ford Ranger Stormtrak good for towing?