Powered by a 725hp twelve-cylinder engine, the long-awaited Ferrari Purosangue is set to become the most powerful luxury SUV on the market, posing a serious challenge to the likes of the Lamborghini Urus and Aston Martin DBX.

While its luxury rivals have capitalised on the growing popularity of SUV models in recent years, Ferrari has abstained from the SUV market – until now. Built from the ground up, the performance-focused Ferrari Purosangue debuts with a 725hp twelve-cylinder engine, which makes it even more powerful than the Aston Martin DBX 707 that launched earlier this year.

However, Ferrari is rather reluctant to call its newest model an SUV. The Italian brand sees the Purosangue as a continuation of its ‘thoroughbred’ supercar lineage – a front-engined ‘sports car’ with an eight-speed automatic gearbox that can complete a 0-62mph sprint in 3.3 seconds.

Nevertheless, the Purosangue is certainly a major departure from Ferrari’s current sports car range, most notably due to its 19cm of ground clearance. This is also the manufacturer’s first ever four-door model to go into production, and will soon become the largest car in the Ferrari line-up – though the Lamborghini Urus is slightly longer.

With its larger size, Ferrari has gone to considerable lengths to make the Purosangue as light and aerodynamic as possible to aid its performance. To save a few pounds, the SUV’s foundations are made of aluminium, while its roof is made of carbon fibre. 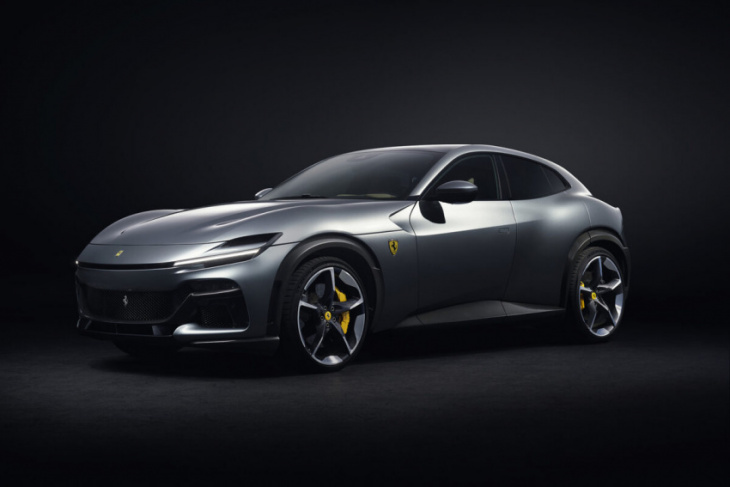 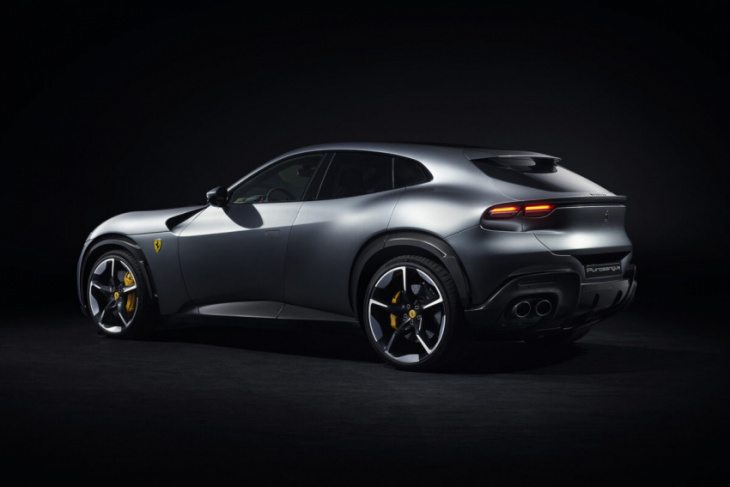 Ferrari says that the car’s curvy silhouette has been designed so that air flows ‘seamlessly’ across the car’s front fascia, into the muscular bonnet’s air intakes to cool the powerful engine, or over the roof and through the suspended spoiler mounted above the rear window.

The Purosangue has been built with the brand’s “iconic” V12 engine in mind, and this is the only powertrain option unveiled so far. Ferrari has started to electrify its range in recent years – launching the 296 GTB and SF90 Stradale plug-in hybrid sports cars.

The SUV comes with a number of features to enhance its driving dynamics and on-the-road comfort. A ‘6-way Chassis Dynamic Sensor’ monitors the car’s speed and acceleration to make subtle adjustments to the four-wheel drive independent steering system (each wheel can turn independently to one another) and new suspension technology that is meant to improve body control in high speed corners and ride comfort on uneven tarmac.

To make the Purosangue more practical, Ferrari engineers have designed the SUV’s doors to open at a wider angle than the brand’s supercars, and the rear tailgate is powered by an electric motor – opening to reveal 487 litres of boot space. 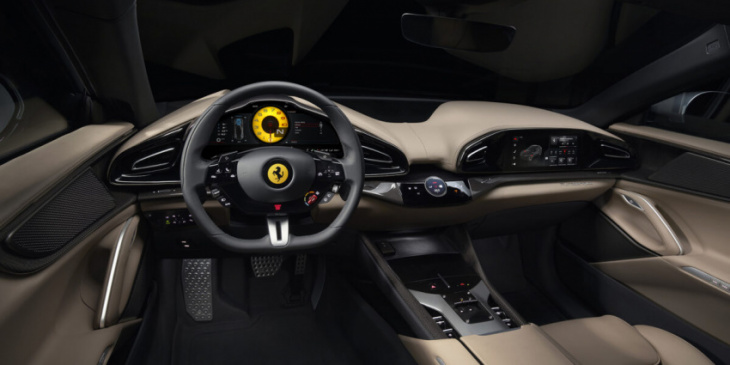 Stepping inside, the interior layout and trim is very similar to the SF90 Stradale, with upholstery trimmed in light brown leather and a 10-inch infotainment console fitted on the passenger side of the dashboard. Ferrari adds that the SUV comes equipped with the brand’s “most powerful audio system ever”, and all four seats are independently adjustable and come with a heating function.

That sums up this first look at the Purosangue – Ferrari is yet to announce the car’s release date, as well as its UK pricing and fuel efficiency figures. We expect these details to arrive in the coming months.