Mercedes-Benz has unveiled the next iteration of the Mercedes-AMG C 63 saloon and estate, and while the former model’s petrol V8 has been scrapped in favour of a smaller hybrid engine, the new model is more powerful than ever before.

Based on the current-generation C-Class, this new model is officially named the ‘C 63 S E Performance’, and will soon become one of the most powerful performance cars on the UK market, with over 150hp more than rivals like the Audi RS 4 and BMW M3, thanks to its new hybridised powertrain. All models make use of a nine-speed automatic gearbox.

The car is powered by the same 2.0-litre four-cylinder turbocharged engine that can be found in the Mercedes-AMG A 45 hot hatch, but with the addition of an electric motor on the front axle and another in the rear – boosting the engine’s output from 465hp to 680hp, as well as providing all-wheel drive traction in high-speed corners.

This means that the new C 63 is more powerful than plug-in hybrid supercars like the Ferrari 296 GTB, but its heavy curb weight of 2,115kg means that it is not quite as fast. Mercedes-AMG says that the saloon version can complete a 0-62mph sprint in 3.4 seconds, which is still very impressive for a car of this size, but this is the same pace as the less powerful but much lighter BMW M3.

To avoid making the car even heavier, Mercedes-AMG opted to overlook the 25kWh plug-in hybrid ‘C 300 e’ powertrain in the regular C-Class line-up and equip the new C 63 with a smaller 6kWh battery unit, which allows the car to travel on electric-only power for up to eight miles before the petrol engine has to kick in once again.

To clarify, you don’t plug this model in to charge the battery, it charges itself using energy recouped from the brakes being used. There are four settings for this brake ‘recuperation’, the highest of which makes one-pedal driving possible – take your foot off the accelerator and the car comes to a halt. 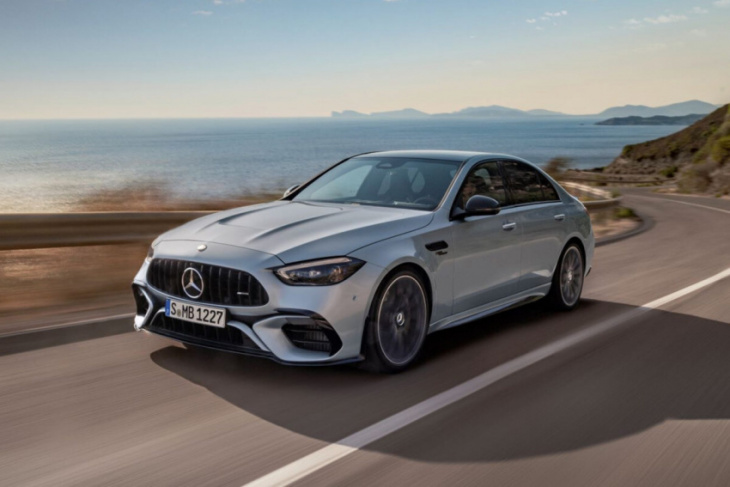 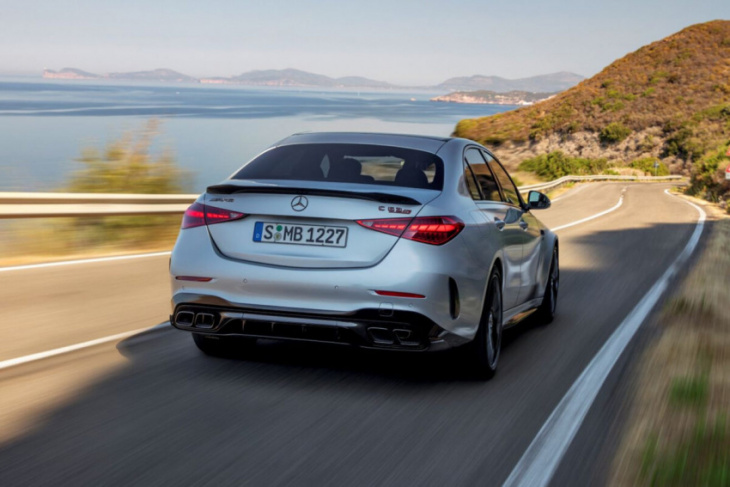 Like its predecessor, the new C 63 is slightly longer and wider than the C-Class it is based on, with more muscular bodywork, a duck-lip spoiler and a vertically-striped front grille. Both saloon and estate models sit on 19-inch alloy wheels as standard, but 20-inch alloys will also be available for an additional fee.

Stepping inside, the car’s interior is packed with on-board tech and trimmed in nappa leather. Mercedes-AMG says that ‘many’ different interior colours will be available, and weight-saving ‘AMG Performance’ seats will be available on the options list.

The C 63 comes with a digital instrument cluster behind the steering wheel and a portrait-oriented central infotainment screen like the latest C-Class, but with unique ‘display styles’ and graphics exclusive to the Mercedes-AMG marque. A head-up display, which projects driving information on to the windscreen, is optional.

To monitor its enhanced performance, the car comes with a data logger for use on the race track, which records speed, acceleration, steering angle and brake pedal actuation stats ten times per second, as well as displaying lap and sector times.

That just about sums up what we know about the Mercedes-AMG C 63 so far. Further details, such as the model’s UK pricing and arrival date, will be announced in the coming months.