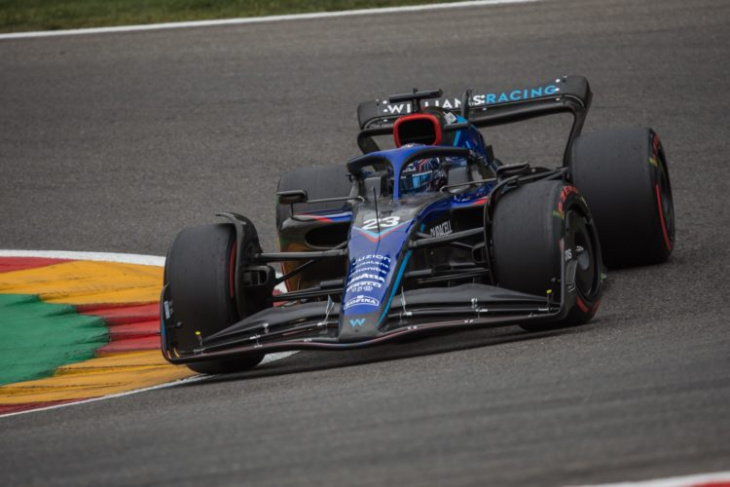 Alex Albon says he will be aggressive from a season-best sixth on the grid after starring during qualifying for Formula 1’s Belgian Grand Prix.

Albon had yet to secure a Q3 appearance in 2022 but utilised Williams’ straight-line speed to grab a spot inside the top 10 at Spa-Francorchamps.

Albon went on to qualify in ninth place but due to a raft of penalties for drivers elsewhere he is set to line up from sixth on the grid.

“We’ve been quietly confident all weekend; we were looking for Q2, so Q3 is a bit unexpected but we’re very happy – this is a great result for us,” said Albon.

“The car was feeling strong, we’re still learning our package and we made some changes from FP3 which helped the car for qualifying.

Hamilton: Mercedes’ lack of pace ‘a real kick in the teeth’

“We know our car likes low downforce and, when track conditions are in a place that suits us, we can extract a good lap time out of the car. We were P9 on pure pace.

“Everyone seemed to have clear runs today and we were only a couple of tenths behind Mercedes, so it shows that in certain situations we can really maximise what we have.

“With the penalties we are starting sixth and so we have to try to hold on and maybe even overtake at the start.

“We’ve got a car that, on paper, should be hard to overtake as we are quick on the straights, but it’s also not a track like Monaco where it’s easy to keep people behind, so it’ll be elbows out tomorrow.”

Williams team-mate Nicholas Latifi is due to line up from 11th on the grid.